The bears fired their first shot across the bow this week with sharp declines on Friday and Monday. The bulls were not in the mood to allow even a modest pullback and quickly stepped back into the market. Short-term, an oversold bounce after a 2.5% decline (Friday-Monday) is pretty normal stuff and does not change my overall thesis. I still think we are entering a corrective period within a bigger bull market.

What does a correction imply? As noted in this short commentary and video, corrections are like a box of chocolates: you never know what you are going to get. We could see a trading range, a shallow pullback (5%), a deep pullback (10%), an extended pullback (3+ months) or the dreaded surprise. We could even see one of these rotational corrections where an underperforming sector (XLF) moves higher and a leading sector declines (XLK). Nothing is guaranteed.

Market analysis is about making assumptions and trading is about playing the odds. Based on the correction checklist (details below), my analysis suggests that a correction will unfold sooner rather than later. Based on the size of the October-January advance (15%), the odds also favor a corrective period.

A Harami Follows Signs of Excess

The weekly chart shows the signs of excess in mid January. First, the PPO(1,40,0) hit +9.74% and this is close enough to the +10% levels seen in January 2018. This means the close was 9.74% above the 40-week EMA at one point, which is quite extended. Second, the two candles in mid January were the largest since the advance began. This shows outsized moves (excess) after an extended advance. Third, the 1-week Rate-of-Change hit 1.92% and this was the biggest weekly gain since September. 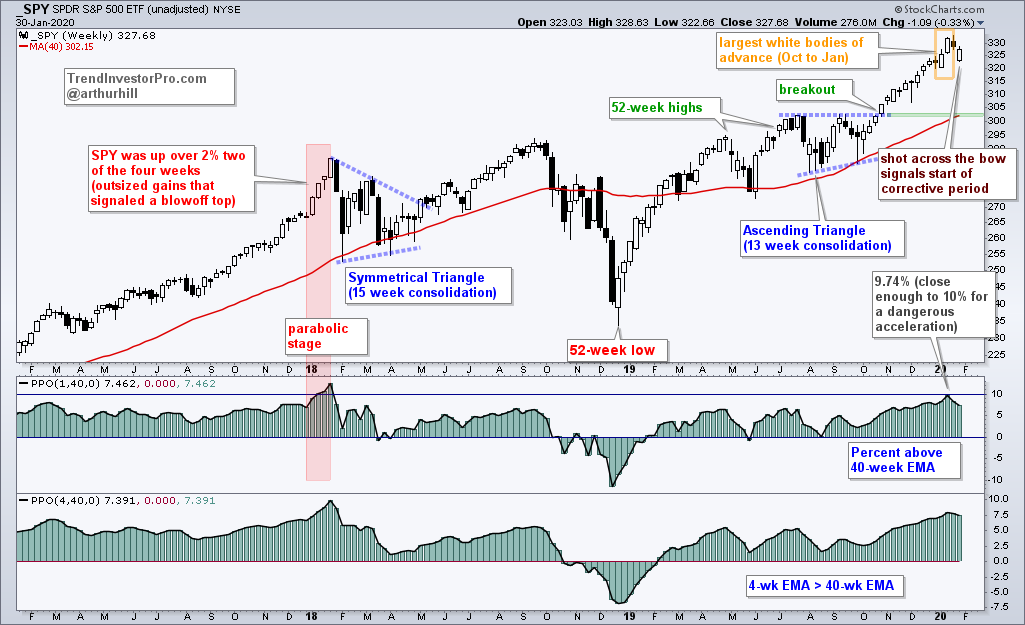 On the price chart, SPY formed a harami the prior week. This pattern forms when the body of the second candle is inside the body of the first. It was almost an inside week, but not quite because the high was just above the prior high. The harami shows indecision after an advance and can lead to a reversal. This week’s decline confirms the harami and we have a short-term candlestick reversal working.

The next chart shows daily bars for the S&P 500. The ovals highlight the filled gap at 3280, the gap down on Monday, the decline greater than 1%, the ATR(2) move above 30 and the S&P 500 %Above 20-day EMA (!GT20SPX) move below 50%. The red dashed lines show when the last three indicators triggered bearish. The first signaled the start of the May correction, the second signaled the start of the early August correction and the third did not last long as the index bottomed two days later. 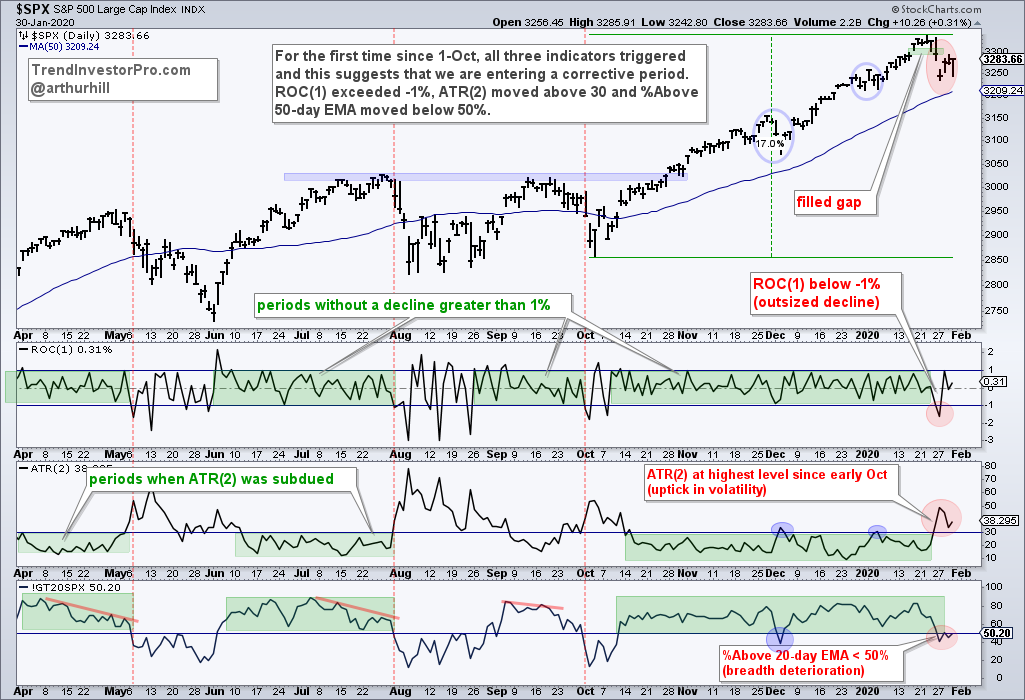 At this point, I could draw Fibonacci retracements from the December, May, August and October lows (to the January high). I could find some moving averages that held in the past. For example, the 70-week moving average held in May. But I will keep it clean and simple. First, the rising 40-week SMA comes into play in the low 300s. This is equivalent to the 200-day SMA. Second, a 50-61.8% retracement of the Oct-Jan advance would extend to the 305-310 area. Third, broken resistance turns support in the 302 area. Thus, a correction back to the 300-310 is my base case, which is seven to ten percent below the January high. 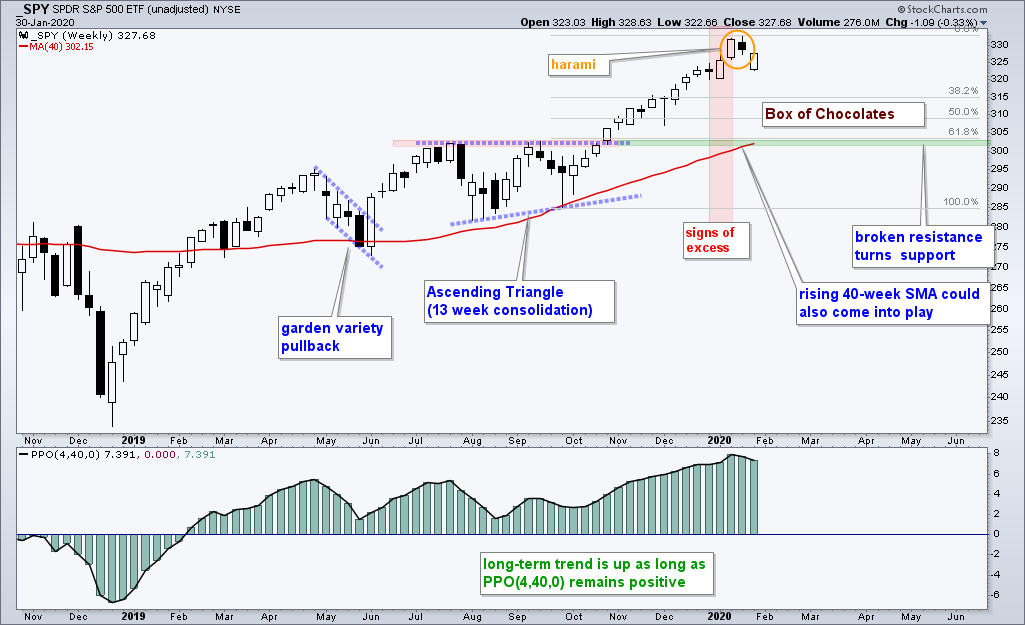 The red zones highlight general risk-off periods when the ratios were falling, while the green zones highlight general risk-on periods when the ratios were rising. The ratios rise when the riskier ETF outperforms and fall when the safer ETF outperforms. Risk was clearly “on” from early October to early January, but a shift started in January when three of the five ratios turned down. The Momentum relative to Minimum Volatility ratio continues to rise, while the Stocks relative to Treasuries ratio turned down the last two weeks. Treasuries represent the ultimate safe-haven asset and they are outperforming stocks. Four of the five ratios are signaling risk-off and this is a headwind for stocks. 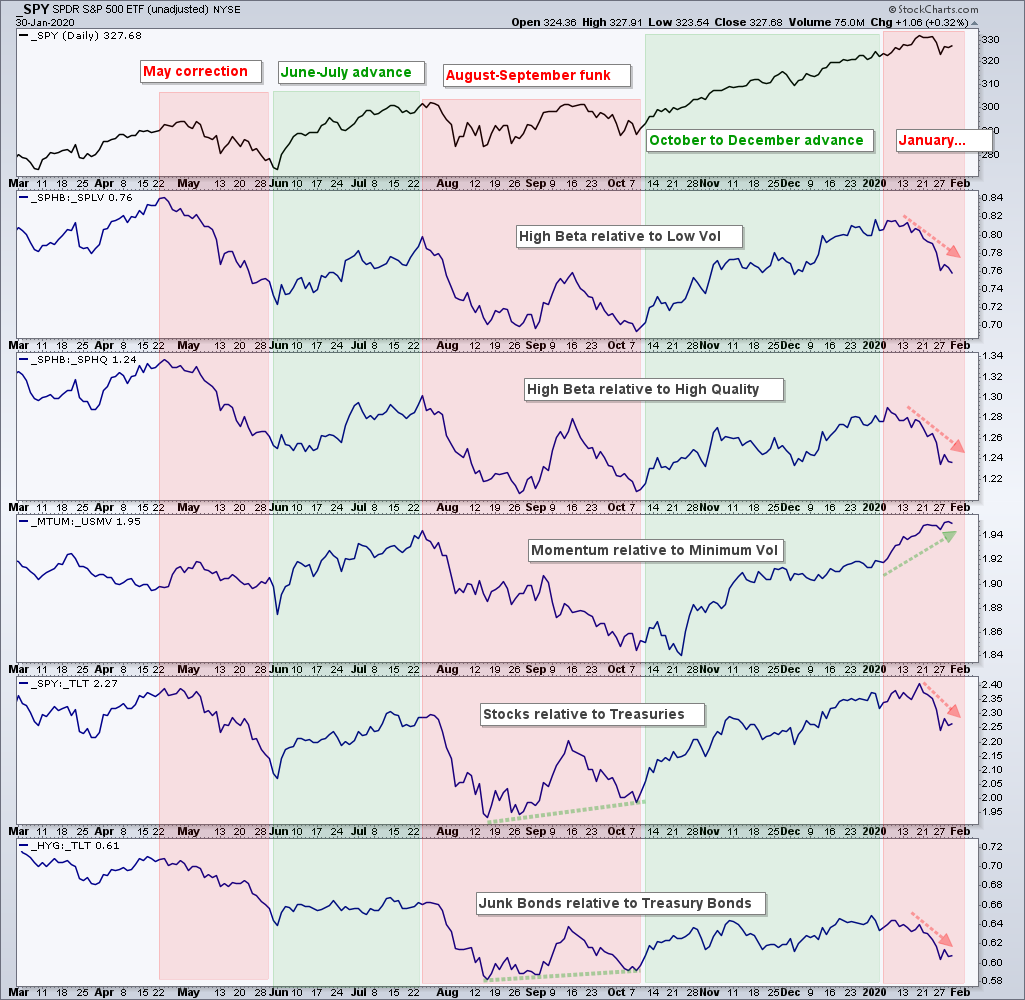 There is no change in the Index Breadth Model, which remains bullish overall. Keep in mind that this model is not designed to signal a correction. Instead, it is designed to signal bigger trend changes (bull market environment versus bear market environment). All nine indicators are bullish, but we are seeing some deterioration in S&P SmallCap 600 High-Low% ($SMLHLP). The chart below shows this indicator hitting its lowest point since August as new lows suddenly expanded. This is not a total surprise because the S&P SmallCap 600 is down 1.78% this month and the S&P 500 is up 1.64%. This expansion in new lows shows just how fragile small-caps are right now. 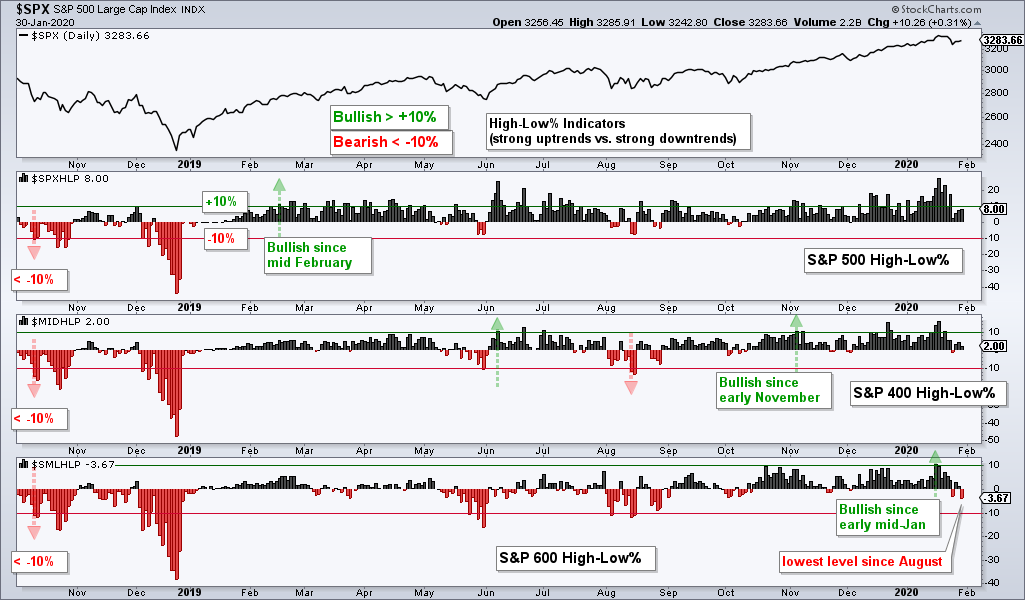 Several indicators turned down over the last one to two weeks, but selling pressure was not strong enough to trigger bearish signals and affect the Sector Breadth Model. Ten of the eleven sectors are net bullish and 29 of 33 indicators are on active bullish signals. The Energy sector is the only sector that is net bearish and the Materials sector has one bearish signal. Another week of selling pressure could trigger some more bearish signals, but I will cross that bridge when and if it gets here. Typically, we will see a deterioration in the Sector Breadth Model during a correction, but the weight of the evidence is bullish until the sum of the weighted signals turns negative. 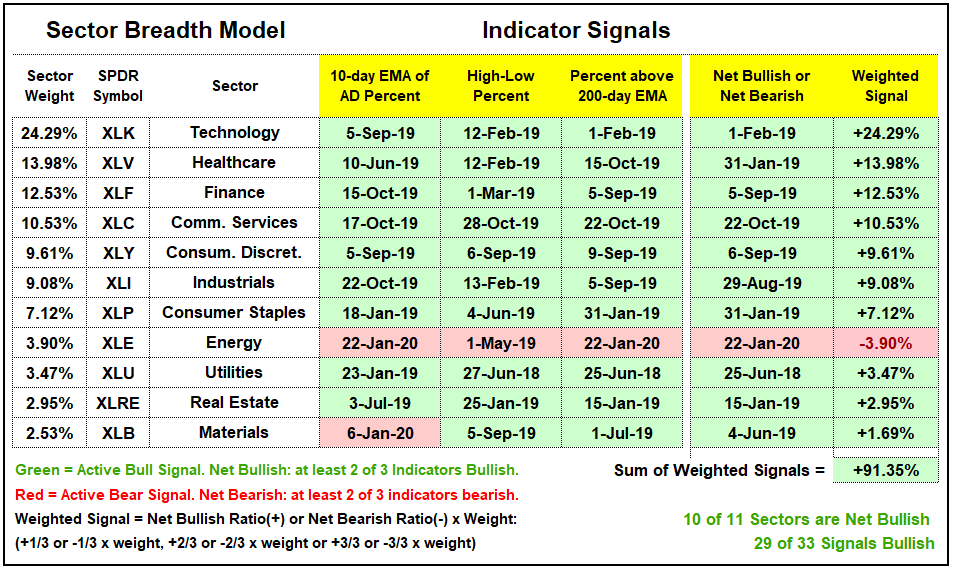 Total Assets on the Fed’s Balance Sheet stopped growing over the last four weeks, but the System Open Market Account (SOMA) increased. Again, we have a mixed bag at the Fed. The chart below shows both over the last 15 months. Notice that both fell from January to September and the S&P 500 still managed to move higher, sharply higher. Fed Assets started increasing in early September with a move above the 10-week SMA and SOMA turned up in early October. The Fed plays an important role, but we should not be totally dependent on the Fed for broad market timing. Right now the Fed is adding liquidity and this is net positive for stocks. This, however, does not guarantee an uptrend or reduce the odds of a correction. It is just one piece of a complicated puzzle. Links: Fed Balance Sheet and  System Open Market Account (SOMA). 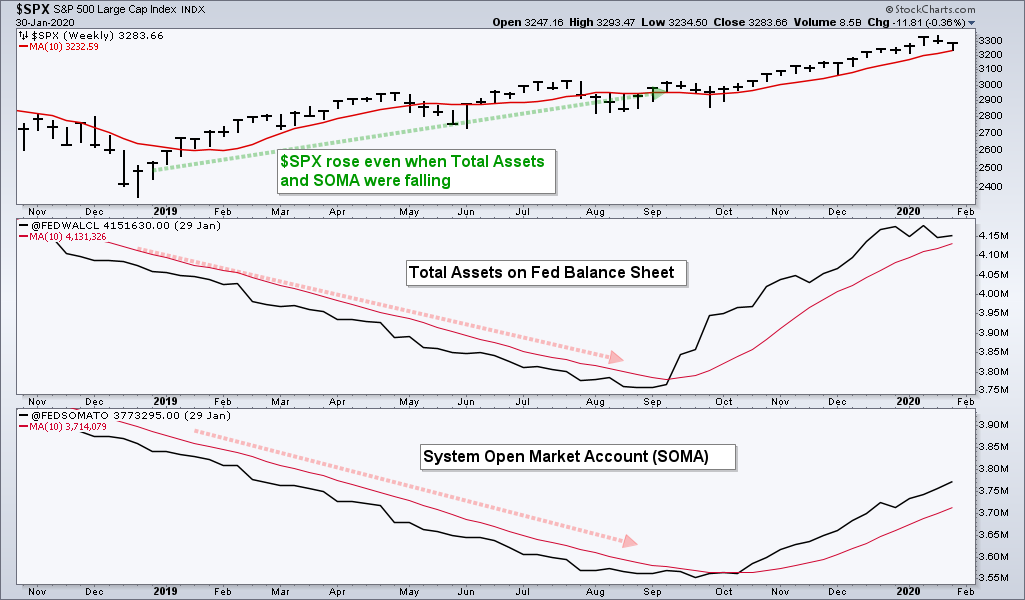 The long-term evidence remains bullish. The S&P 500 is above its rising 200-day SMA and the 20-day SMA is above the 200-day SMA. The Index and Sector Breadth Models are also in bull mode. The Index Breadth Model is more vulnerable to change because small-caps and mid-caps account for two thirds of the signals. However, small and mid caps account for less than 20% of the US equity market, which means the S&P 500 accounts for over 80%. The S&P 500 moving averages and Sector Breadth Models should be able to withstand a correction.

The short-term evidence points to a corrective period ahead. The S&P 500 was up some 15% from October to January without a correction and showed signs of excess in mid January. These signs of excess were followed by short-term bearish signals and a downturn in four risk ratios. I do not know how far a correction will extend or how long it will last, but it could set up the next big opportunity in the coming weeks or months.