There are now three ETF groups showing material weakness. The eight ETFs in the last group are in clear downtrends. ETFs in the other two groups either peaked in late December or experienced failed breakouts this month. All broke to new lows for January this week. The Russell 2000 ETF and S&P MidCap 400 SPDR failed to hold their flag/pennant lows this week. The Regional Bank ETF and Biotech SPDR did not exceed their December highs this month and are leading the decliners.

Basically, we are seeing the correction broaden as more equity-related ETFs weaken and the defensive names strengthen. I still consider current weakness as a correction within the bull market, but it may need time to run its course. Sorry, I do not know how long it will last or how far it will extend. I will just take it one day/week at a time and watch the charts unfold.

A few stock-related ETFs are holding up with small gains over the last five days. In contrast, the 5-day Rate-of-Change is -1.42% for SPY and  -2.17% for IWM. ETFs in this first group have small gains the last five days and are near their highs. Some of the non-equity ETFs are at highs and leading (PFF, LQD and REM, to some extent).

The first chart shows FINX gapping down on Monday and then recovering with a surge the last two days. The ETF even recorded a new closing high. Despite this show of strength, I doubt if FINX would be immune to a broad market correction. It is still a stock-related ETF with quite a few high-beta stocks. Also notice that it closed below the Chandelier Exit (22,3) on Monday. This indicator was suggested in the reports this weekend to set trailing stops on ETFs with big gains. Note that the Chandelier Exit is NOT used to trigger bearish signals. 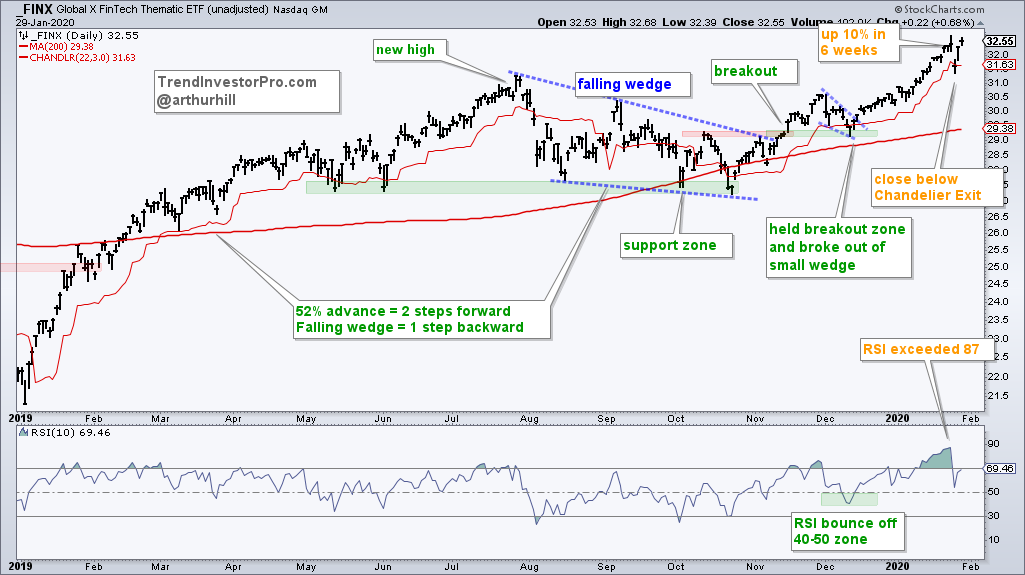 The Home Construction ETF (ITB) held up well on Monday and moved to a new high on Tuesday. The breakouts and new highs are bullish with the prior consolidation turning into a support zone. The first area to watch is 45-46, should we see a “throwback” to the breakout zone. 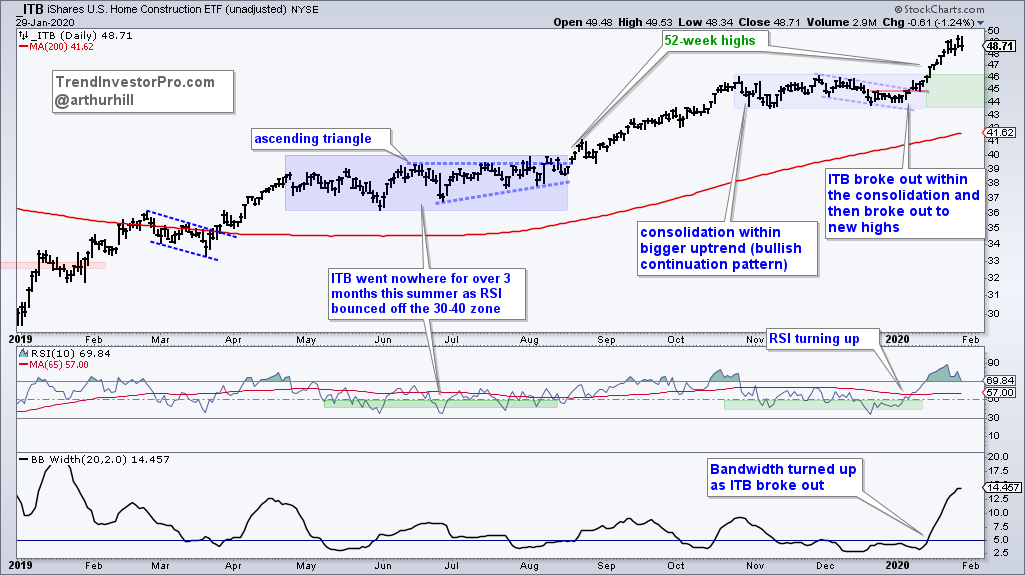 The Aerospace & Defense ETF (XAR) did not hit a new high this week, but its 5-day ROC is positive and the ETF is very close to a new high. Overall, XAR sports a steady uptrend since March with a zigzag higher. A “zag” lower is possible within this bigger uptrend. Should we get a playable pullback, I would watch the 110 area for support. 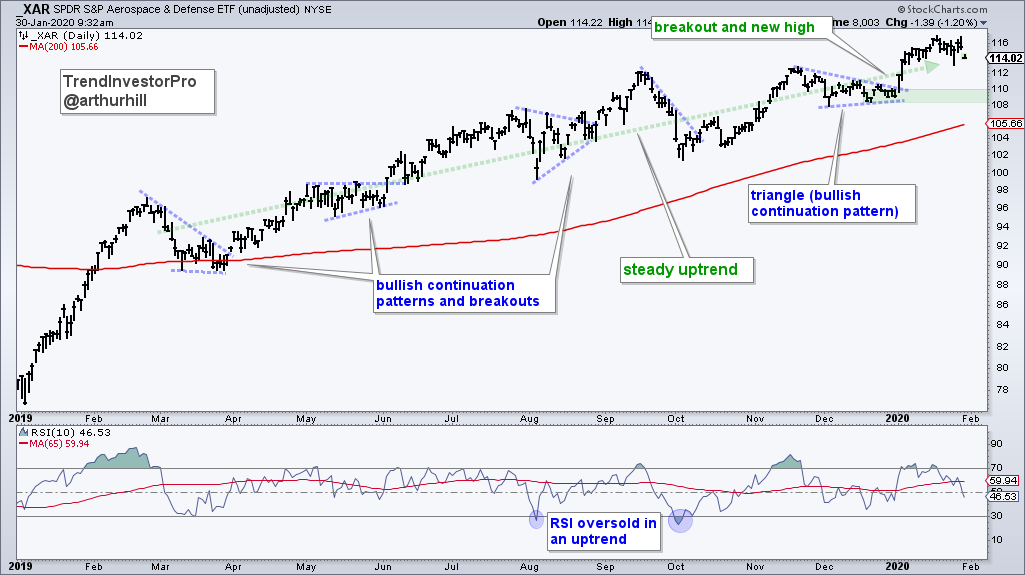 The next group of ETFs are in some sort of slow and steady advance. The Consumer Discretionary SPDR (XLY) and Industrials SPDR (XLI) were late to this party because they did not break out to new highs until December and November, respectively. Nevertheless, both are in jagged uptrends and holding above their breakouts zones for now. The Consumer Staples SPDR (XLP) broke out in late November and hit new highs in January. All three fell back from their recent highs and could correct back to their rising 200-day SMAs. 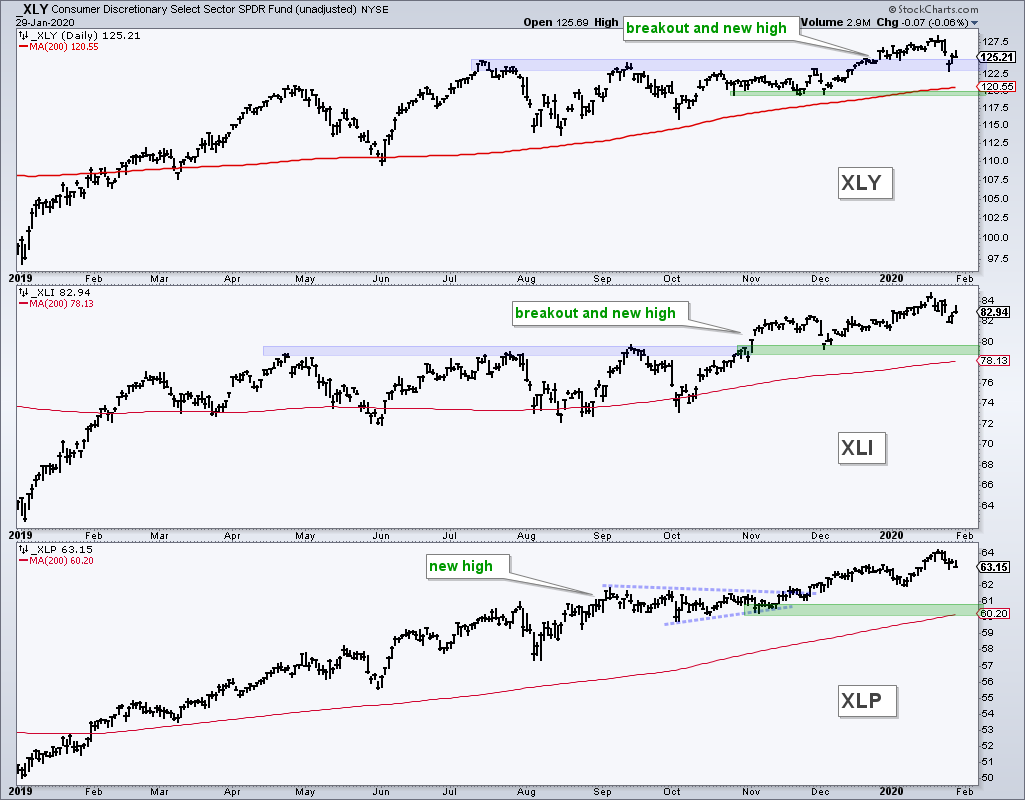 The next group of ETFs broke out of falling wedges or channels at some point over the last few weeks. These breakouts are holding and bullish, and signal a continuation of bigger uptrends. The REIT ETF (IYR), Gold SPDR (GLD) and Aggregate Bond ETF (AGG) hit new highs recently and are the strongest. The first chart shows IYR breaking out in late December and extending on this breakout. REITs are holding up now, but there is always a danger that the correction broadens. As such, chartists can also consider the Chandelier Exit (22,3) for a stop-loss strategy. 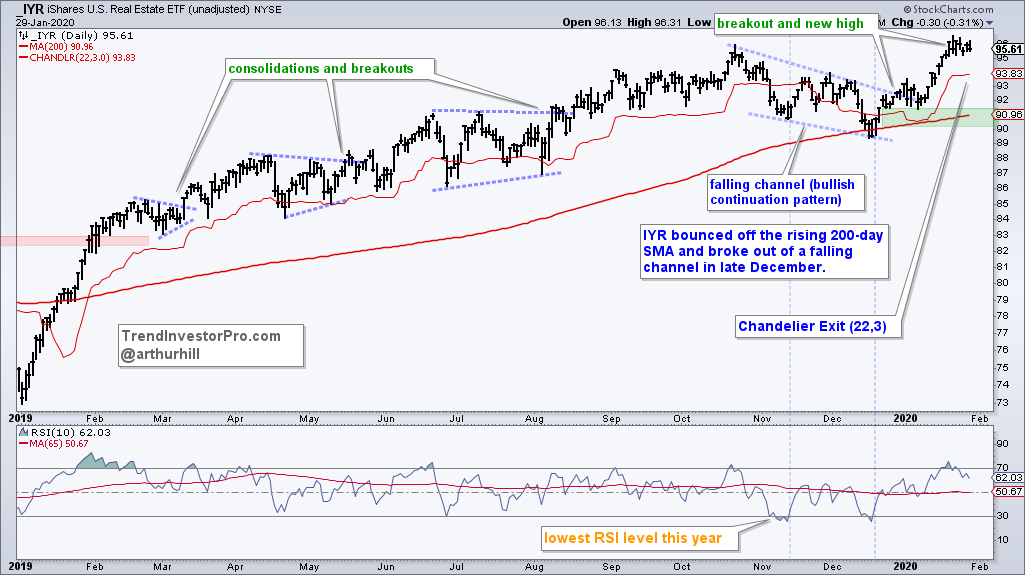 The 20+ Yr Treasury Bond ETF (TLT) broke out of its falling wedge on January 15th, around three weeks after IYR and XLRE. Perhaps there is a relationship here because REITs (and Utes) are considered bond proxies. The breakout in TLT means Treasury yields broke down and moved lower. Based on this breakout and surge, I would expect TLT to hit new highs in the coming weeks. Note that the Aggregate Bond ETF (AGG) and Corporate Bond ETF (LQD) already hit new highs. 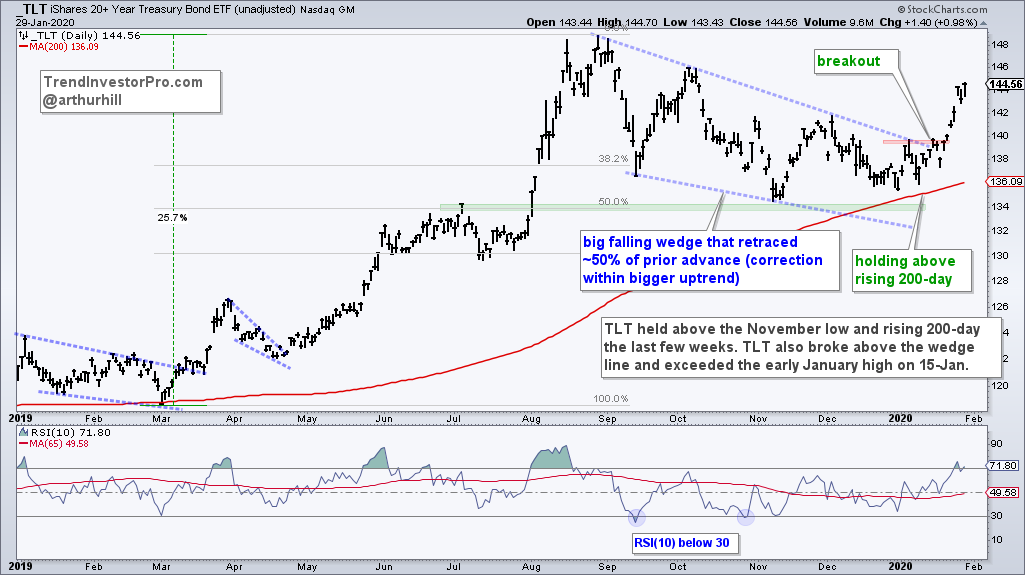 The Gold SPDR (GLD) broke out around Christmas and surged to a new high in early December. The ETF then fell back with a small wedge and broke out again the prior week. GLD is clearly leading with another new high on Monday. Also note that GLD is up 3.89% this month, even with the US Dollar Index gaining 1.83% in January. 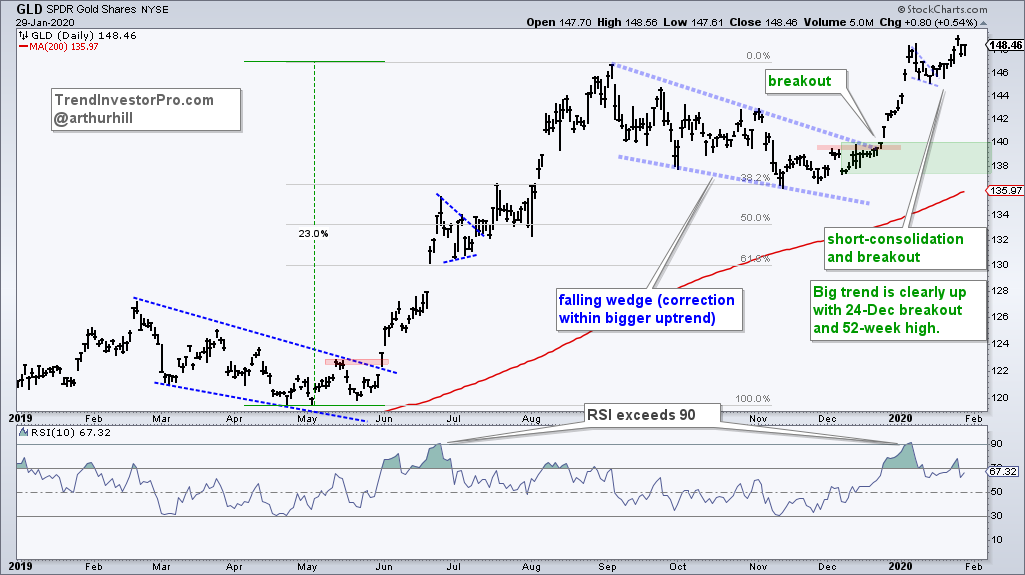 The Gold Miners ETF (GDX) is not as strong as gold because there is a tie to the stock market. It is still an ETF that holds stocks. Nevertheless, GDX still looks bullish with the big wedge breakout in late December and the smaller wedge breakout the prior week. In addition, the breakout zone held around 28 with the throwback. I would expect prices to move higher based on the bullish chart and recent performance in gold. 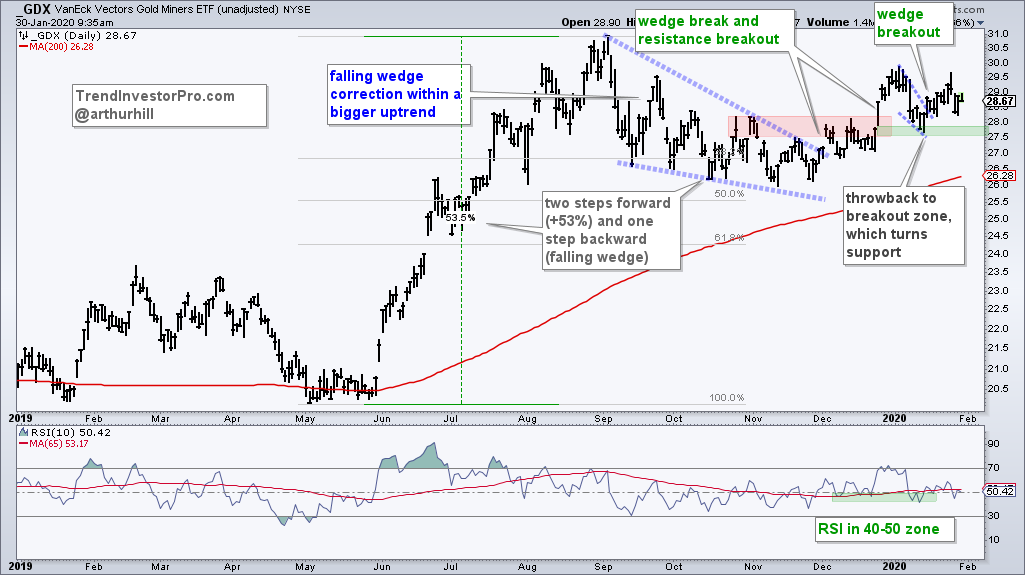 The S&P 500 Momentum ETF (MTUM), S&P 500 Minimum Volatility ETF (USMV) and Utilities SPDR (XLU) are in strong uptrends, but the upside acceleration over the last few weeks is cause for concern as all three became seriously overbought recently. The chart below shows XLU surging some 8% in three weeks. The ETF is currently over 10% above its rising 200-day EMA and RSI(10) moved above 90 for the first time ever. There is normal strong upside momentum (RSI > 70) and then there is scary strong upside momentum (RSI > 90). 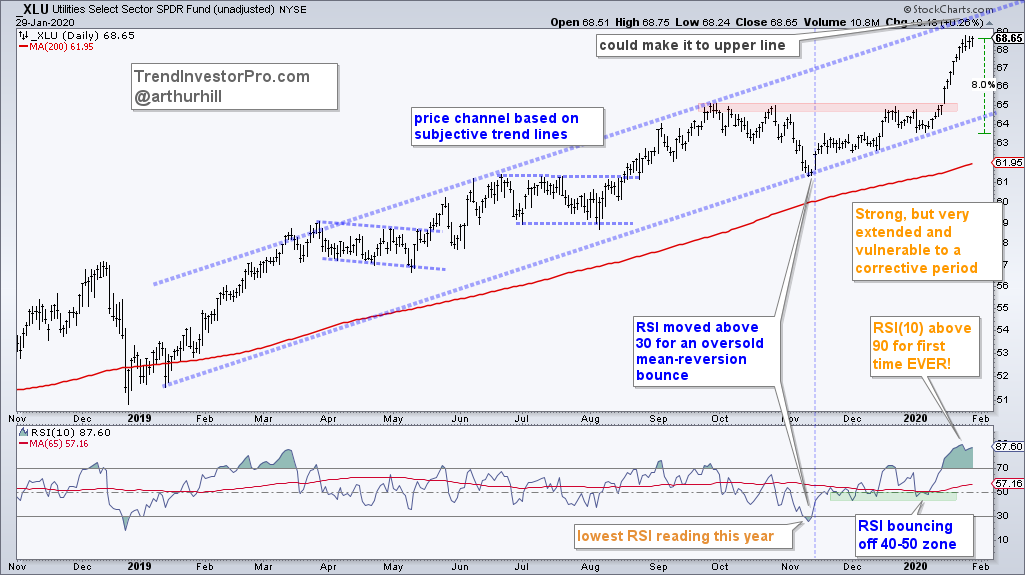 Gap Down or Sharp Decline after Double-Digit Advance

Now we get to the biggest group of them all. These ETFs hit new highs in January and then fell sharply the last one to two weeks. Many gapped down and these gaps could be bearish breakaway gaps. QQQ is the poster child of the big advances with a 24% gain from early October to late January. The ETF was overbought in November, December and January with RSI(10) holding above 70 for 24 of 25 days during the last overbought stage. It was an amazing run, but the bears fired a warning shot on Monday as QQQ gapped down. Even though QQQ bounced the last two days, the gap and outsized decline on Monday suggest that a corrective period is starting. This means QQQ could retrace a portion of the prior decline and/or return to the breakout zone. A shallow retracement would be around 38% (210 area). A deeper retracement could extend to the 61.8% retracement area and/or rising 200-day SMA. 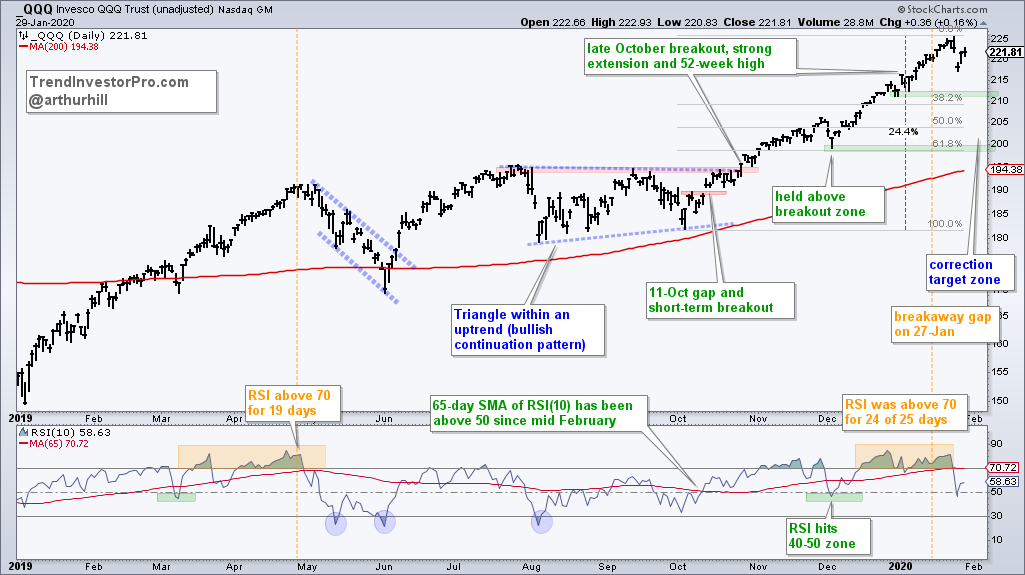 As noted in a video on Monday, corrections are like a box of chocolates: you never know what you are going to get. We could see a sideways trading range, a shallow falling flag/channel, a deep pullback followed by a triangle or a choppy decline back to the 200 area. At this point, I will just wait and watch the correction unfold. A correction at this stage would be healthy and could provide a good entry point in the coming weeks or even months.

The next chart shows the Semiconductor ETF (SOXX) with a new high on Friday and a gap down on Monday. This gap held and looks like a bearish breakaway gap. SOXX was up some 28% from early October to late January. There was one small pullback (flag) along the way, but not much in the way of a correction. SOXX could correct back to the flag zone with a 38-50% retracement. 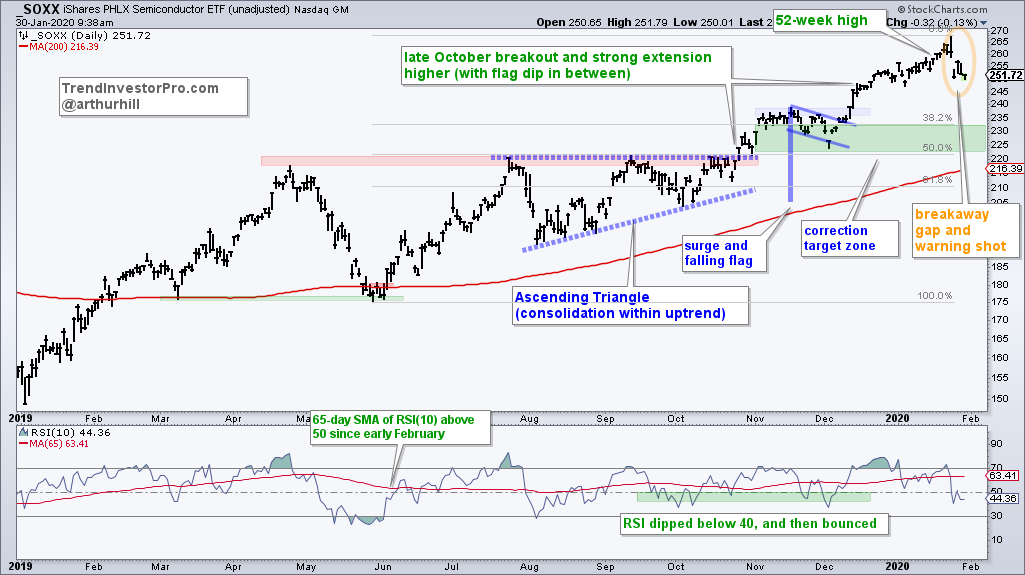 Now we get to the weaker ETFs. The first group of weak ETFs broke out of flag/pennant consolidations and failed to hold these breakouts. Not only did the breakouts fail, but these ETFs also hit new lows for the month on Monday. Thus, they exceeded their flag/pennant lows. The chart below shows the Russell 2000 ETF (IWM) breaking out of a pennant for the third time since July. With another failure, IWM is one of three for successful pennant breakouts, which is not a very good record. The most recent failure puts IWM in corrective mode with the obvious target in the 158-159 area (broken resistance) or 156 area (rising 200-day SMA). 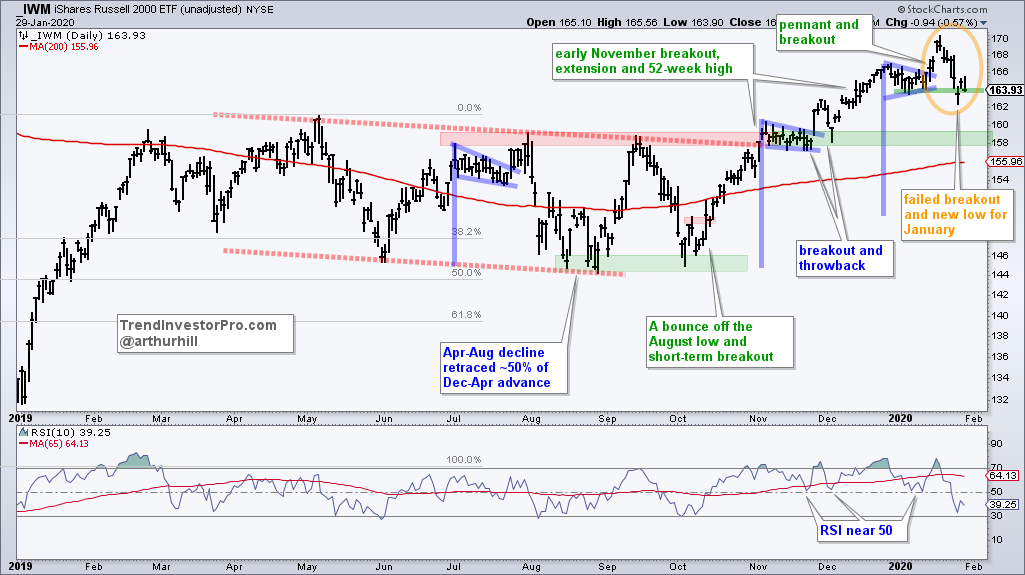 Peaked in late December and Lagging

The next group of ETFs peaked in late December and moved lower the last five weeks or so. This means they did not partake in the January advance and did not exceed their December highs in January. SPY, QQQ and IWM exceeded their December highs at some point this month. Thus, this group has been correcting and underperforming for at least five weeks because they weakened ahead of the broader market.

The Finance SPDR (XLF) hit a new high on December 12th and then stalled out until January 22nd. XLF underperformed during this stall because SPY moved higher. This stall was considered a rest within the bigger uptrend and a bullish continuation pattern, but this outlook changed when XLF broke support and my broad market stance changed on Friday. XLF is now in corrective mode with broken resistance marking the first target in the 28.5-28.7 area. 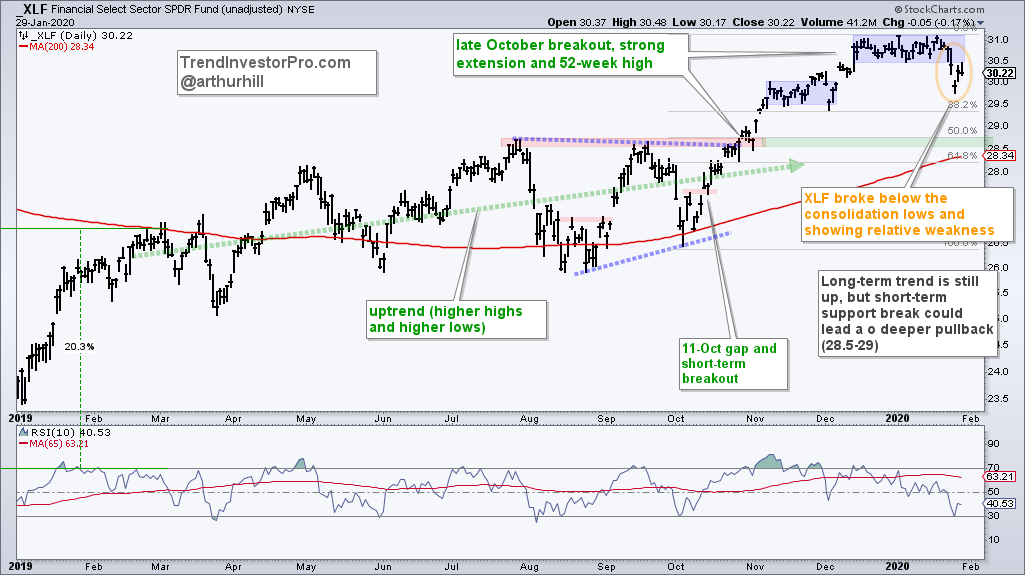 As with IWM, the Bank SPDR (KBE) and Regional Bank ETF (KRE) have a bad record with flags and pennants. KRE formed its third flag/pennant and failed to break out. The means the ETF peaked on December 17-18 and fell around 7.5% the last 28 days. In contrast, SPY is up 2.2% during this timeframe. KRE is nearing a potential target zone as it trades near the early November breakout zone and rising 200-day. However, the ETF is severely lagging and the broader market appears to be moving into corrective mode. 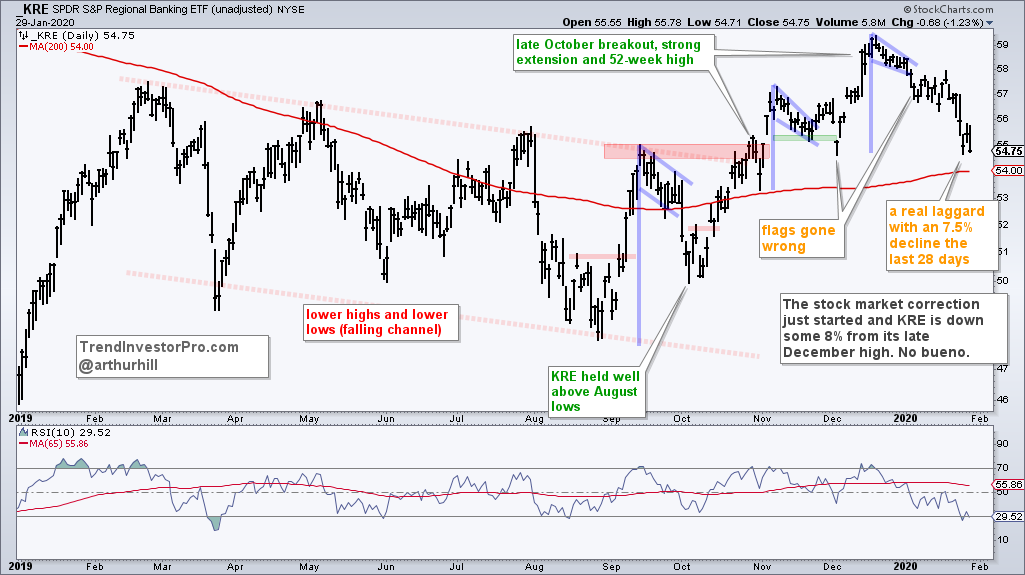 The Biotech SPDR (XBI) and Biotech ETF (IBB) had flag breakouts working two weeks ago, but they never cleared their December highs and the flag breakouts failed as both hit new lows for January. The chart below shows IBB forming a lower high from late December to mid January (red line) and moving below its early January low. The flag breakout failed and it looks like a more extended correction will unfold. 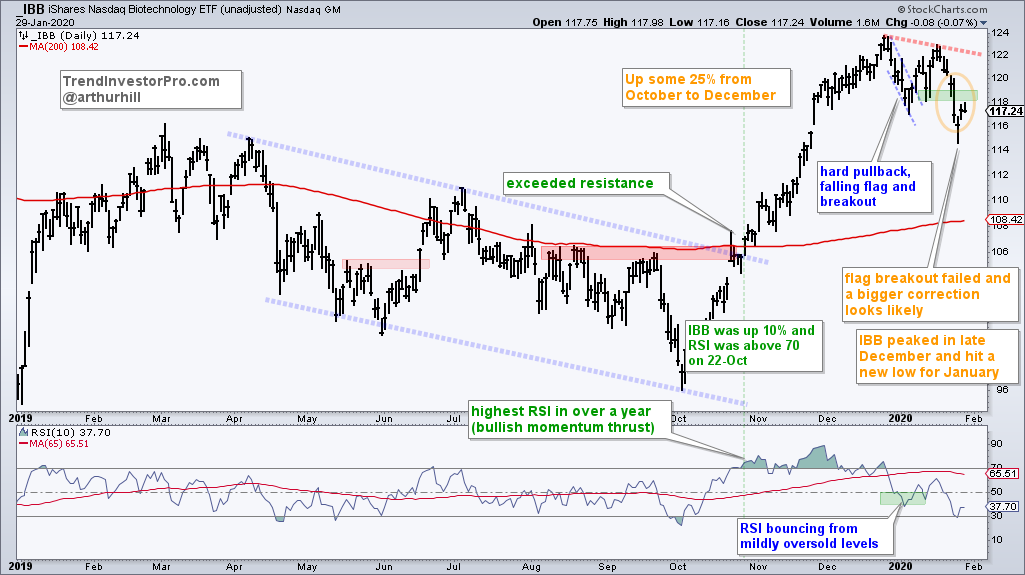 Eight of the sixty ETFs in the core list are in downtrends. All eight were below their falling 200-day SMAs in October. The Metals & Mining SPDR (XME) and Strategic Metals ETF (REMX) attempted trend reversals with breakouts, but these breakouts failed and both are back in bear mode. The chart below shows the Energy SPDR (XLE) failing near its falling 200-day, breaking wedge support and falling off a cliff the last eight days. Energy and metals are not the place to be. 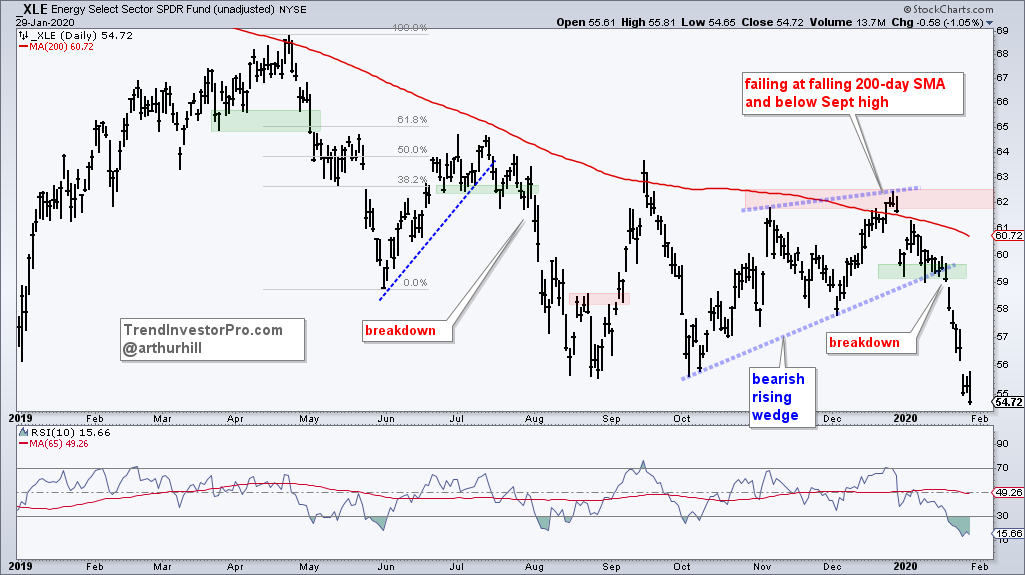