The principle of confirmation stems from classic Dow Theory, which used the Dow Industrials and Dow Transports to confirm price movements. The bull market was in good shape as long as both recorded higher highs by exceeding their prior peaks. A non-confirmation occurs when one of the Averages fails to confirm a new high in the other. Non-confirmations are not bearish, but they highlight a performance discrepancy that should be watched closely.

Instead of using the Dow Industrials and Dow Transports, I am going to apply the confirmation principle to the six biggest sectors in the S&P 500. Market tops and corrections are often preceded by performance divergences. Often, the S&P 500 will record a new high, but this new high will not be confirmed by some of the key sectors. This is not the case today as five of the six key sectors confirmed new highs in the S&P 500 this week. More details further down…

The S&P 500 SPDR (SPY) moved to a new high this week and extended its uptrend. After a harami and big decline in late January, SPY came roaring back with a 4.6% gain in February (9 days or the last two weekly candles). It is an extraordinary move that goes on top of an already extraordinary move. SPY was already up around 8% from October to January, not to mention up almost 29% in 2019.

With the bounce the last two weeks, SPY established a clear support level around 320. The ETF is still quite extended as the PPO(1,40,0) neared the 10% level for the second time in as many months. This means the close is almost 10% above the 40-week EMA. Note that the PPO was above 10% for three weeks in January 2018. Overextended is not reason enough to turn bearish, but it does increase the odds for a corrective period. Yeah, yeah, you have been saying that for a few weeks now. 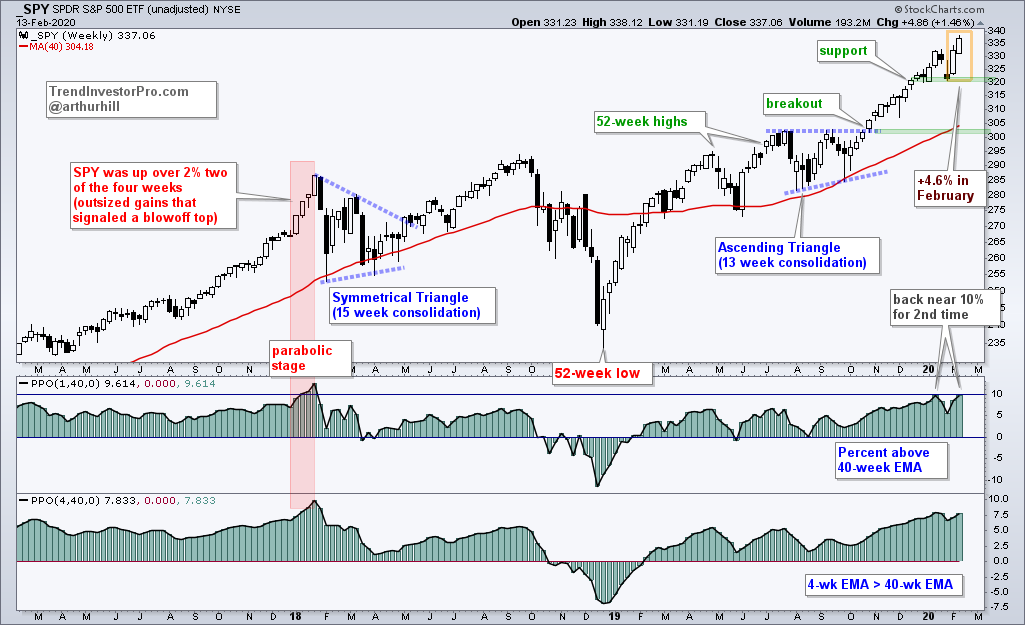 Timing the start of a correction is like picking a minor top and any kind of top picking exercise within a bull market is difficult. As far as I am concerned, we can either be early or late. The signs of excess in mid January and increase in volatility over the last five weeks provided the early signs for a correction. These early signs turned out wrong (for now) as stocks surged the last nine days. SPY established a clear support level at 320 with the February bounce and a break below this level would provide the late signal for a correction. 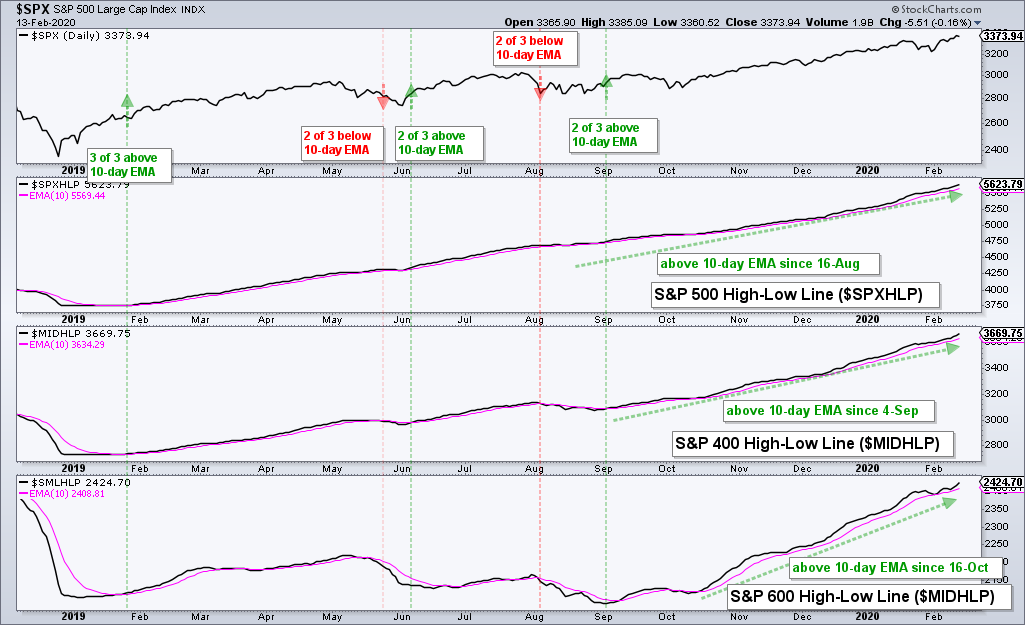 There is no change in the Sector Breadth Model with 29 of 33 indicators on active bullish signals and ten of eleven sectors net bullish. The six biggest sectors are net bullish (Technology, Finance, Healthcare, Consumer Discretionary, Communication Services and Industrials). Consumer Staples, Utilities and REITs are firmly bullish. The Materials sector has one bearish signal, but remains net bullish with two of three indicators still bullish. All three indicators in the Energy sector are on bearish signals and it is by far the weakest sector. Energy accounts for less than 4% of the S&P 500 right now and this is the lowest level in over 20 years. Given the strength in Utilities and weakness in Energy, these two could swap places at some point this year. 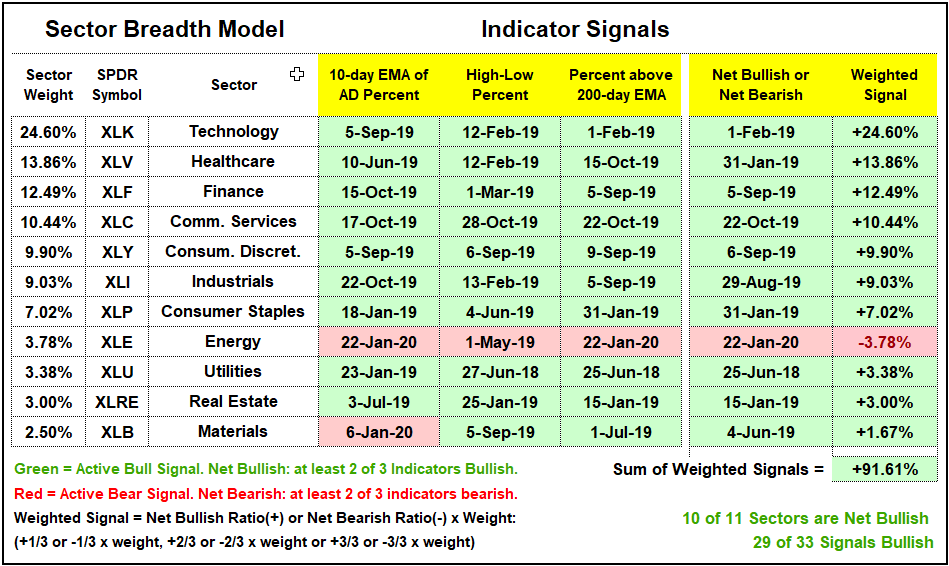 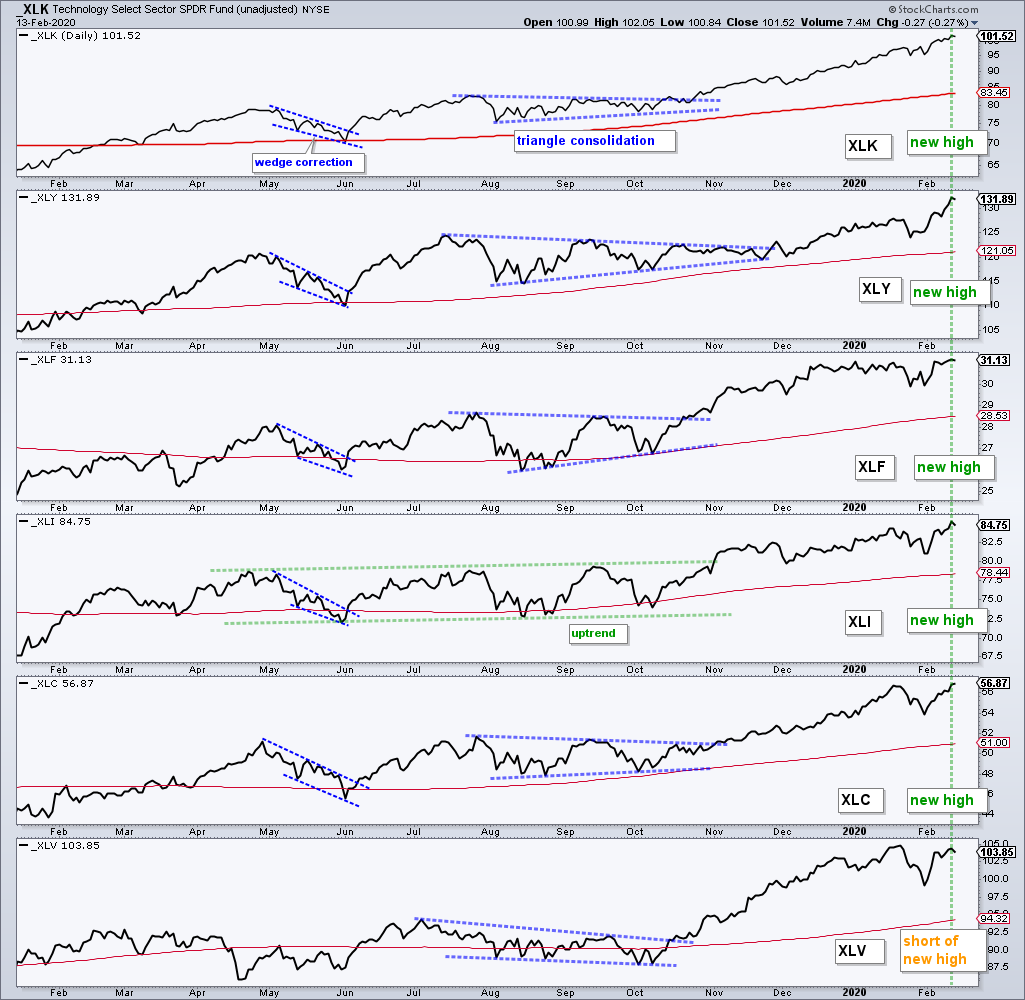 On the equal-weight side, there were new highs in the five of the six biggest sector ETFs. The EW Finance ETF (RYF), EW Technology ETF (RYT), EW Industrials ETF (RGI) and EW Healthcare ETF (RYH) hit new highs this week. The EW Consumer Discretionary ETF (RCD) remains short of a new high. Relative weakness in the Consumer Discretionary is a concern, but this concern is not that great because the other five hit new highs. 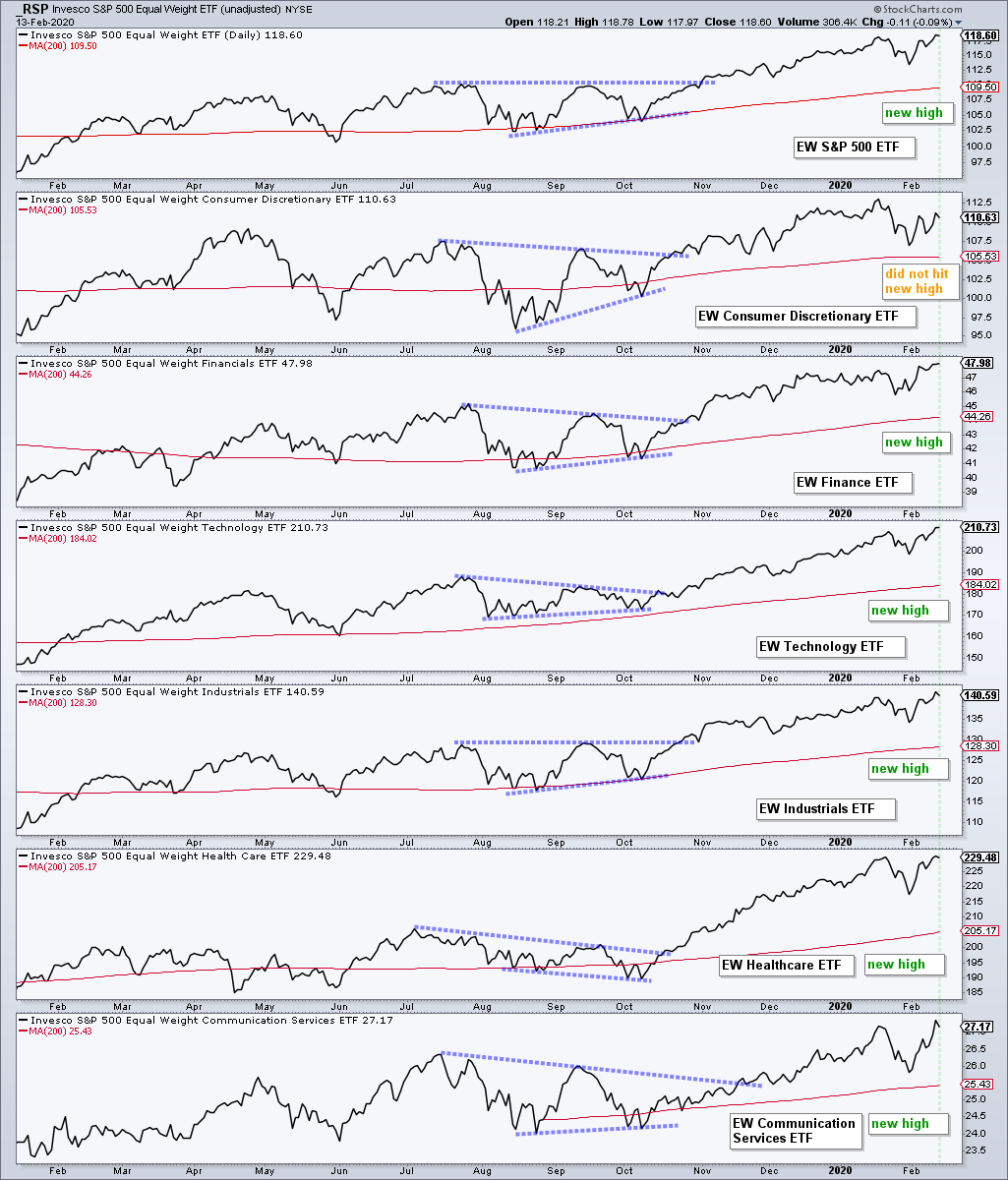 There were also new highs in the EW Consumer Staples ETF (RHS), EW REIT ETF (EWRE) and EW Utilities ETF (RYU). All told, eight of the eleven equal-weight sectors hit new highs and this shows broad strength throughout the S&P 500.

The six biggest sectors account for 80% of the market-cap weighting of the S&P 500 and 70% of the components (352 of 500). These are the sectors that truly drive the market. The High-Low Lines for the six biggest sectors are rising and hit new highs this week. Note that three of the six have been rising since mid February (Technology, Finance and Industrials). Consumer Discretionary turned up in early September to make it four of six. Healthcare and Communication Services joined in October. 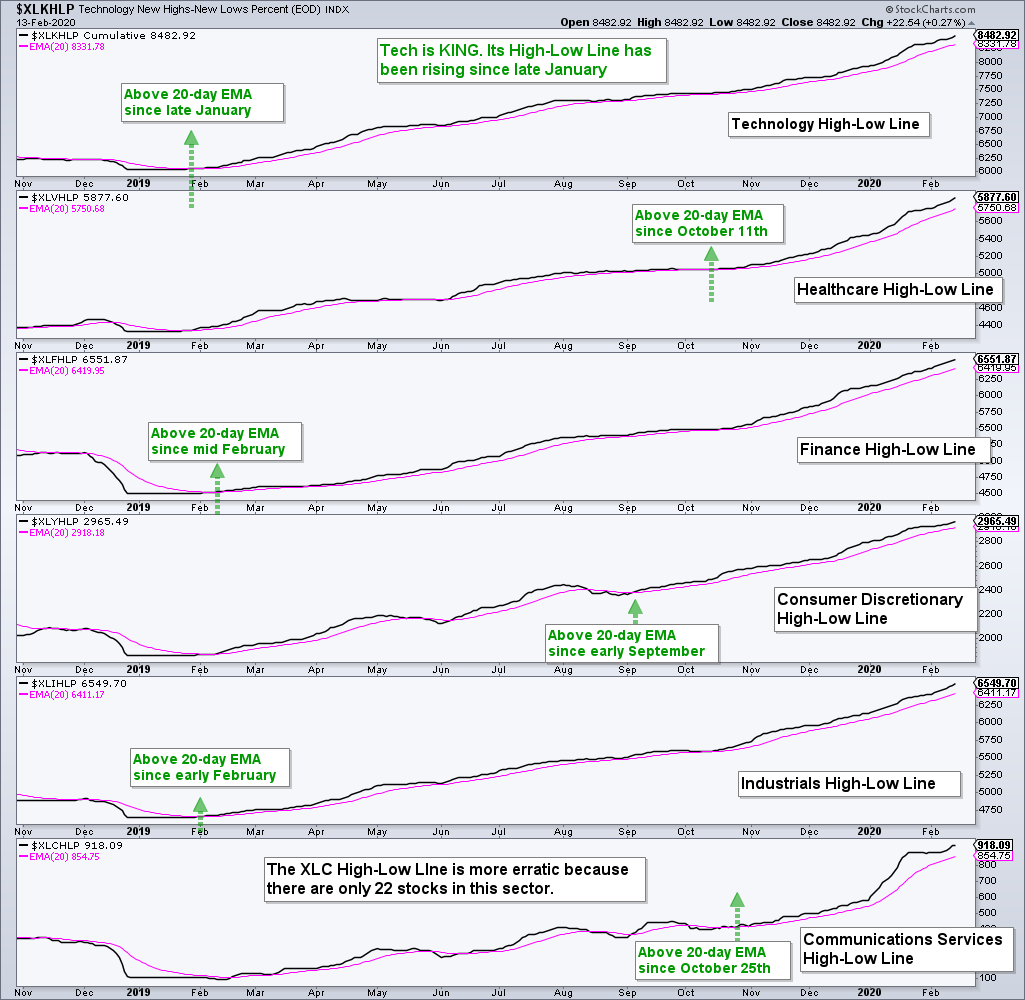 After a few weeks of sideways movement, the Fed’s balance sheet expanded over the last three weeks and total assets reached their highest level since September 2018. The System Open Market Account (SOMA) expanded for the sixth straight week and also hit a new high for the move, which began in mid September. Total Assets and SOMA are expanding and this supports the rise in stock prices (aka Don’t Fight the Fed). Links: Fed Balance Sheet and  System Open Market Account (SOMA). 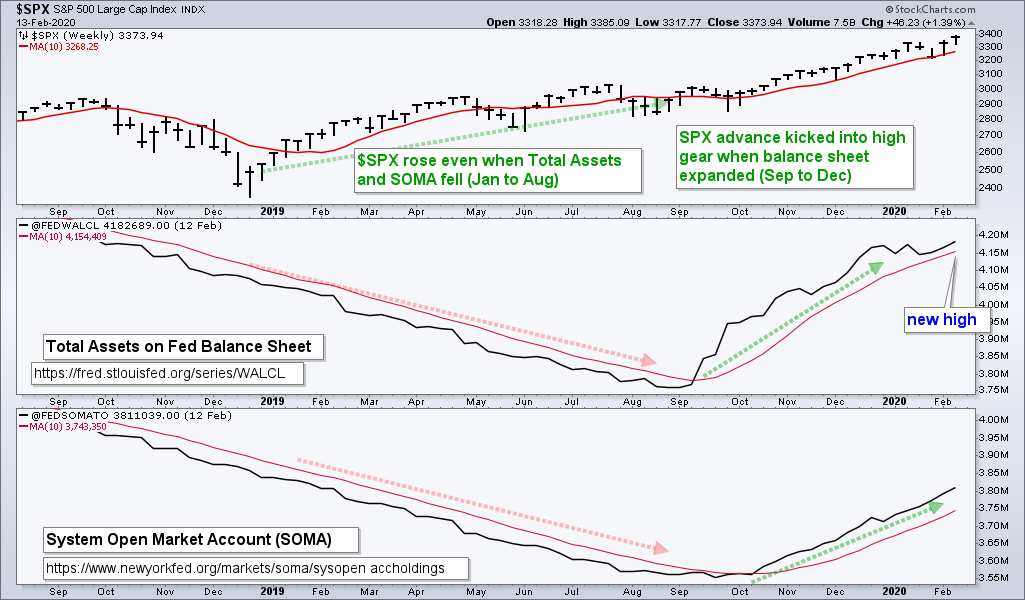 Several indicators pointed to a corrective period at the end of January, but price is the ultimate arbiter and price clearly rebounded in February. The gaps and flag/pennant breakouts in several key ETFs were featured in Thursday’s report. There are still signs of excess and we saw an increase in volatility the last five weeks. The risk-on ratios rebounded after big hits in January, but none of them exceeded their January highs. 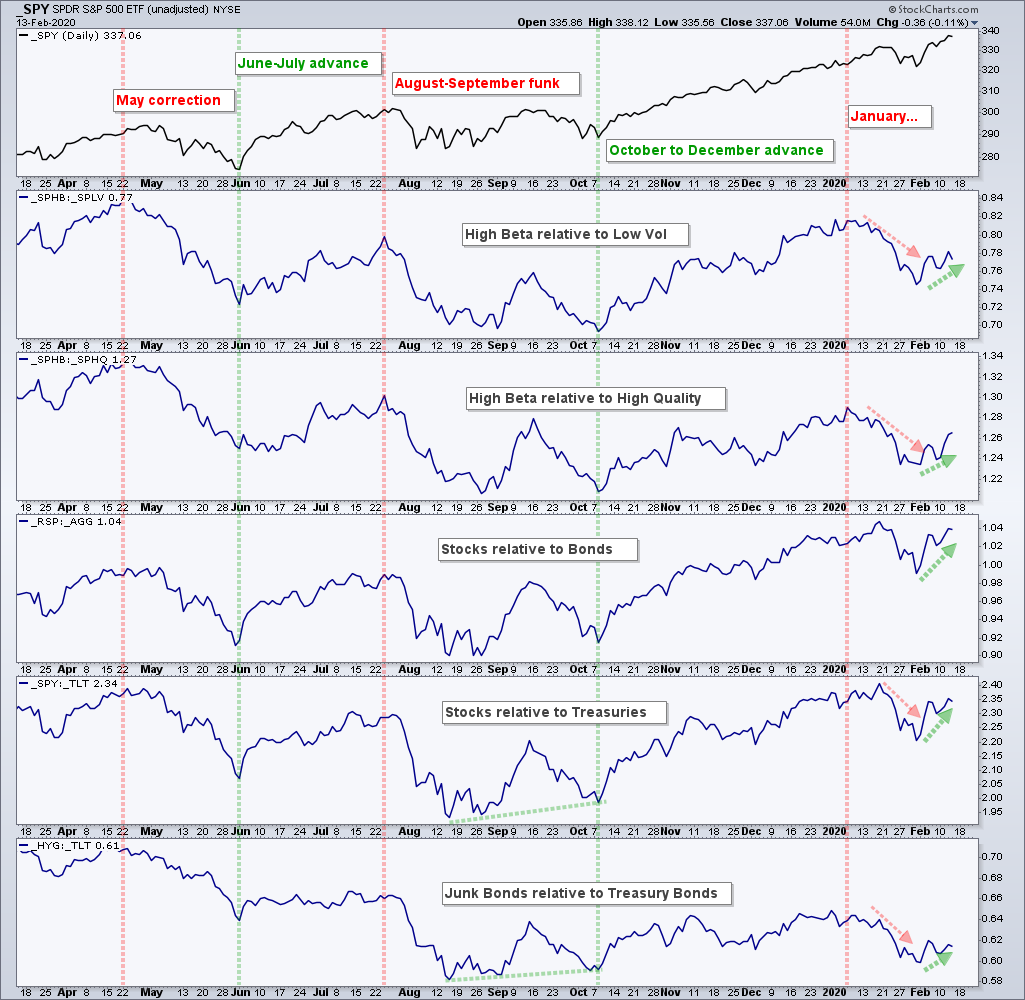 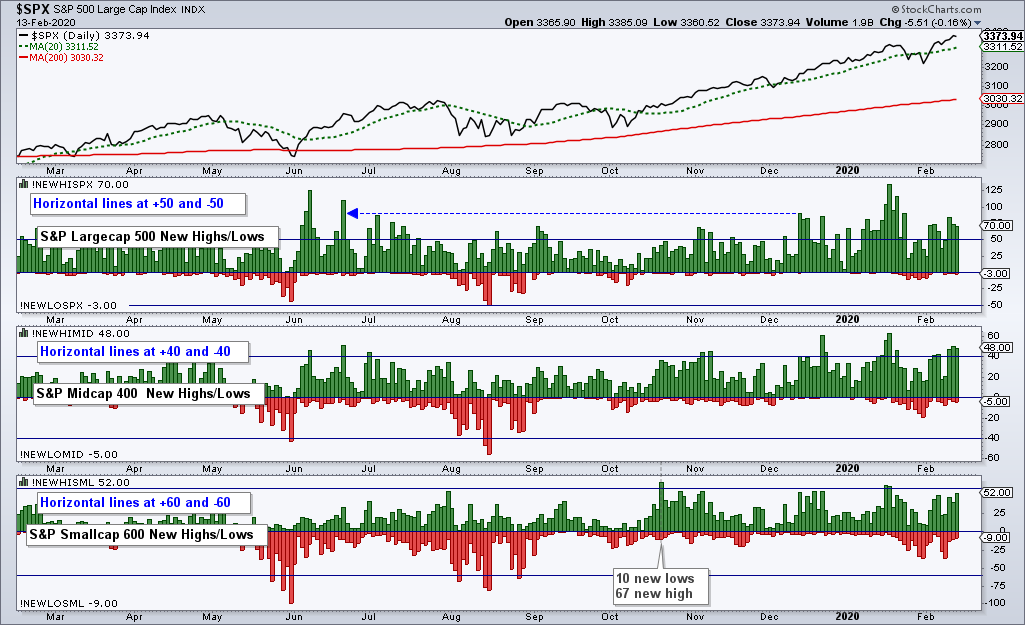