There are lots of new highs already this week and lots of flag breakouts. However, these new highs and fresh breakouts are still overshadowed by an overextended stock market (SPY). Yes, the odds of a corrective period remain high. The flag breakouts and gaps from early February are holding for now – and remain the first levels to watch for failures in some key ETFs (SPY, QQQ, XLK…)

Many of the hardest hit ETFs got big mean-reversion bounces the last eight days, but they have yet to clear their prior highs. This means they are showing relative weakness, relative to SPY and QQQ that is. In particular, small-caps (IMW) and mid-caps (MDY) are underperforming, as are regional banks (KRE) and retail (XRT).

I am also seeing continued strength in bonds, the bond proxies (XLU, XLRE) and the Consumer Staples SPDR (XLP). The Home Construction ETF (ITB) is also interest-rate sensitive and performing quite well here in 2020. Continued strength in the 20+ Yr Treasury Bond ETF (TLT), which is a safe-haven risk-off asset, has not affected SPY and QQQ, but I am watching closely. Also note that gold remains strong, even with the Dollar up 2.6% this year.

Some Summary Stats for the 60 Core ETFs

It is not every day that the Solar Energy ETF (TAN) is placed with the Mortgage Real Estate ETF (REM) and Preferred Stock ETF (PFF), but these three appear to be going ballistic in their own way. In the core ETF list (60), TAN sports the biggest gain since early December (+40%) and is the most above its 200-day SMA (30%). Clearly, TAN has gone ballistic. REM is up around 9% since December and 9.5% above its 200-day, while PFF is up around 4% since December and 2.6% above its 200-day.  These strong moves and new highs are bullish, but they are quite extended after relatively outsized gains the last 2-3 months. 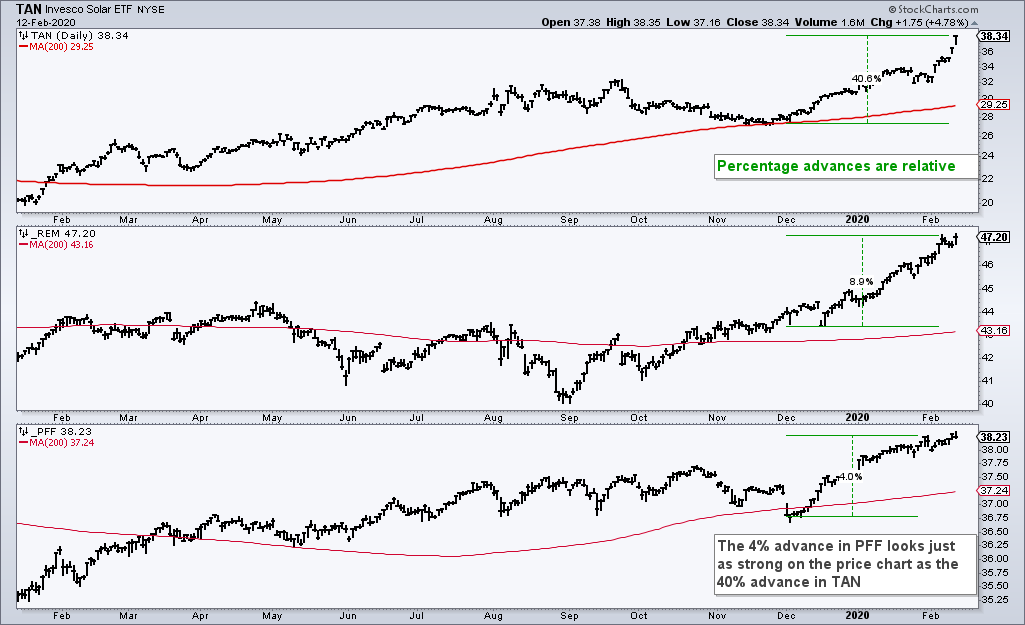 The list of ETFs with flag or pennant breakouts and new highs remains long. The contingent from tech-related ETFs is quite large with QQQ, XLK, XLC, SKYY, FINX, IPAY and IGV showing up. These gaps, breakouts and new highs are bullish, but they do not change the medium-term situation for the broader market. Namely, SPY is up 17% since October 2nd and 11.6% above its rising 200-day SMA. SPY has also been above its 50-day SMA for 85 days, which is the longest streak since January 2018 and the 4th longest streak since 2009 (more on this in tomorrow’s report). In short, this advance remains extended and vulnerable to a correction. 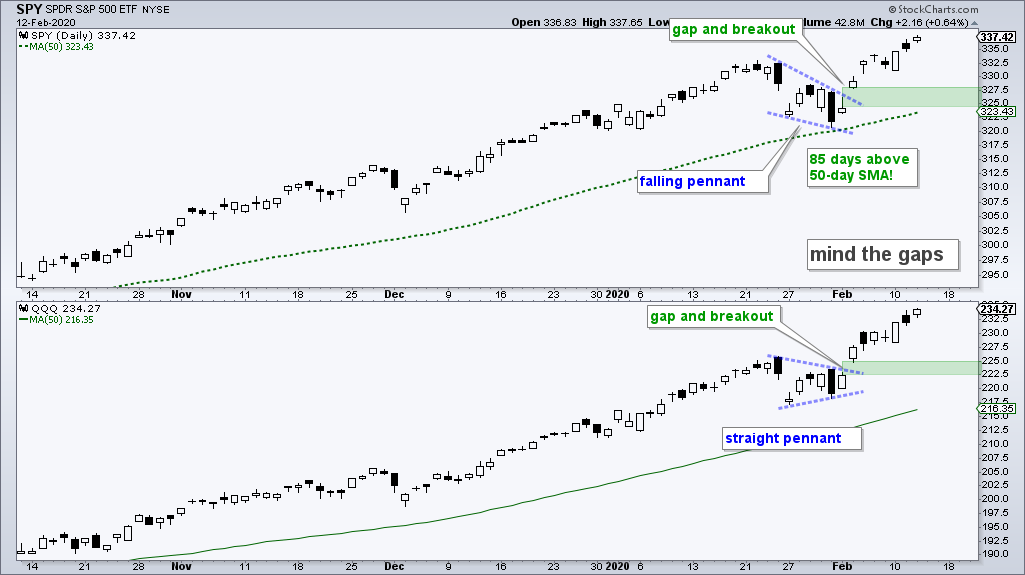 As noted over the last few months, flag and pennant breakouts can be tricky. Keep in mind that they are short-term patterns and do not affect the longer trend. As short-term patterns, they require regular attention and it is often practical to employ profit targets are very tight trailing stops (Chandelier (22,1)). We saw flags fail with the Regional Bank ETF in early December and Russell 2000 ETF in late January. Therefpore, it is vitally important to put your trading plan into place before making the trade and carry out that plan when the trade is active.

The next chart shows an array of flags and pennants for the Technology SPDR (XLK), Industrials SPDR (XLI), Software ETF (IGV) and Cloud Computing ETF (SKYY). First, notice that XLI was the only one to dip below its 50-day SMA last week. Thus, it is not as strong as the other three. XLI gapped up and broke its flag on 5-Feb, while the other three gapped up and broke out a day earlier (4-Feb). The green shading marks the breakout-gap zone and this is the first area to watch for a failure. These breakouts are holding and the correction for the broader market is on hold. Failure to hold the breakout in these key groups would add to the argument that the market is entering a corrective phase. 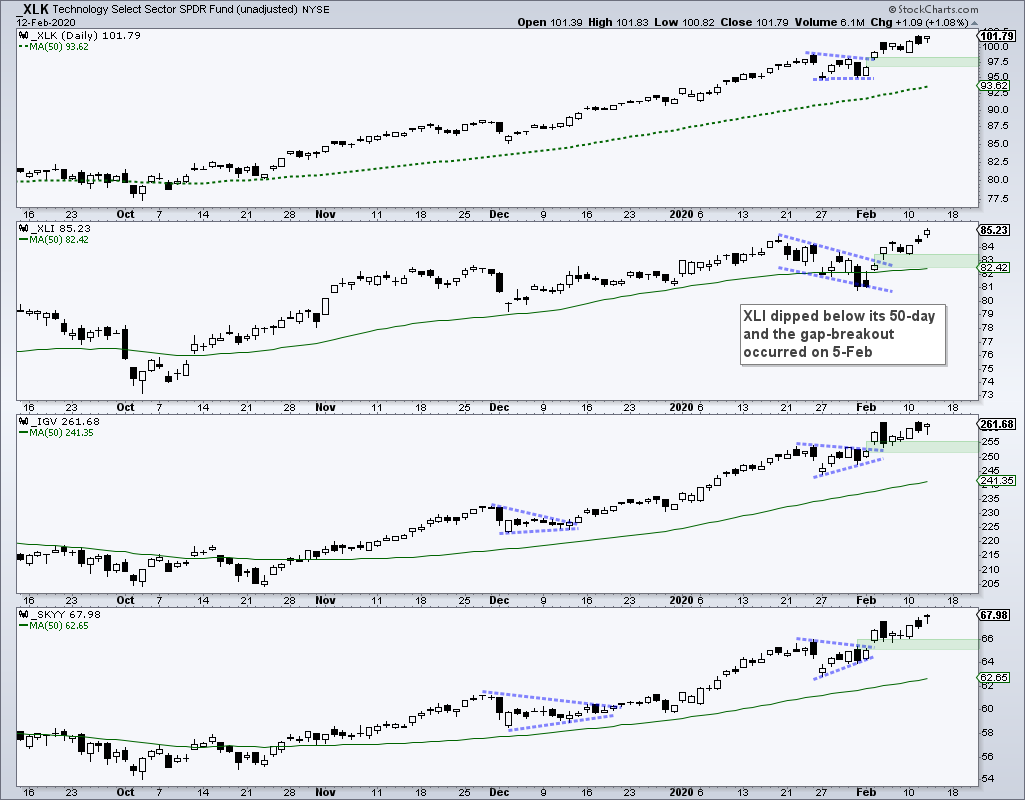 New highs and big moves in Amazon and Home Depot powered the Consumer Discretionary SPDR (XLY) to new highs here in February. The chart shows XLY breaking out in late December, successfully testing the breakout zone with a throwback in late January and surging to new highs in February. XLY is back on the leaderboard, but mostly because of two stocks (AMZN and HD). 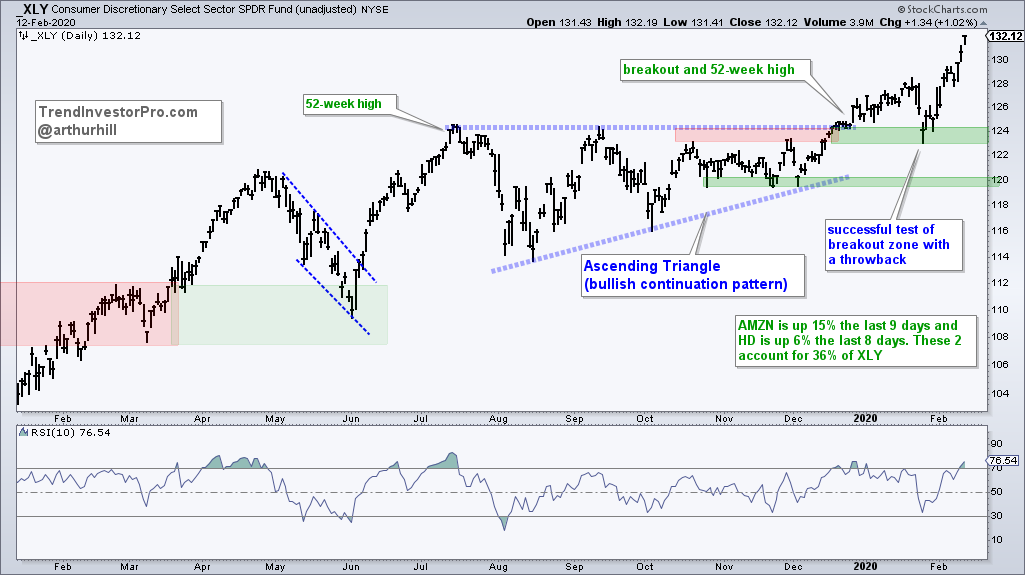 The Real Estate SPDR (XLRE) extended on its late December breakout with 5% surge the last eight days. Notice how XLRE fell back towards the breakout zone in early February and RSI(10) moved into the 40-50 zone to become mildly oversold. The pullback alleviated short-term overbought conditions from late January and provided the pause that refreshes. XLRE may not be leading in percentage terms, but the structure of its price chart is clearly bullish and an ETF with a new high is leading. 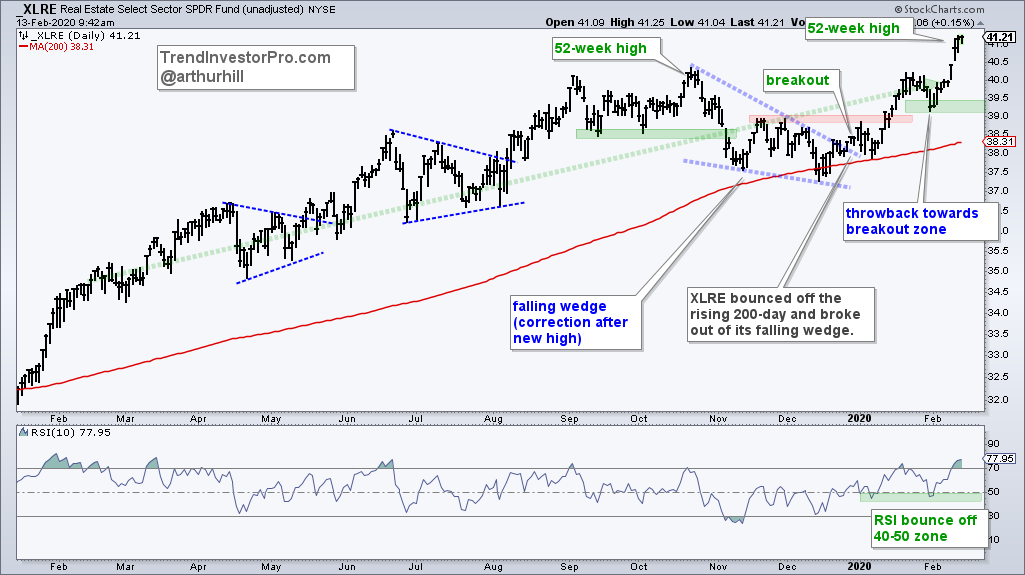 Now we get to the ETFs that got mean-reversion bounces the last eight days and recorded new highs. It is a motley crew with the Finance SPDR (XLF), Internet ETF (FDN) and Healthcare Providers ETF (IHF). The chart for XLF provides another example of a support break that led to a bullish mean-reversion setup. This happens all the time because one trader’s support break (bearish signal) is another’s oversold condition (mean-reversion setup). Overall, I am not that impressed with XLF, even though it hit a new high. It is up less than 1% since mid December and the least strong of the ten sector SPDRs that are up during this period. XLE is down some 10% since mid December. The Bank SPDR (KBE) and Regional Bank ETF (KRE) are seriously lagging since mid December and sporting losses. 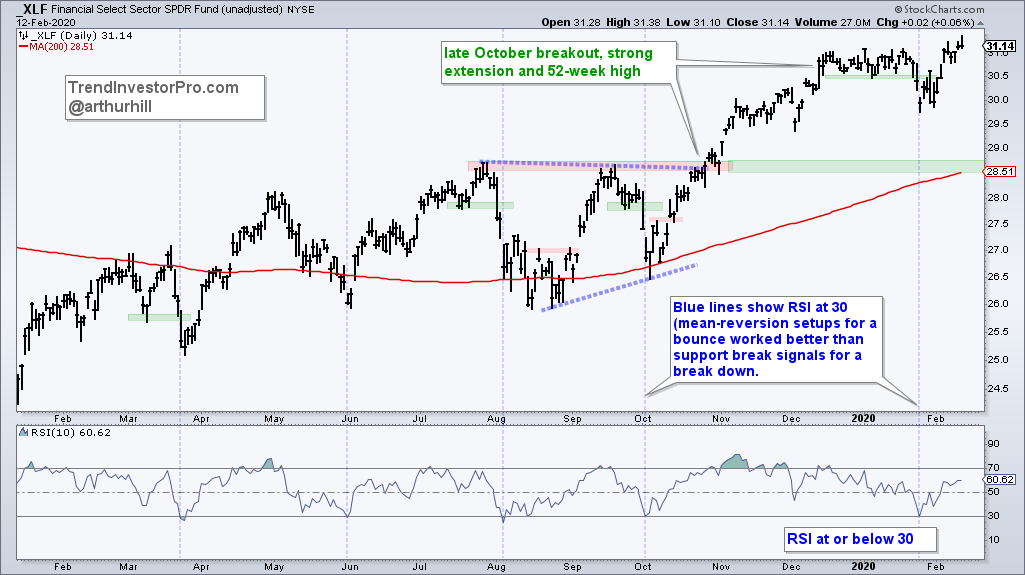 The Semiconductor ETF (SOXX) did not record a new intraday high, but did record a new closing high. It is also one of the leading ETFs over the last eight days with a 9.5% gain. SOXX fell 8% the prior six days and has gone nowhere the last 15 days. However, the deep dip and sharp advance over the last few weeks show an increase in volatility and this argues for caution. 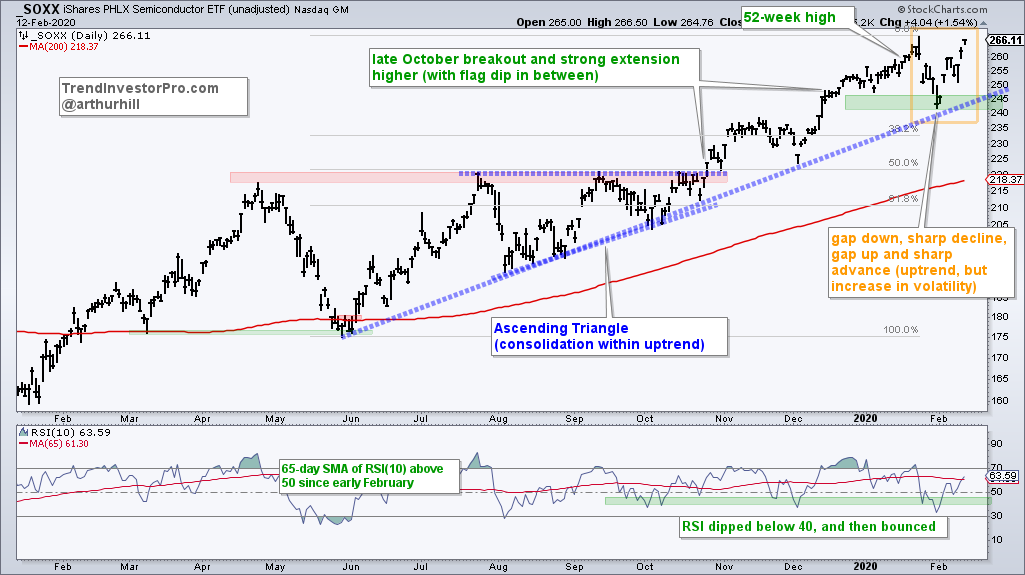 The five ETFs in steady uptrends hit new highs this week to extend their uptrends. XLRE and IYR could also fit in this group. The Home Construction ETF (ITB) broke out in mid January, fell back with a three day decline in late January and surged to new highs the last eight days. ITB is now up around 12% from its early January lows and sports one of the biggest year-to-date gains. The long-term trend is clearly up, but the ETF is getting a bit extended short-term. 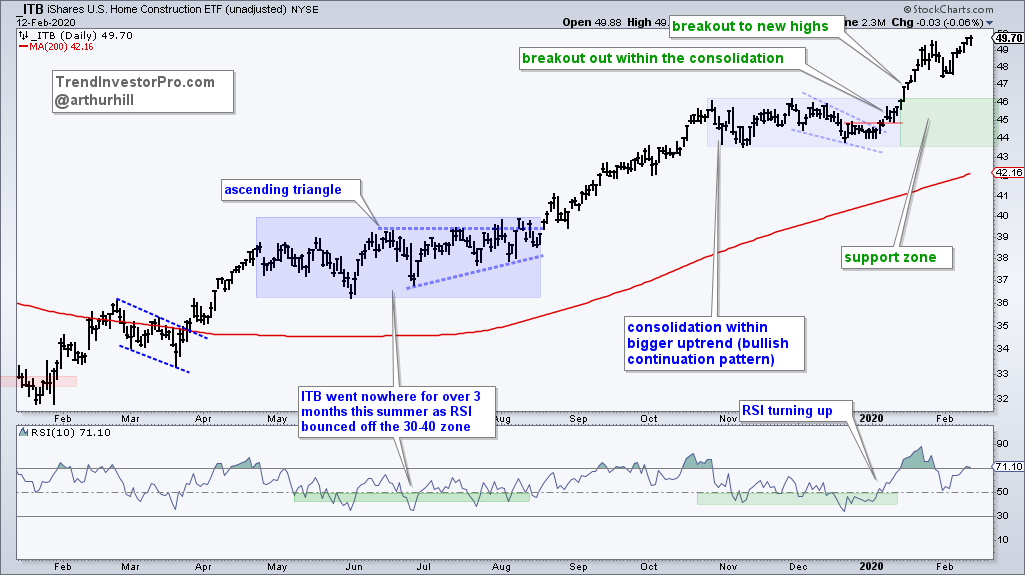 The Insurance ETF (KIE) caught fire with a 5.5% advance the last 12 days. Looking at the structure of the advance since March, we can see that this ETF likes to consolidate, breakout, hit new high and repeat. The consolidation occurred in January, the breakout was last week and the new highs were this week. Another consolidation period could be on the horizon here. 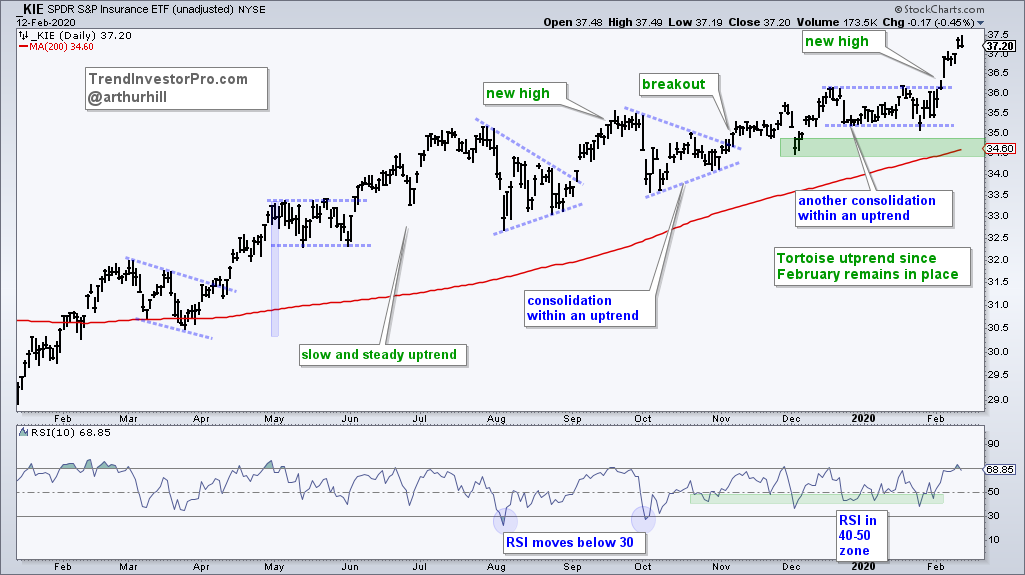 The Utilities SPDR (XLU) and Medical Devices ETF (IHI) have flag/pennant breakouts working, but they have yet to extend on these breakouts. XLU surged some 8% and then formed a tight pennant the last six to eight days. This amounts to a small correction that worked off the overbought condition, somewhat. XLU is making a bid to break out of this pennant and continue higher. IHI fell back with a falling flag in late January and broke out with a gap on 4-Feb. This gap-breakout is largely holding with the green zone marking support in the 267-270 area. A close below 267 would negate the flag breakout. 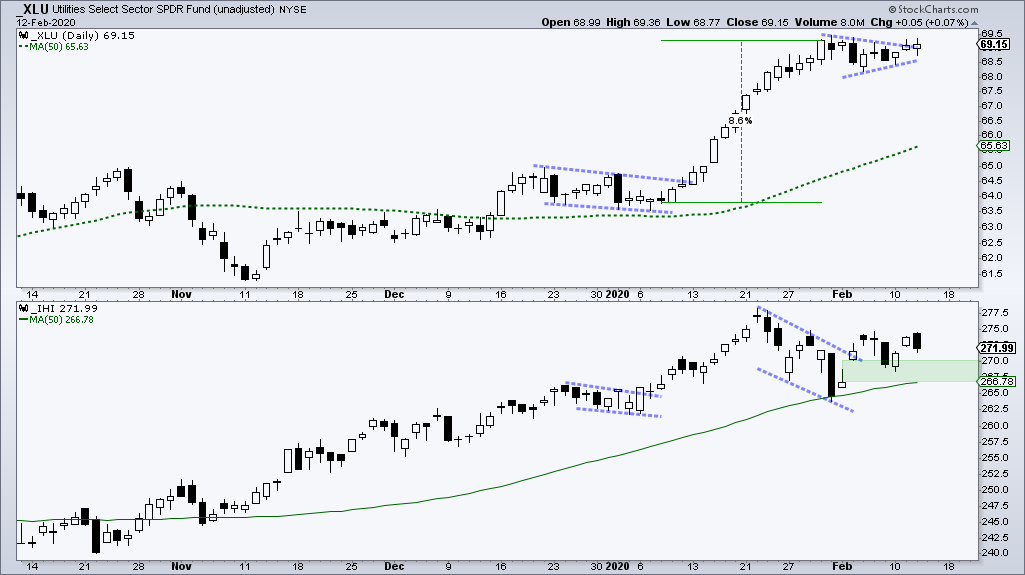 The bond ETFs and gold remain on the same page: bullish both long-term and short-term. The 20+ Yr Treasury Bond ETF (TLT) and Gold SPDR (GLD) surged to new highs in September, fell back with falling wedges into December-January and broke out with surges in late December (GLD) and mid January (TLT). They both fell back early last week with “normal” pullbacks and bounced last Friday. These normal pullbacks produced mild oversold readings as RSI(10) dipped to the 40-50 area. These pullbacks also alleviated short-term overbought conditions to pave the way for further gains. 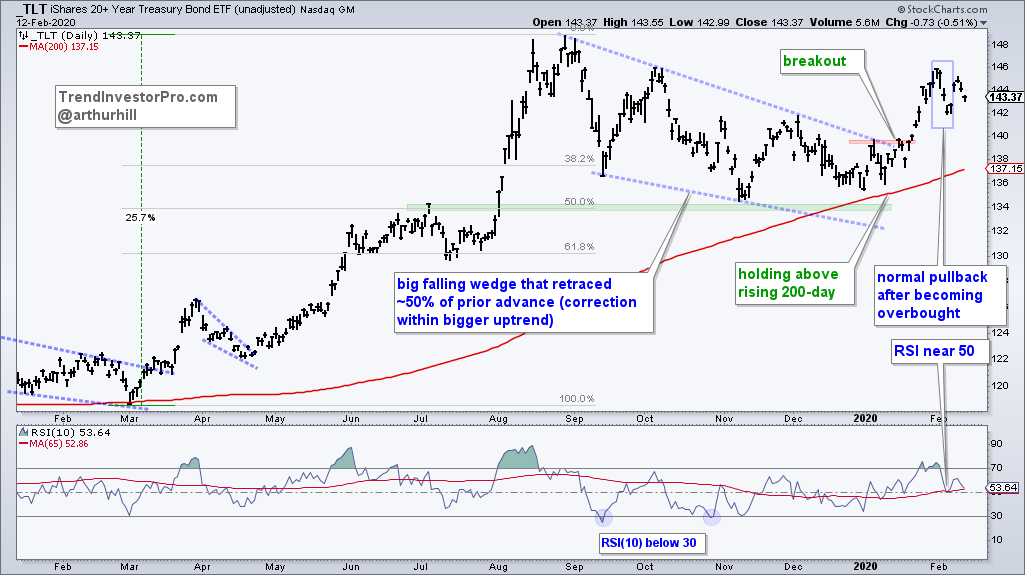 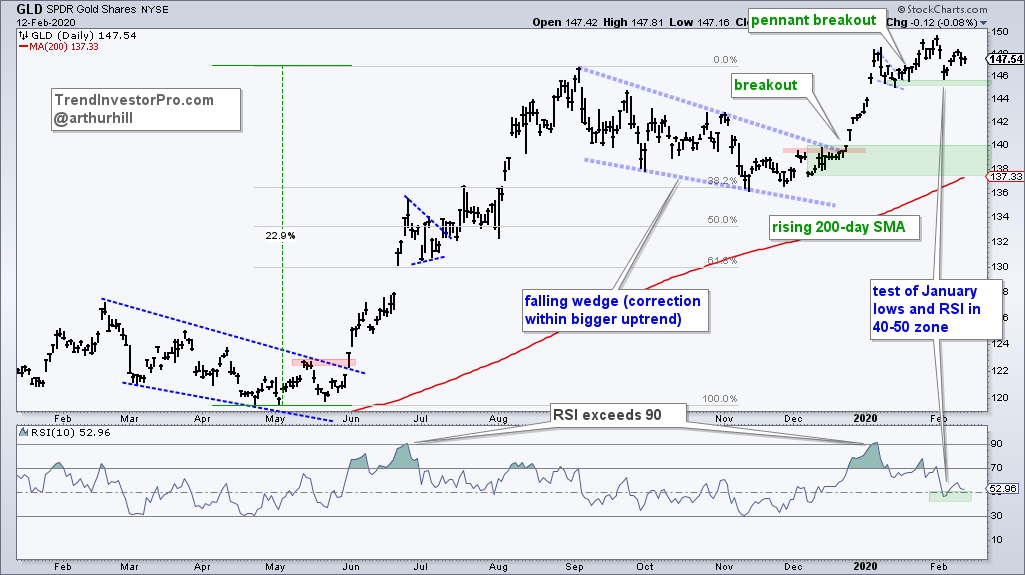 Mean-Reversion Bounce and below January High

Now we get to some of the laggards. The ETFs in this group got oversold bounces, but have yet to exceed their December-January highs. The Biotech SPDR (XBI) and Biotech ETF (IBB) are quite close, while the Regional Bank ETF (KRE) and Bank SPDR (KBE) are quite far. Thus, IBB and XBI are stronger than KRE and KBE. The S&P MidCap 400 SPDR (MDY) and Russell 2000 ETF (IWM) are also in this group because they are still short of their January highs.

IWM, which sports two failed pennants and one successful the last eight months, turned quite volatile the last four weeks with a pennant breakout, new high, support break (-5.5%) and mean-reversion bounce (+4.6%). This mean-reversion bounce is impressive and the long-term trend is up, but there is NO setup right now. IWM is in no-man’s land. In addition, the increase in volatility over the last four weeks argues for caution. 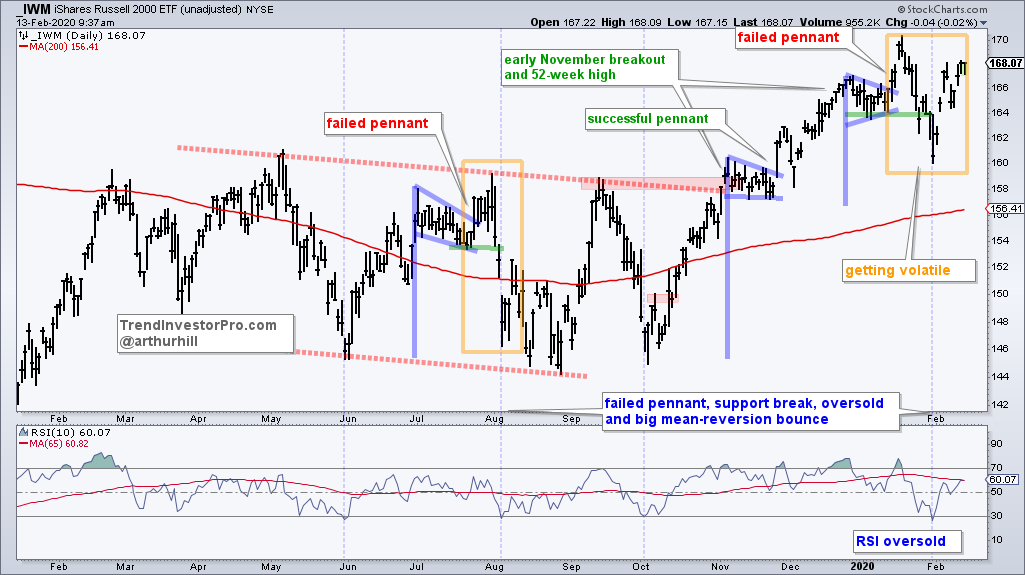 IBB is no stranger to volatility as the ETF fell around 7% in late January and then surged around 6% the last eight days. This puts IBB back near the late December highs. IBB is above its rising 200-day and in a long-term uptrend, but also in no-man’s land after this big mean-reversion bounce. 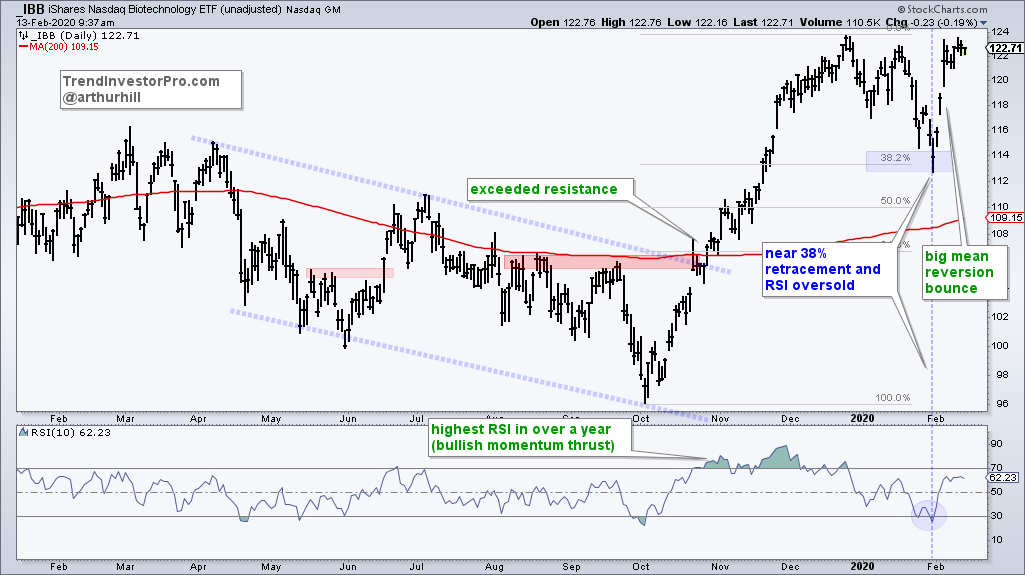 The Regional Bank ETF (KRE) had one of the weaker mean-reversion bounces and is a laggard overall. The advance lasted four days and added 5%, but the ETF fell back the next two days and remains below last week’s high after this week’s bounce. KRE was a laggard and remains a laggard because it peaked in mid December and formed lower highs the last eight weeks (as did KBE). Relative and absolute weakness in these two is why I cannot get excited about the Finance sector right now. 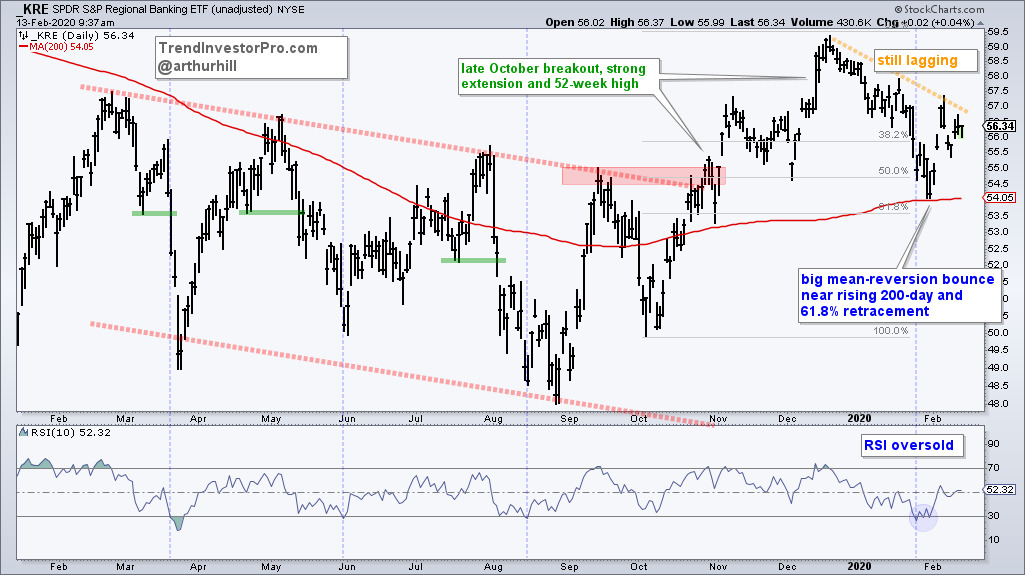 Near Support and Mildly Oversold

The Gold Miners ETF (GDX) gets is very own group because it does not fit the others. The ETF broke out with a surge in late December, but did not extend higher and instead consolidated. Broken resistance turns into support and a triangle could be taking shape. Also notice that RSI(10) is toying with the 40-50 zone. This is an area to watch for a bounce. A breakout within the triangle (above 28.7) would provide the first signal. 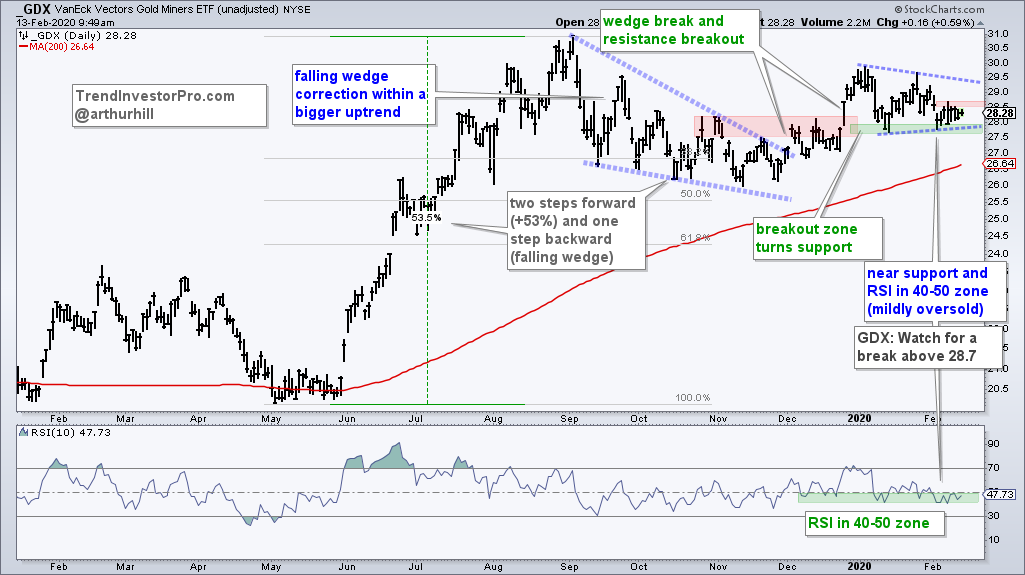 The High-Yield Bond ETF (HYG) is not as volatile in percentage terms, but volatility is relative and the chart shows a volatile period the last eight weeks. HYG fell around 1.5% in six days at the end of January and then bounced with a 1.5% move the last seven. Even though this will not show up on a Rate-of-Change screen for a basket of ETFs, these moves are out of character for HYG and show an increase in volatility. Nevertheless, the overall trend is up and HYG held its rising 200-day SMA. I will stay long-term bullish as long as the recent lows hold (on a closing basis). 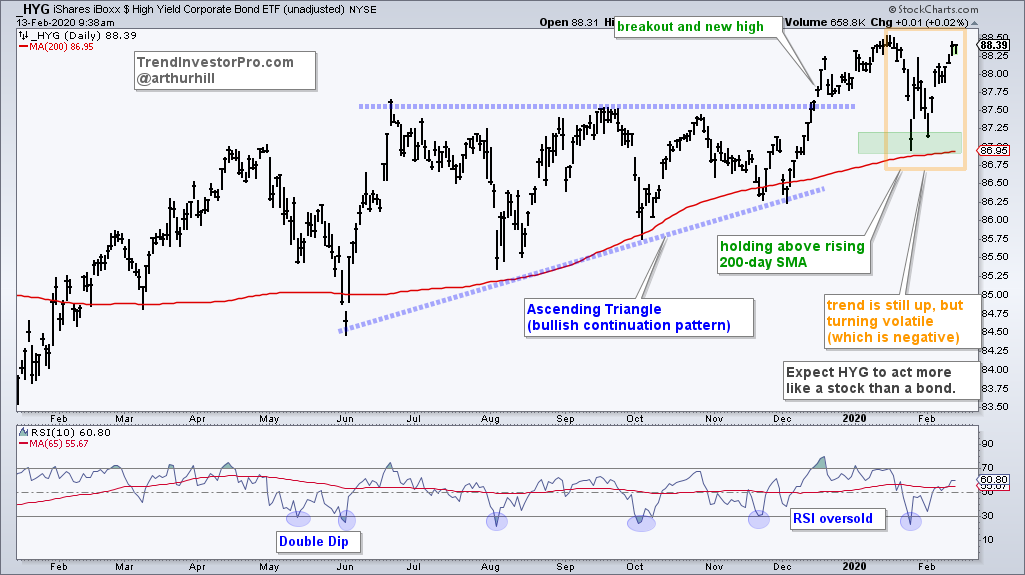 There are eight ETFs classified in downtrends. Among other things, they are below their falling 200-day SMAs and all but two recorded new lows this year. XME and AMLP are the exceptions. The chart below shows the Oil & Gas Equipment & Services ETF (XES) hitting a new low in late January and testing this low last week. Forget about watching this test or the fact that RSI held above 30. XES is in a long-term downtrend and this is the dominant force at work. Furthermore, Energy is by far the weakest sector in the market right now. 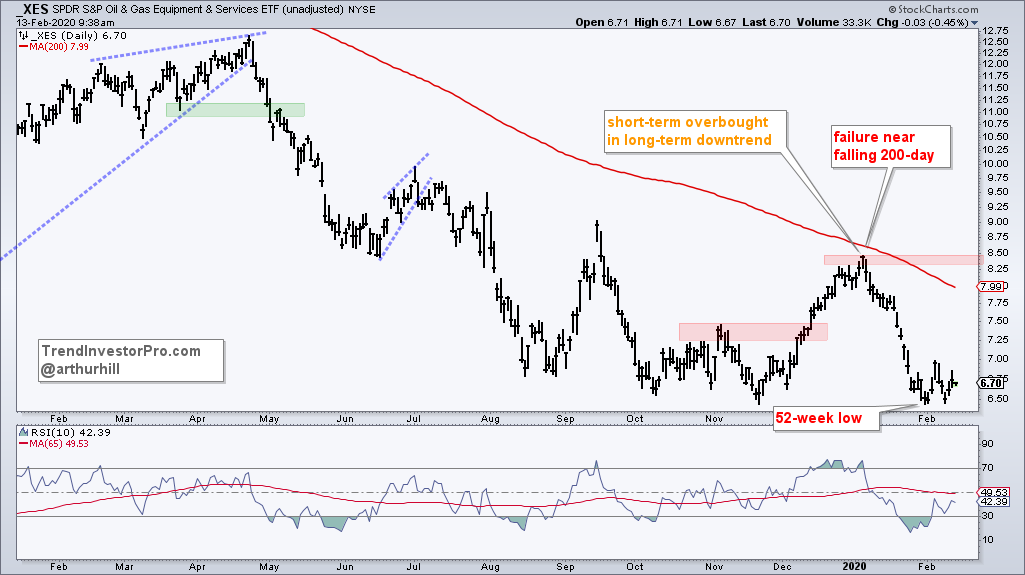