Banks are still lagging as the Regional Bank ETF and Bank SPDR remain in short-term correction patterns, and the Finance SPDR remains stuck in a consolidation. Perhaps this has something to do with renewed strength in the 20+ Yr Treasury Bond ETF, which broke out this week. This means Treasury yields fell. Strength in bonds helped bond proxies as the Utilities SPDR broke to new highs and the Real Estate SPDR extended on its wedge breakout.

There is plenty of strength within the core ETF list as more than 30 of the 60 ETFs recorded 52-week highs over the past week. Trading the long side of the market has been like shooting fish in a barrel since October. This three plus month run has been extraordinary with 21 of the 60 ETFs advancing more than 10% since early October. The run is not over, but we should be careful heading into the second half of January.

Note that I published a detailed article and video on the Weighted Average Stochastic Score (WASS) on Wednesday and the ranking tables are based on this score. The article showed how the indicators work, the methodology behind the weighted score and the results from a rotational strategy.

Using only closing prices, I am able to filter erratic spikes in the intraday high or low (see August 2015 for an extreme example). Close-only indicators are also immune to intraday volatility and the close is the most important price point of the day. Even though smoothing with a 20-day SMA introduces some lag, it stabilizes the rankings and reduces whipsaws when trying to follow a rotational strategy.

Note that a rotational strategy based on an indicator rank is COMPLETELY different from a strategy based on chart patterns. There are no patterns when ranks are concerned and ranks are less meaningful when looking at patterns. XLRE ranks 57 out of 60 with a WASS of 43. However, the price chart looks bullish with a falling wedge breakout. Also note that WASS moved from 35 to 43 over the last 5 days (+9) and this is one of the bigger improvements.

ETFs in the first group are the strongest with new highs and strong extensions the last few weeks. The Nasdaq 100 ETF (QQQ), Technology SPDR (XLK) and a few tech-related ETFs are running away with the show. Note that QQQ and XLK are up around 20% since early October and up over 3.5% year-to-date. These are strong moves over the last three months and three weeks.

At this point, we are simply in the trend-monitoring phase of the advance. The big breakouts, short consolidations and short pullbacks are long gone and we are in the midst of a strong advance. RSI(10) for QQQ has been above 70 for 20 of the last 21 days. We saw a similar stretch in April when RSI held above 70 for 19 days. This is not bearish, but it reflects an advance that is seriously long in tooth and ripe for a rest. 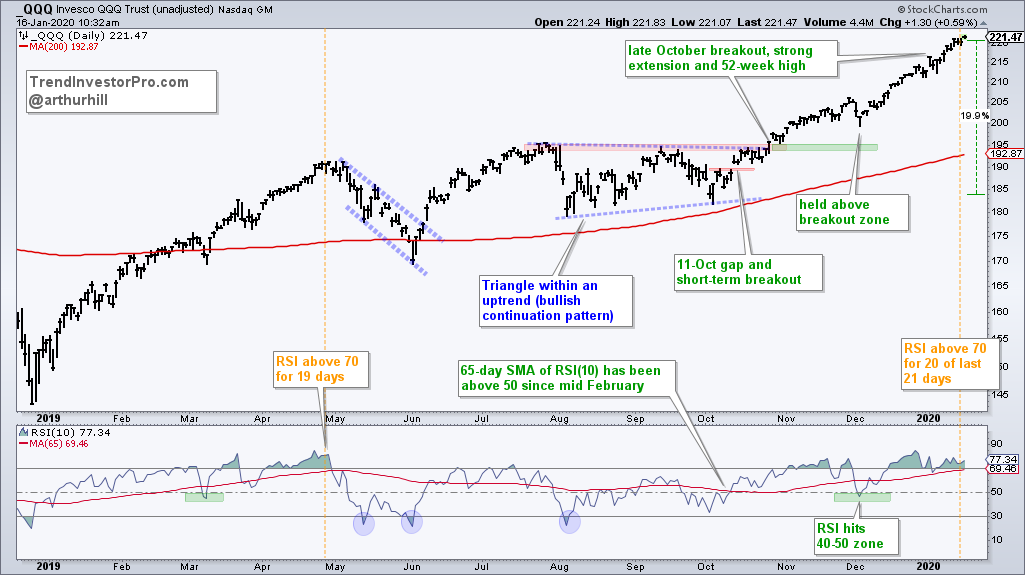 ETFs in the second group are by no means weak. They are just not quite as strong as ETFs in group 1. Yes, I am splitting hairs trying to differentiate these two groups.

The S&P 500 Momentum ETF (MTUM) and S&P 500 Minimum Volatility ETF (USMV) caught fire the last six days with 3% and 2% advances, respectively. Momentum is catching fire finally and we are also seeing strength on the defensive side of the market (Staples, REITs and Utilities). Strength in the latter three is not bearish for the market because they can rise during bull markets too. 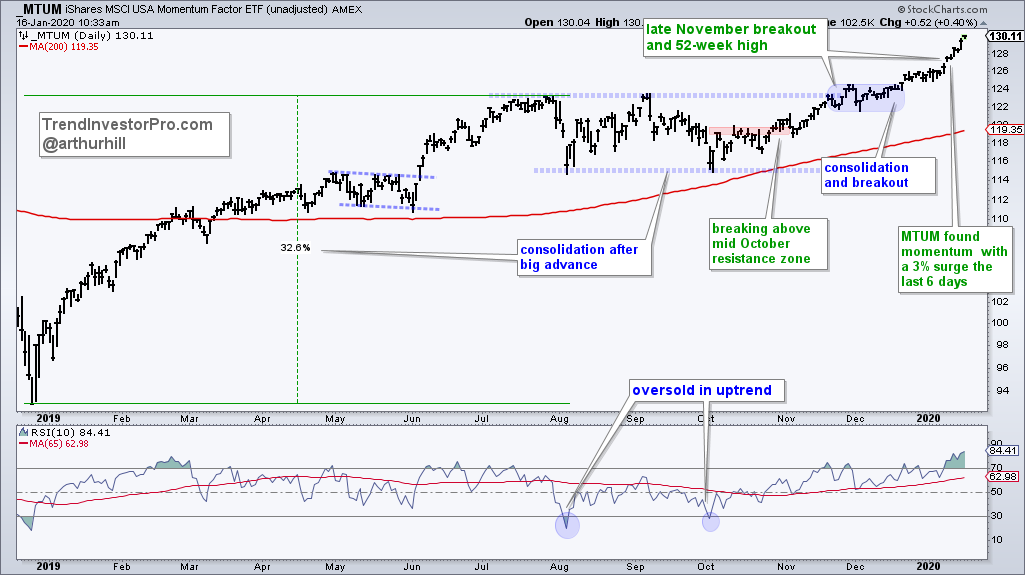 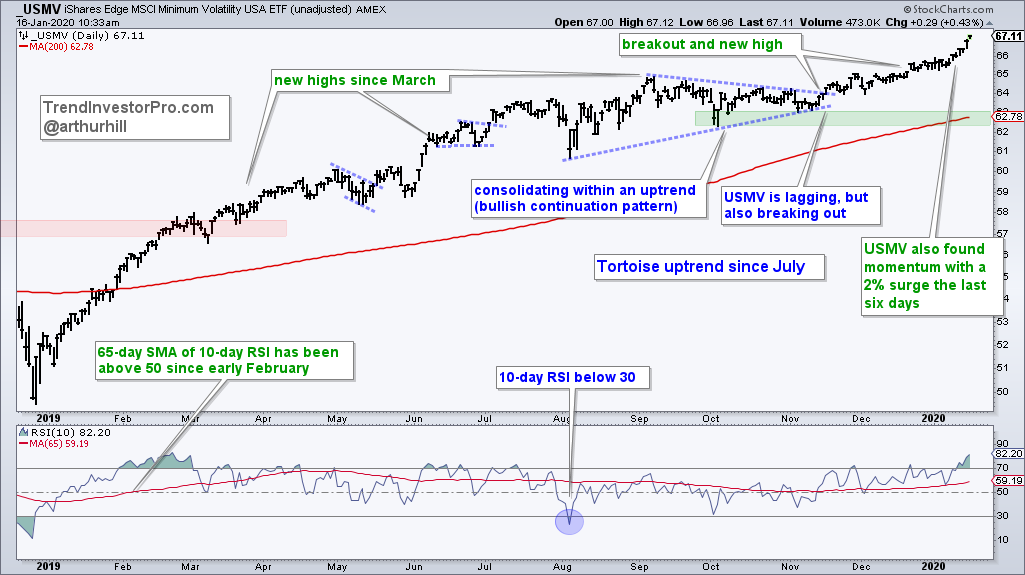 The FinTech ETF (FINX) and Mobile Payments ETF (IPAY) hit new highs as they extended on their falling wedge breakouts from mid November. The big breakouts occurred in late October for QQQ and XLK, and mid November for IPAY and FINX. There were short pullbacks in early December and RSI dipped into the 40-50 zone for IPAY and FINX. The pennant breakouts on December 12th were the last signals and both remain in the trend monitoring phase right now. This means I am simply waiting for the next setup to materialize. 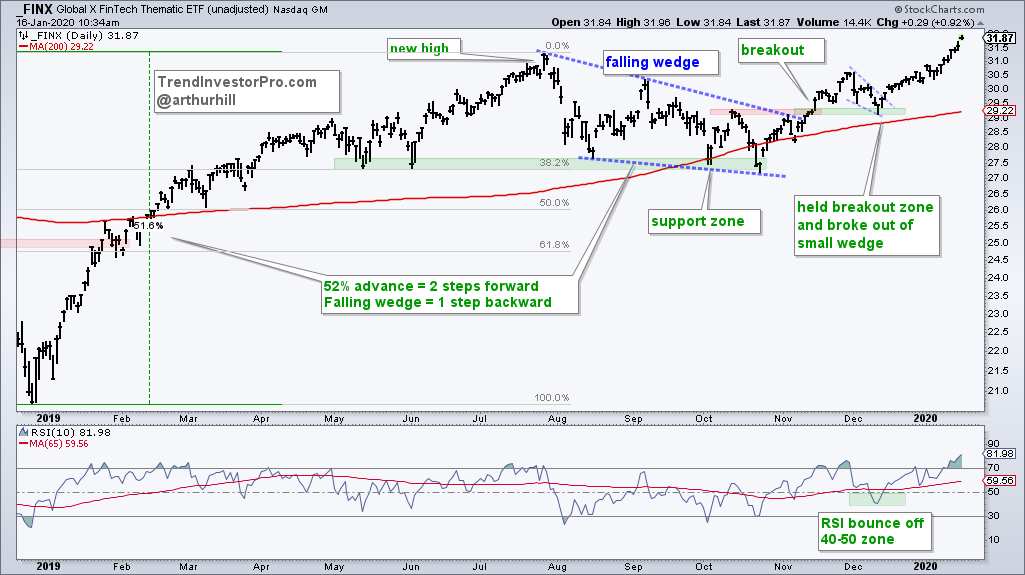 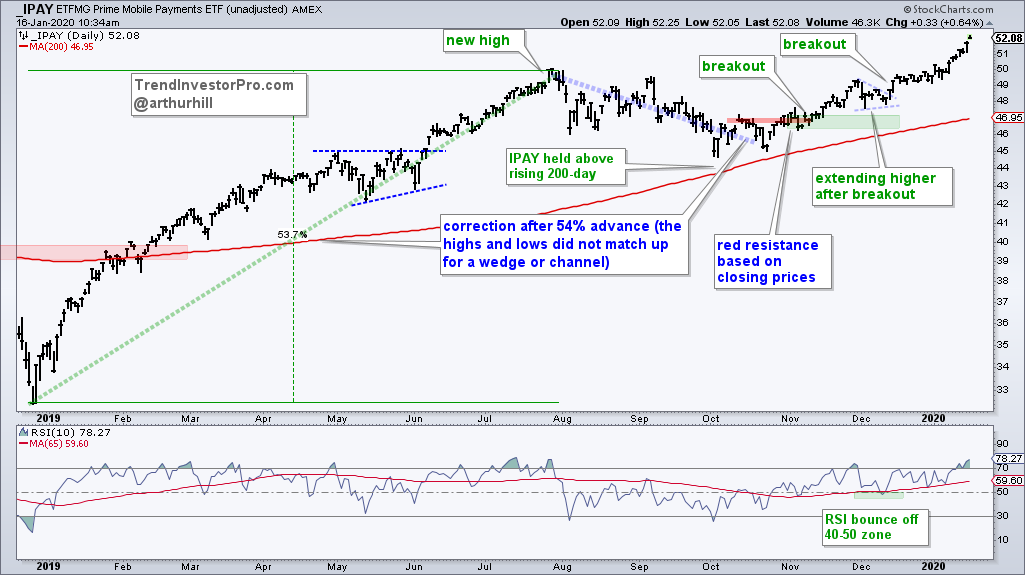 There were a number of consolidation breakouts over the last two weeks. We are talking falling flags, flat flags, small falling wedges and pennants of some sort. The Healthcare SPDR (XLV) and Consumer Staples SPDR (XLP) both hit new highs in late December, pulled back into early January and surged the last six to eight days. Even though the rate-of-change was wildly different from October to December, the falling flag/wedge patterns represented similar configurations: short-term bullish continuation patterns. 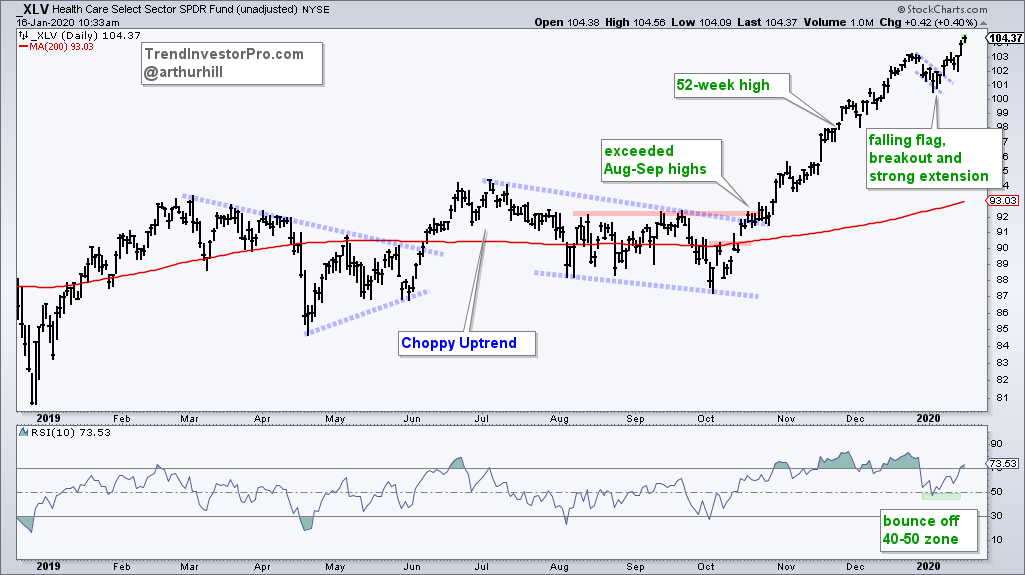 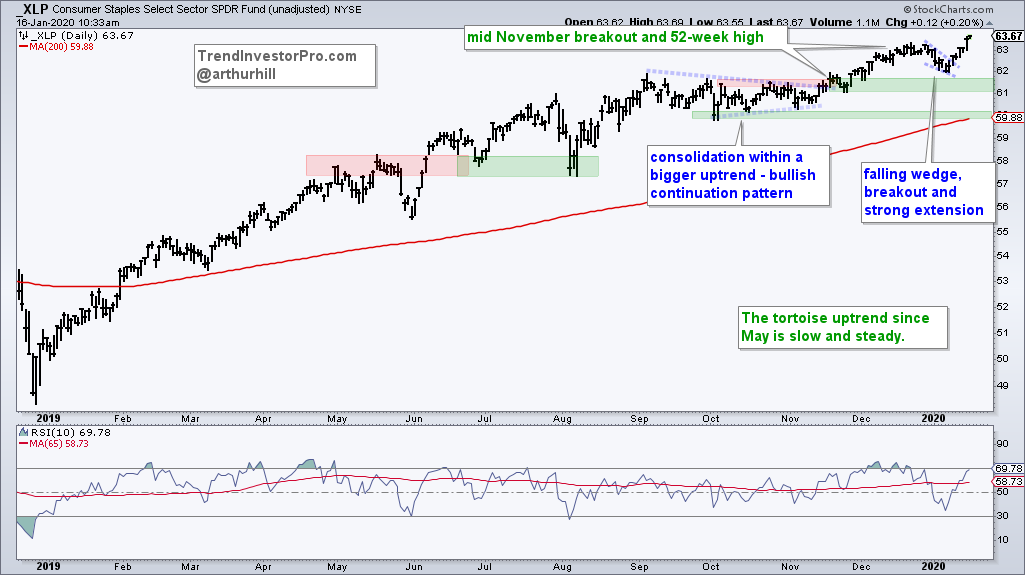 The biotech ETFs serve to remind us that short falling flags can be tricky because we sometimes see a hard throwback after the breakout. The Biotech SPDR (XBI) broke out with a strong advance last week, but fell back below 93 on Monday. Just when it looked as if the flag breakout was failing, the ETF surged back above 96 to keep the flag breakout alive. 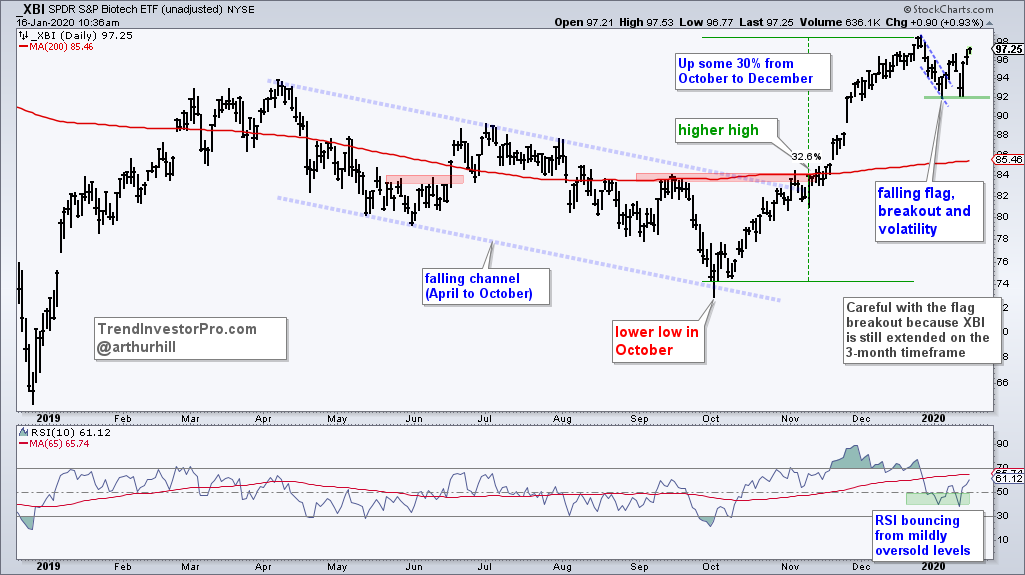 Placing stops with falling flag breakouts is a huge challenge. Put your stop too tight and the risk of whipsaw increases, put your stop too wide and the reward-to-risk ratio suffers. Even though the close below 94 appeared to negate the flag, the flag low held and I think this is as good as any spot for a stop-loss on a flag breakout. The flag clearly failed if price breaches the flag low.

Equal-weights, mid-caps and small-caps came alive this week with consolidation breakouts. This group is placed just below the prior group because the breakouts are more recent. Again, I am splitting hairs.

The first chart shows the Russell 2000 ETF (IWM) with its second falling flag since November. The first was tighter and there was a hard throwback after the breakout. The flag low, however, held and price continued to a new high. The current flag breakout is bullish as IWM also hit a new high. The flag lows mark first support at 163.50. 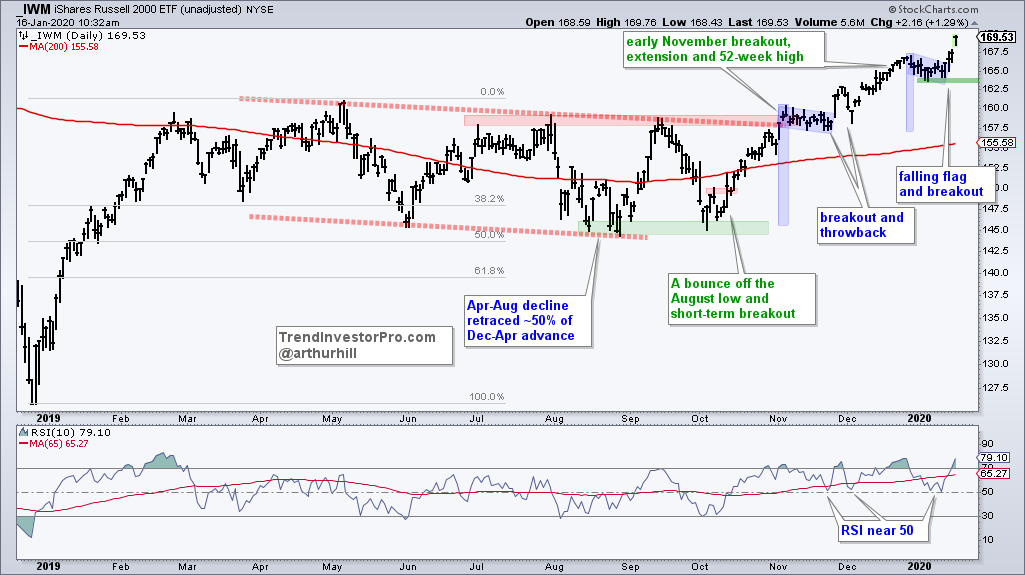 Given the propensity for throwbacks after flag breakouts, chartists trading the flag breakout can also consider closing half the position with a small profit (~2%) and setting the stop for the remainder just below the flag low. This will insure a breakeven trade should the breakout fail.

The Utilities SPDR (XLU) is one of the biggest movers over the last six days with a 3.1% gain. The XLU flag was less conventional because it formed after a relatively short pop. Nevertheless, the essence of the flag was captured (sharp advance and short pullback or consolidation). Also note that RSI(10) moved into the 40-50 zone, which denotes a mild oversold condition, and bounced. 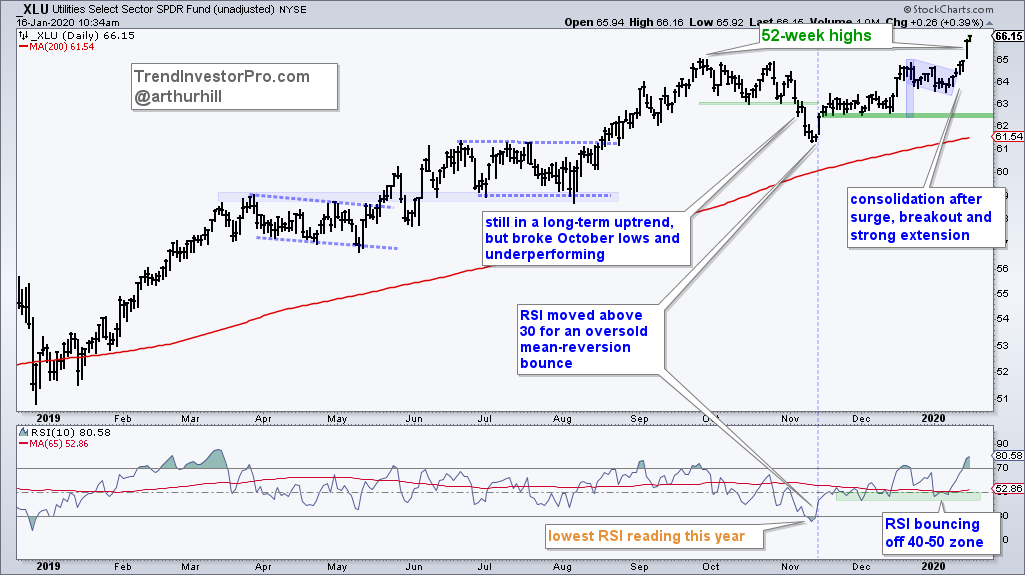 Finally Breaking Out to New Highs 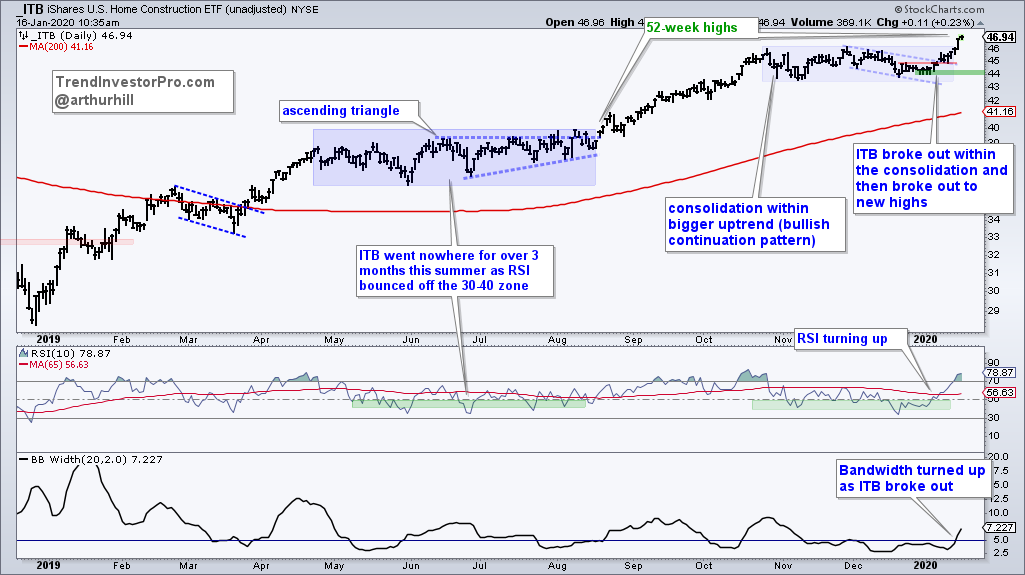 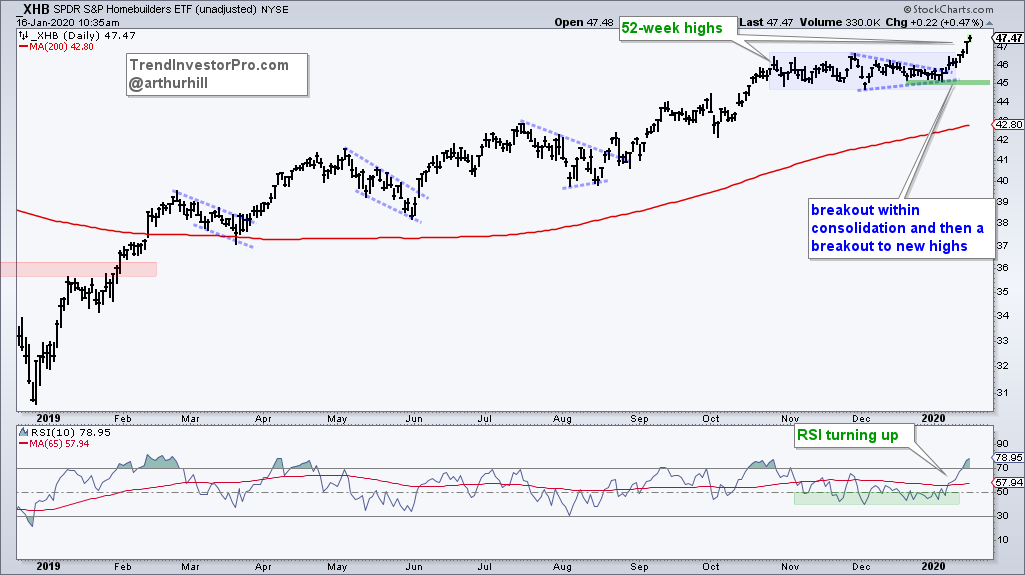 Even though the falling wedge in TLT extended four months, it still looked like a correction after the prior advance because it retraced around 50% and held above the rising 200-day SMA. This is why we need to put price movements into perspective. TLT broke out of the wedge and exceeded last week’s high with a strong move the last five days. 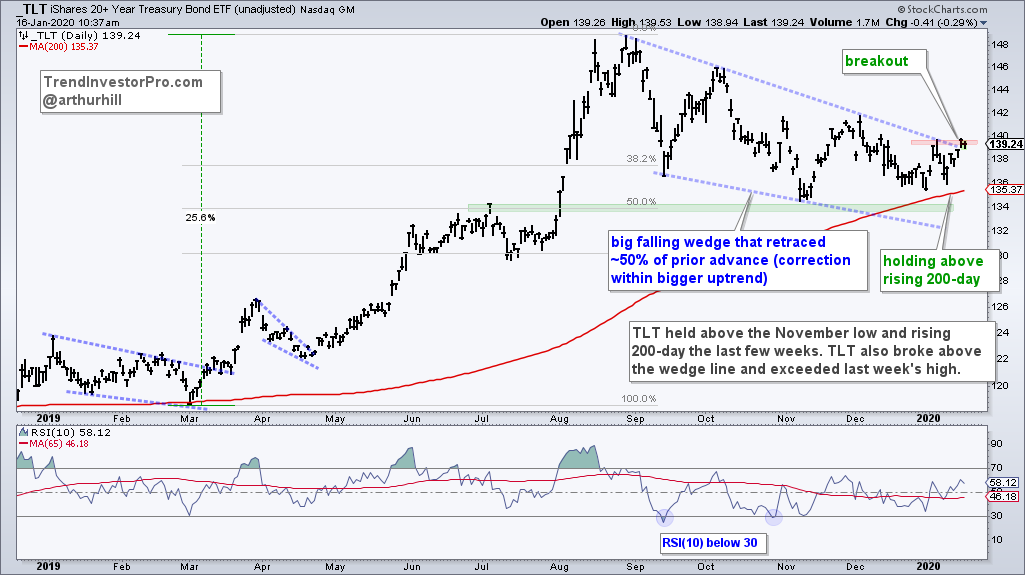 The Gold Miners ETF (GDX) broke out of the falling wedge in early December and then surged above the red resistance zone on December 24th. The broken resistance zone then turned into support and held on the throwback. Notice that a small wedge/flag formed and GDX broke out with a surge the last two days. 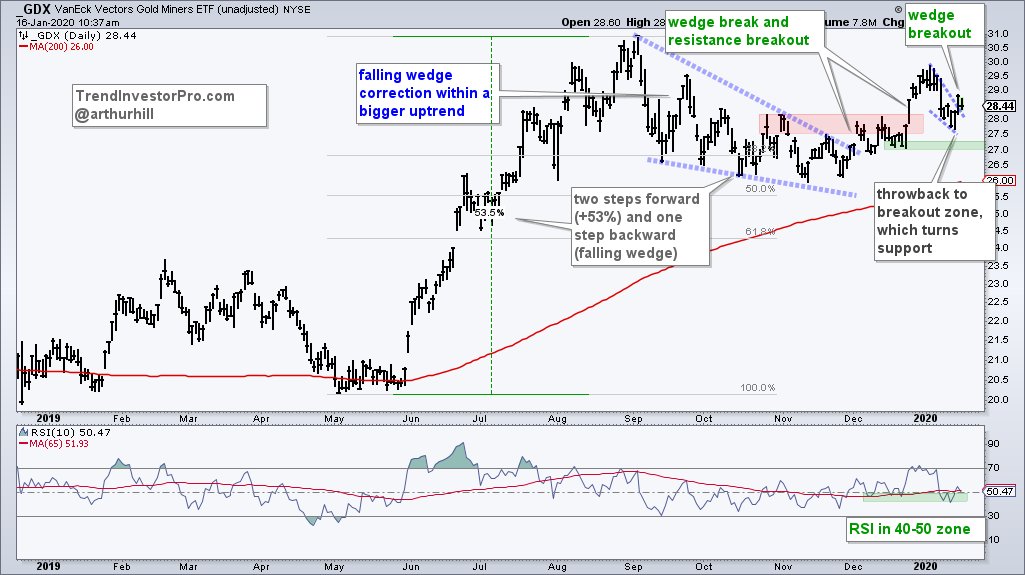 The Regional Bank ETF (KRE) and Bank SPDR (KBE) are setting up this week with small falling wedges. Small falling wedges are just like falling flags: short-term bullish continuation patterns. These two are lagging the market over the last four weeks, but they are still in uptrends overall. The falling wedges/flags formed after sharp advances and new highs. Thus, they are still deemed bullish continuation patterns. Watch for breakouts above the red resistance levels. 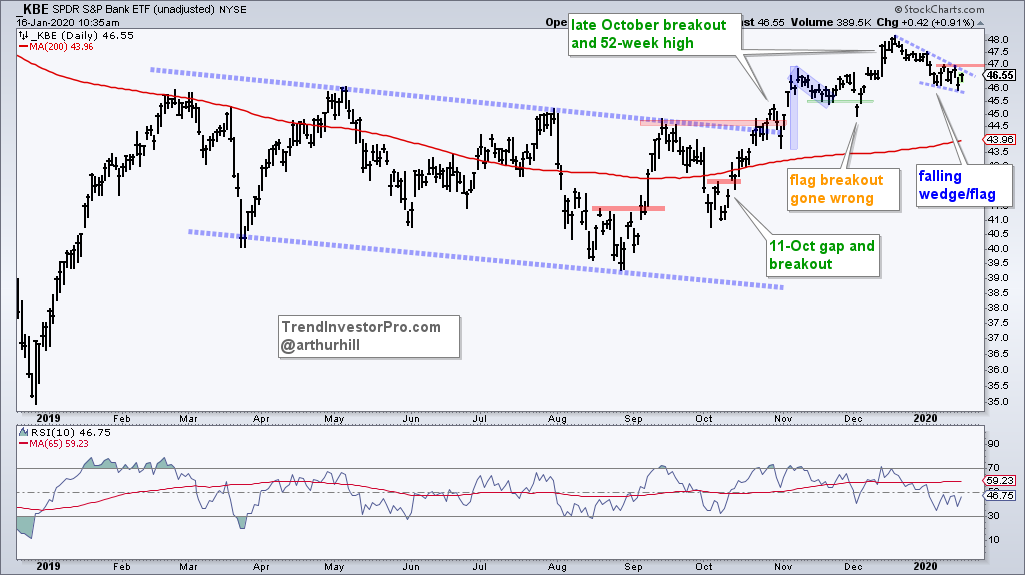 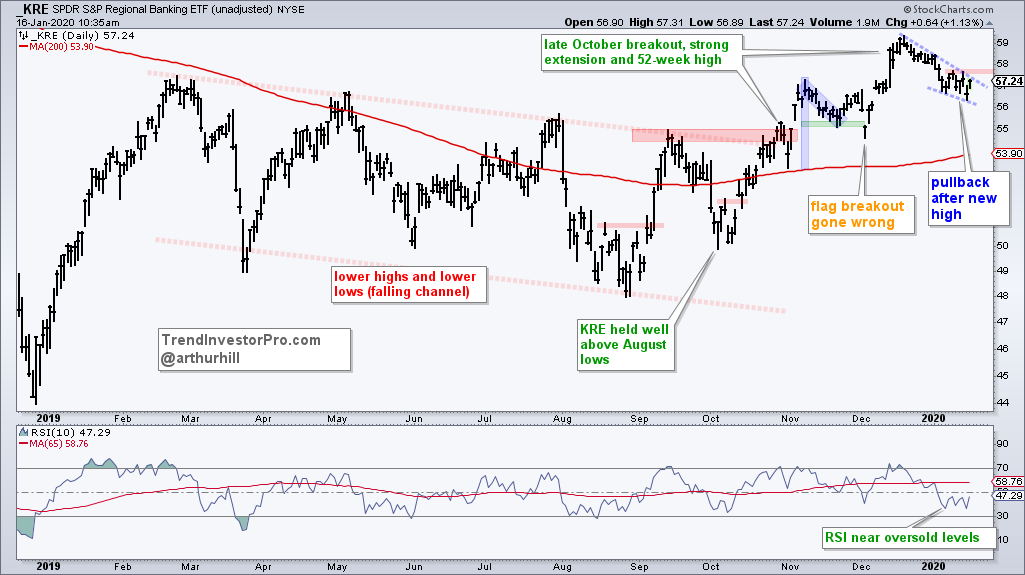 The Materials SPDR (XLB) and Metals & Mining SPDR (XME) did not form falling flags, but they did pull back after breakouts. We do not always get a nice clear pattern or obvious RSI level to work with. Some bullish setups are just plain ugly.  XLB broke out of a falling flag and then fell back to the breakout zone in early January. This looks like a “throwback”, which is actually a bullish setup because broken resistance turns support. This throw back to the breakout zone and offers a second chance to partake. XLB managed to firm and is getting a bounce this week. 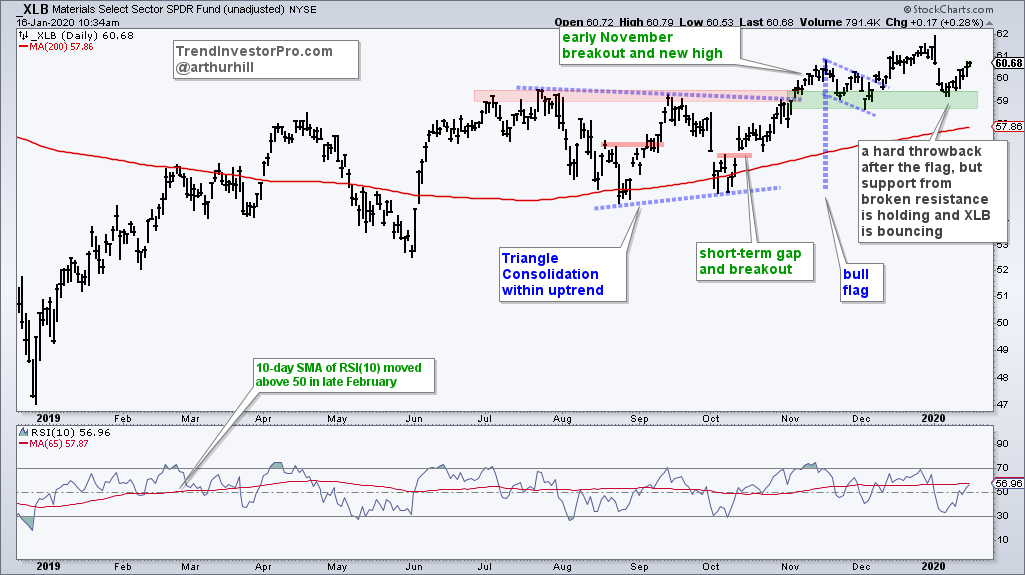 XME did not give us a pattern to work with, but there is a hard throwback and RSI became oversold. On the bullish side, XME formed a Double Bottom and confirmed this pattern with a breakout (and higher high). Even though the January decline moved below the breakout zone, the ETF was entitled to a pullback after a 20% advance. Also notice that the decline retraced around 50% and returned to the 200-day SMA. Combined with oversold RSI, a short-term bullish setup is active and I would watch for a bounce. 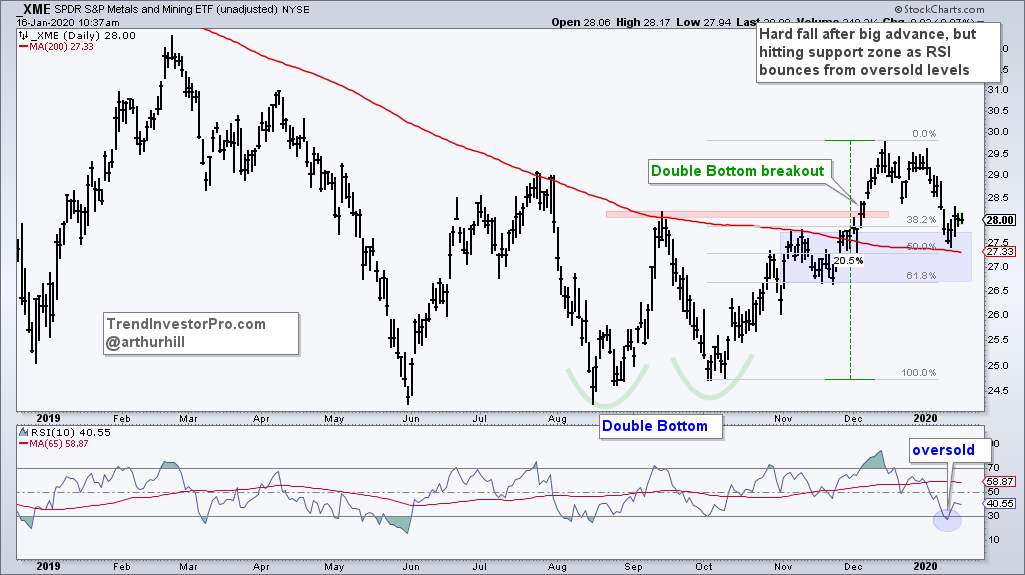 The Strategic Metals ETF (REMX) sprang to life the last three weeks with a double-digit surge that broke the September high and falling 200-day SMA. This is a bullish breakout, but the ETF is way overextended at the moment and without a bullish setup. The early bird gets the worm, but the second mouse gets the cheese. I will keep this one on my radar for a bullish setup down the line. The breakout zone and 200-day mark the first support zone to watch should we get a throwback. 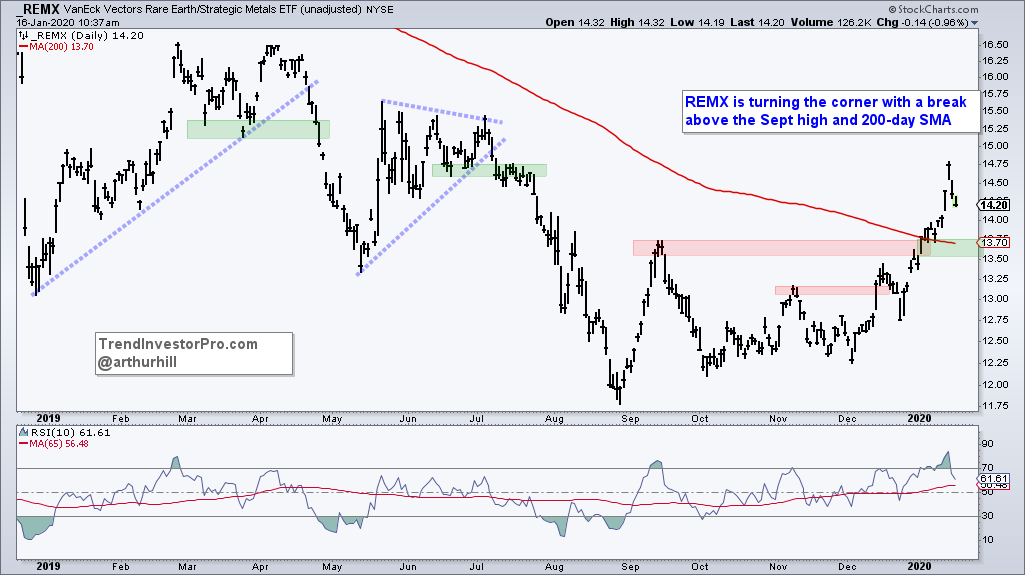 The next two charts were created in Amibroker. The chart is not a sharp as the ones at StockCharts, but I can add custom indicators such as the Weighted Average Stochastic Score (WASS). I also added another indicator for a preview. This indicator is a weighted composite measuring 25, 50, 75, 100 and 125 day highs and lows. WASS moved to its highest level since May and above 60, which is bullish. The Weighted High-Low indicator turned positive in mid December, but shifted back to negative on Wednesday. XLE is trying to turn the corner and reverse its downtrend. 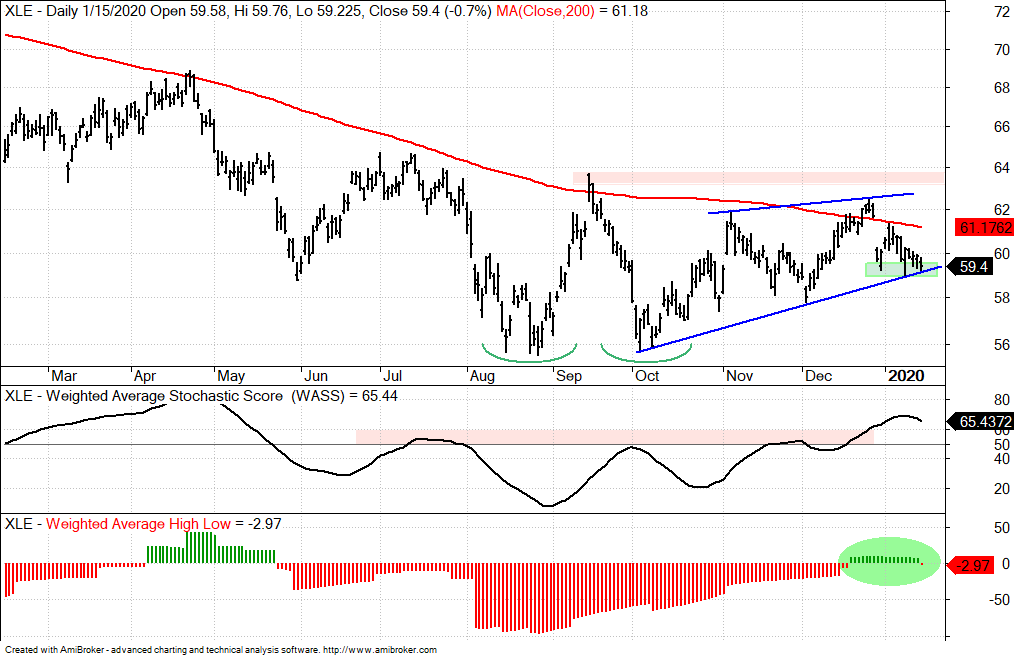 From a charting and pattern perspective, XLE is below its falling 200-day SMA and did not break the September high. This means the long-term trend is still down. A rising wedge formed since October and this is typical for counter-trend advances within a bigger downtrend. XLE is at its moment-of-truth as it tests support in the 59 area.

Ripe for Rest after Becoming Overbought

The next chart shows the Oil & Gas Equipment & Services ETF (XES) with the same two indicators. WASS moved above 50 for the first time since mid May, but the Weighted High-Low indicator remains negative. It is the least negative its been since mid May, but still negative overall. On the price chart, XES broke above its November high, but has yet to exceed its falling 200-day SMA or September high. More work is required here. 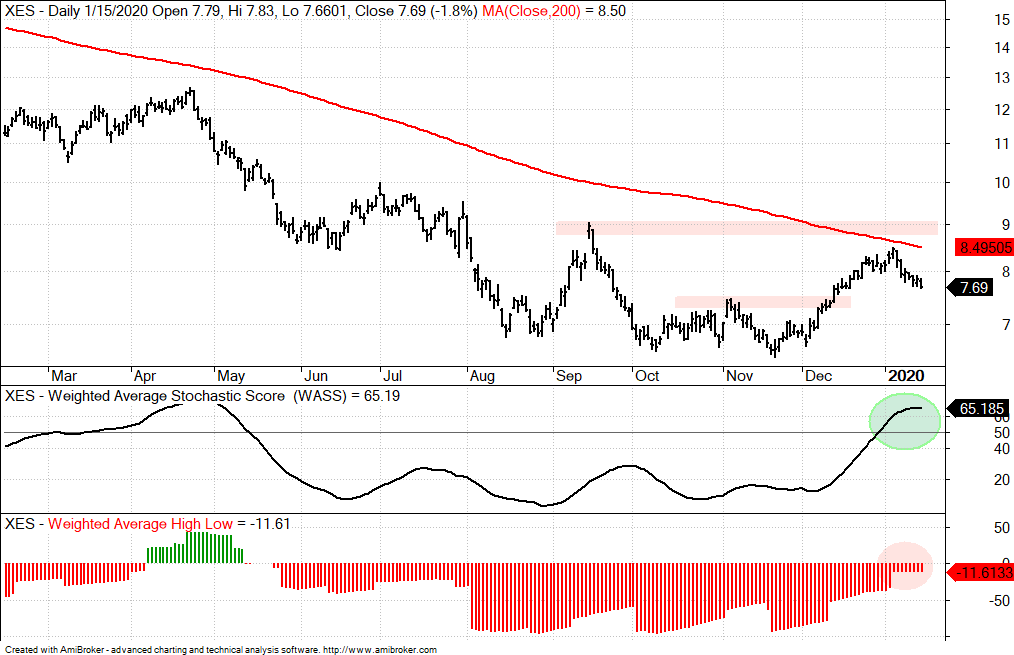 PrevPreviousUnderstanding the Weighted Average Stochastic Score for Ranking and Rotation Strategies
NextMarket Timing Models – Trend, Tape and Fed Maintain the CourseNext
Menu
Subscribe
Twitter Youtube Linkedin
Scroll to Top
We use cookies to understand how you use our site and to improve your experience. By continuing to use our site, you accept our use of cookiesOkNoPrivacy Policy