Note that there are no new stock setups today because the S&P 500 signaled the start of a correction. Bullish setups work better when the S&P 500 is in a bull market and NOT in correction mode.

From Signs of Excess to Increased Volatilty to ....?

On the daily chart, the S&P 500 broke out of a falling pennant and hit a new high. Price action is bullish both long-term and short-term, even though I am still cautious because it looks overextended. The daily Rate-of-Change exceeded 1% five of the last ten days and ATR(22) moved above its 22-day SMA. Volatility is on the rise and an rising volatility is more negative than positive. 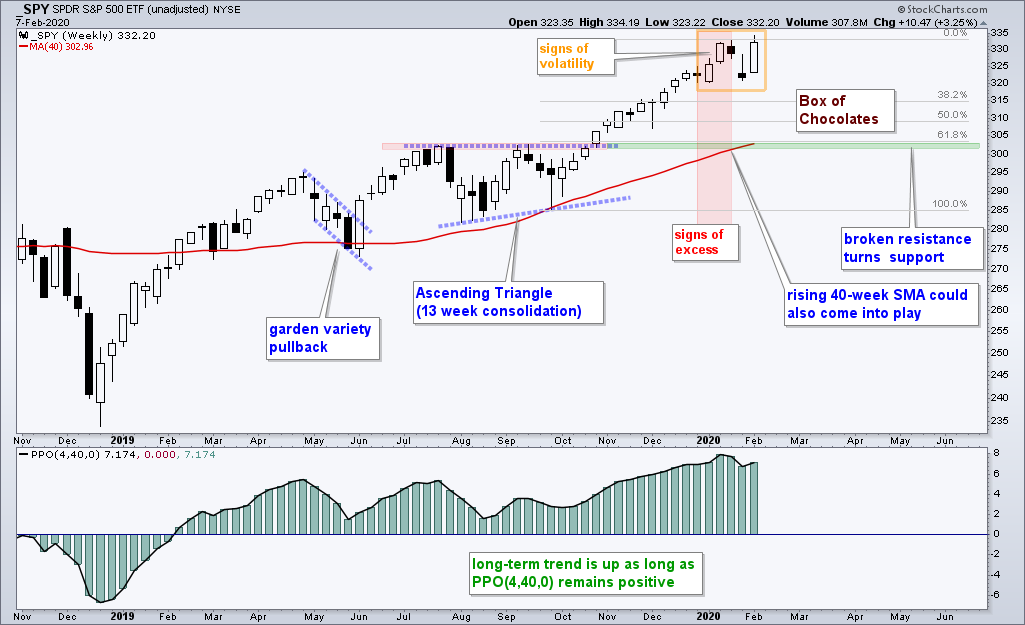 Tuesday’s gaps become the first area to watch for SPY and QQQ. A close below the gap zones would negate the recent pennant breakouts. There are also pennant/flag breakouts and new highs for USMV, MTUM, XLK, XLI, XLC, SKYY, IPAY, FINX and IGV. 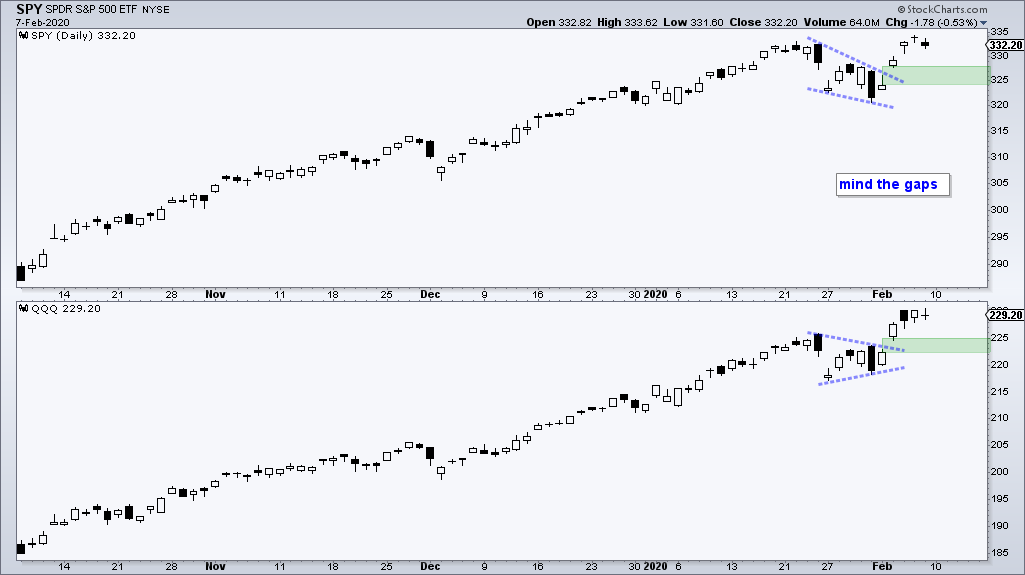 Six of the tech-related ETFs gapped up on Tuesday and these gaps held the rest of the week. I will be watching these gap zones closely. Tech led in 2019 and is leading here in 2020. Failure to hold these gaps zones would show cold feet in the leaders and weigh on the broader market. ETFs with gaps to watch: XLK, SKYY, HACK, FINX, HACK, FDN and IGV 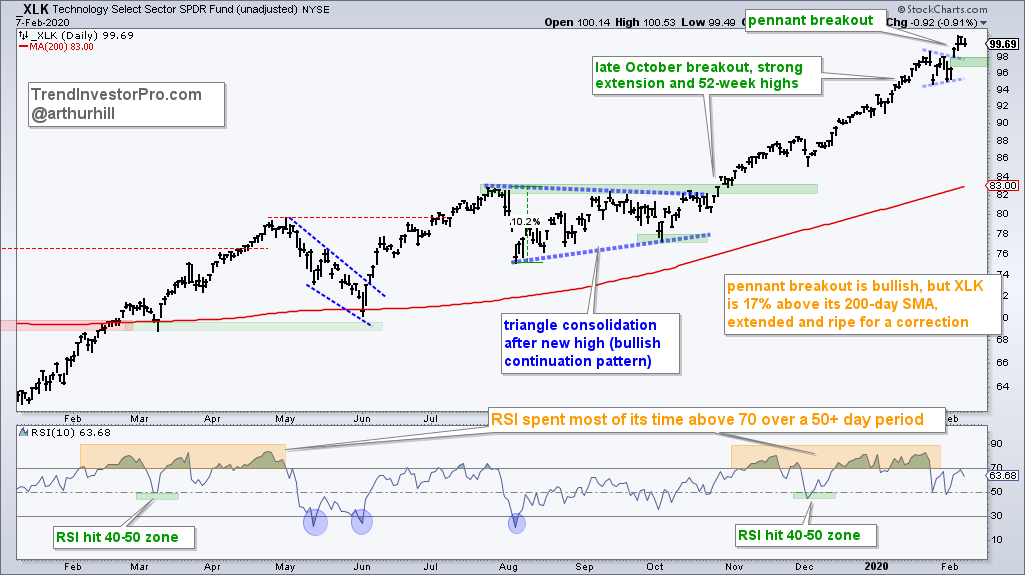 From Breakout, to Breakdown to Recovery

The story for MDY, IWM and IJR: broke out of bull flags in mid January, plunged below the flag lows in late January, became oversold on January 31st, got big mean-reversion bounces and moved above the prior support breaks (flag lows). The mean-reversion setup beat out the flag this time around. In fact, I think mean-reversion setups (RSI(10) below 30) win more often than flag/pennant breakouts. 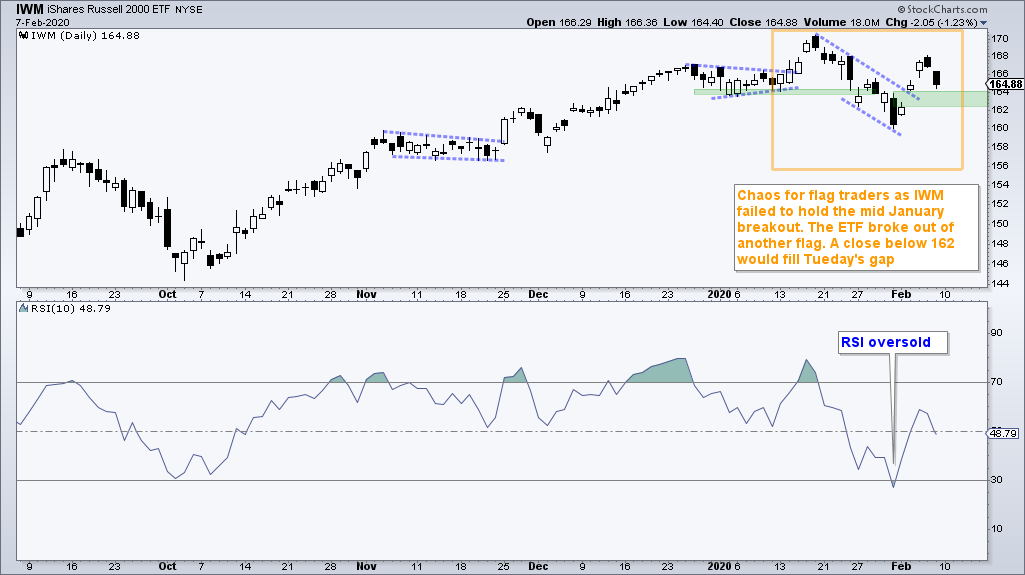 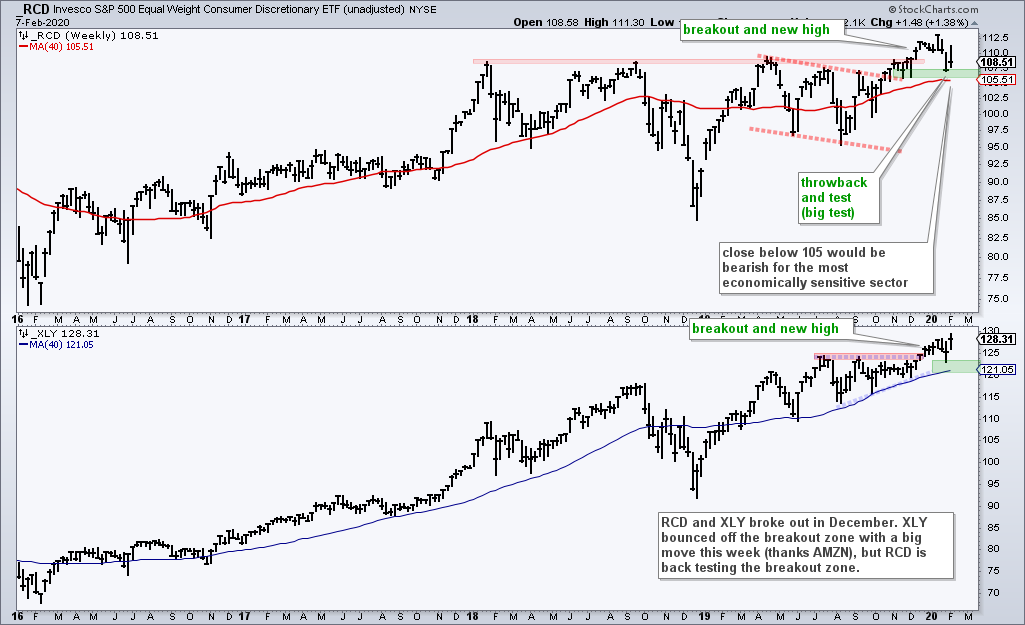 The Russell 2000 ETF (IWM) and S&P SmallCap 600 SPDR (IJR) led way lower over the last 10 days with declines that exceeded 5%. XLE and XLB are the only sector SPDRs trading below their 200-day SMAs, and XLE is the only sector to hit a new low. XLU was the only sector with a gain this week.

The Finance SPDR (XLF) and EW Finance ETF (RYF) became leaders as both recorded new 52-week highs this week. The Regional Bank ETF (KRE) and Bank SPDR (KBE), however, fell well short of their January highs. The Insurance ETF (KIE) is leading within the Finance sector as the ETF hit new highs on Tuesday, Wednesday and Thursday. KIE has been one of our tortoise uptrends for a while now (slow and steady), and continued to perform well. Other tortoise uptrends include: XLP, XLRE, XAR, ITB, XHB and IYR. 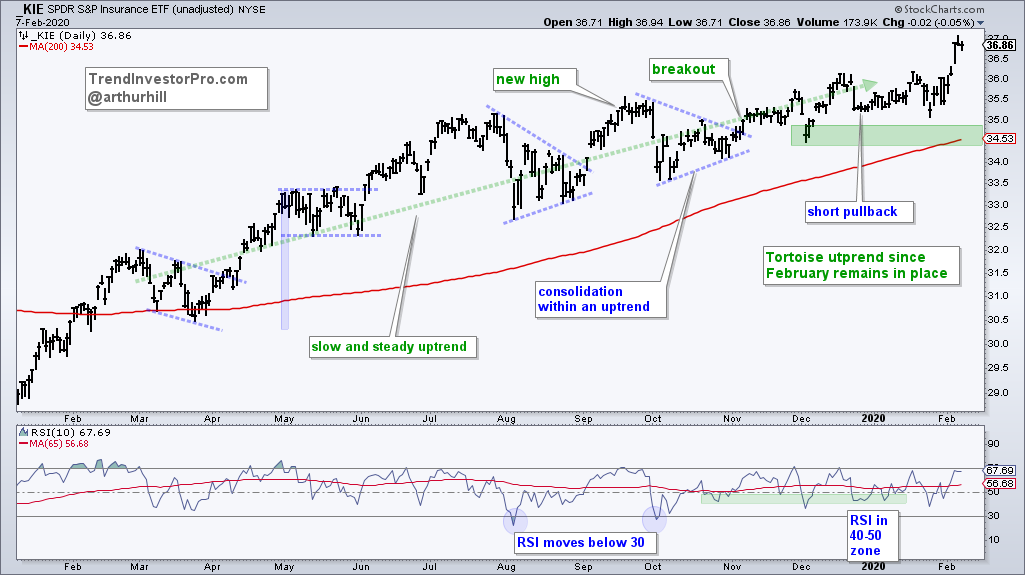 I count at least 10 ETFs that are oversold (RSI(10) near 30) and above their rising 200-day SMAs. They are also near key retracement levels and some are near broken support levels. These include XLV, IJR, IBB, IWM, ETA, IHF, MDY, KRE, KBE and XBI. The broader market is also setting up for at least a bounce, but I do not think this bounce will mark the end of the corrective period. Thus, traders looking to play a bounce will need to be extra vigilant. Make a plan before you consider a trade and then trade according to that plan!

Putting Flags and Pennants into Perspective 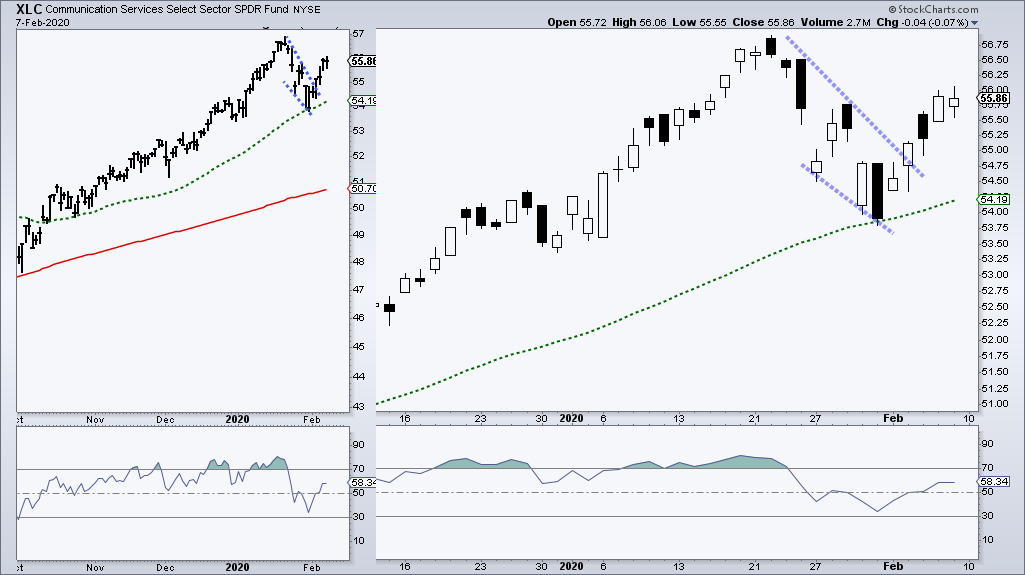 The Regional Bank ETF (KRE), Biotech ETF (IBB) and others got strong mean-reversion bounces this week. KRE and the Bank SPDR (KBE) are already pulling back with declines the last two days, while IBB and the Biotech SPDR (XBI) remained strong on Thursday-Friday. This is where traders need to plan their trade and trade their plan. Mean-reversion strategies often use profit targets for exits (as oppose to trailing stops). Trend-following systems typically use trailing stops to ride the trend. Mean-reversion trading is more like scalping where traders take profits fairly quickly and move on without looking back. Profit targets can be percentage or ATR based. A hybrid strategy would be to set a very tight trailing stop, but this is also tricky. The chart below shows IBB holding above 120 the last two days. A move below 120 would not necessarily be bearish, but it could be used to exit a mean-reversion trade. However, keep in mind that a little intraday noise could easily trigger this stop and slice 1.5 points off the profit (based on the current close). 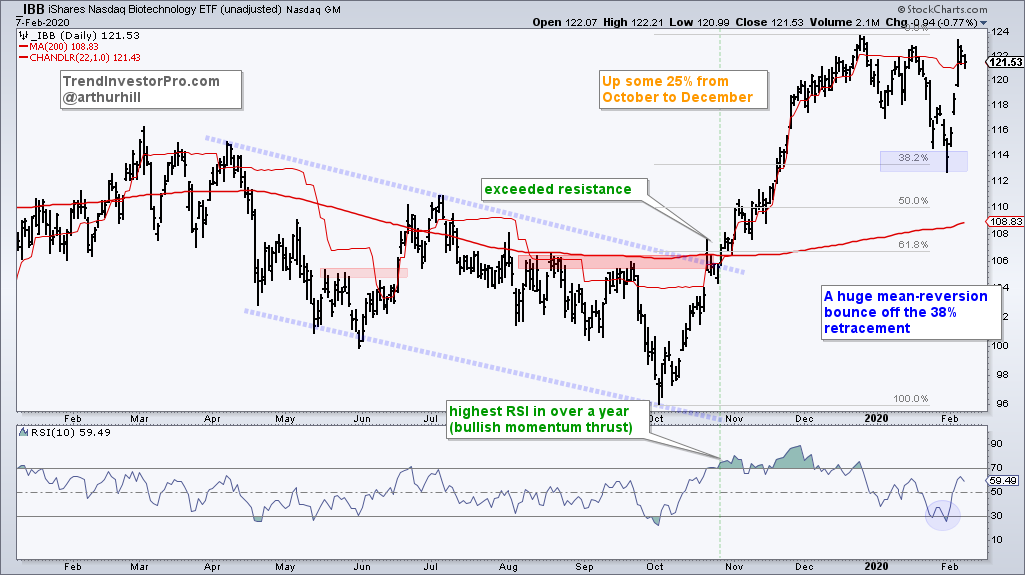 The 20+ Yr Treasury Bond ETF (TLT) broke out of a big wedge in late January and surged to the 146 area. The ETF fell back early this week as money rushed into stocks. However, RSI(10) hit the 50 area (mild oversold condition) and TLT bounced the last two days. The bigger wedge breakout remains in play and a mean-reversion bounce is underway. 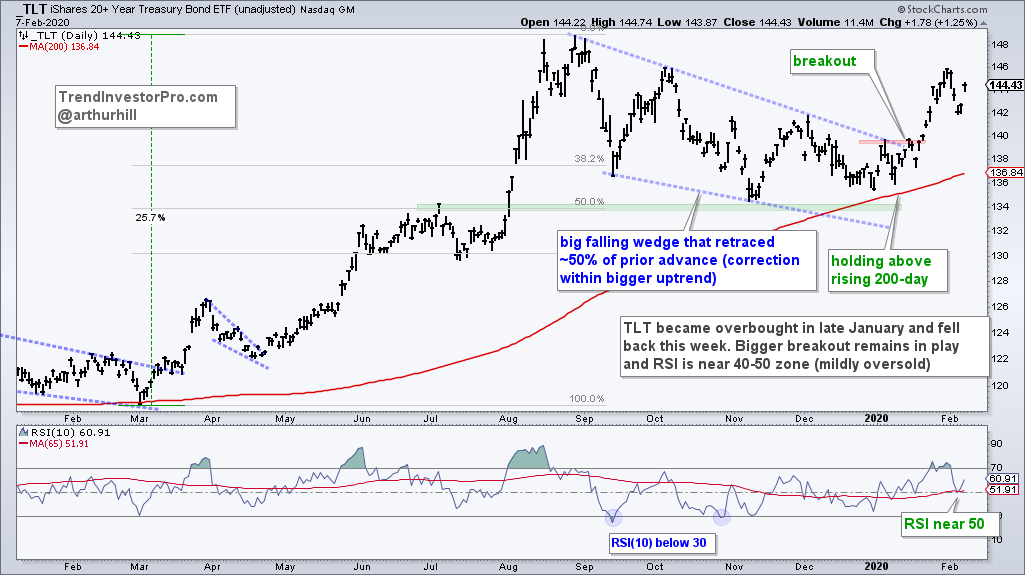 The Gold SPDR (GLD) also broke out of a falling wedge in late December and surged to new highs. The ETF fell back on Monday during the rush to risk-on, but firmed near the mid January lows and RSI(10) hit the 40-50 zone. GLD bounced the last three days and a mean-reversion bounce is underway. 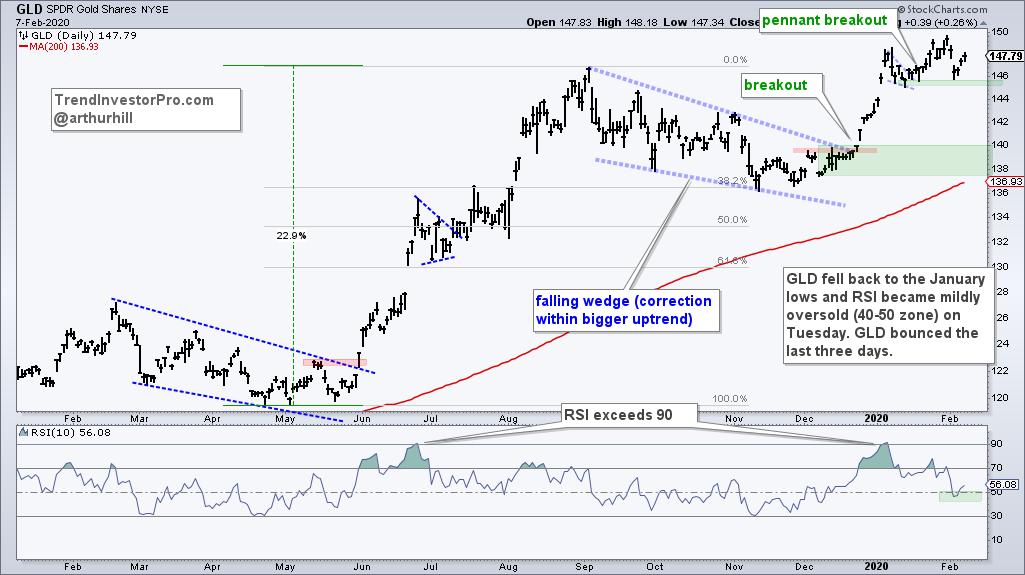 Gold and Dollar are Up this Year 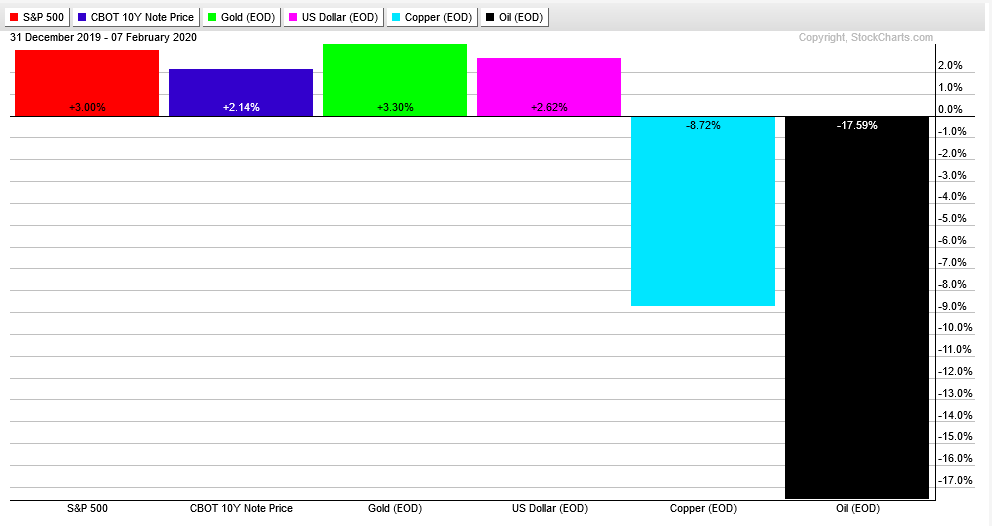