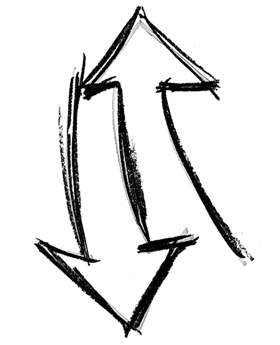 The big trends remain up, but medium-term breadth and price action suggest that we are currently in a corrective period. The equal-weight S&P 500 ETF, mid-caps and small-caps got the correction memo, but large-cap techs, SPY and QQQ did not. Healthcare stocks are also holding up well and contributing to strength in SPY.

Even though SPY, QQQ and large-cap techs are performing well, there are several reasons for concern right now. First, QQQ and XLK are short-term overbought and ripe for at least a rest. Second, the 20+ Yr Treasury Bond ETF (TLT) is outperforming SPY and QQQ. Third, several key offensive sectors are down since May (industrials, finance, consumer discretionary, materials). Fourth, the seasonal patterns are strong for July, but very weak for August and September.

Throw in an S&P 500 that is up over 30% since late October, and we have the recipe for choppy seas (correction) the coming weeks or months. While a correction would pave the way to the next bullish setup, it could make short-term trading treacherous.

When does a correction turn into a long-term reversal or bear market? When the Composite Breadth Model turns bearish. The CBM remains firmly bullish despite the deterioration in short-term and medium-term breadth. See the Market Regime page for breadth chart updates, yield curves and the Fed balance sheet.

The Friday (9-Jul) update covers the broad market environment and the Saturday update (10-Jul) will cover the ETF Trends, Patterns and Setups.

Think I will reread Reminiscences of a Stock Operator and Trading in the Zone, which are two of the twelve books on my reading list.

SPY Grinds to Another New High

The S&P 500 SPDR (SPY) continues to benefit from rotations within the index and grind higher. Techs weakened from mid February to mid May, but strength in industrials, finance, healthcare and materials picked up the slack. Industrials, finance, materials and staples weakened since May, but tech, communication services and healthcare picked up the slack. As a result, SPY continues to grind higher and maintain its steady uptrend. SPY hit a new high on Wednesday and fell back on Thursday. Short-term, SPY is a bit extended and could pullback towards the rising 50-day SMA. 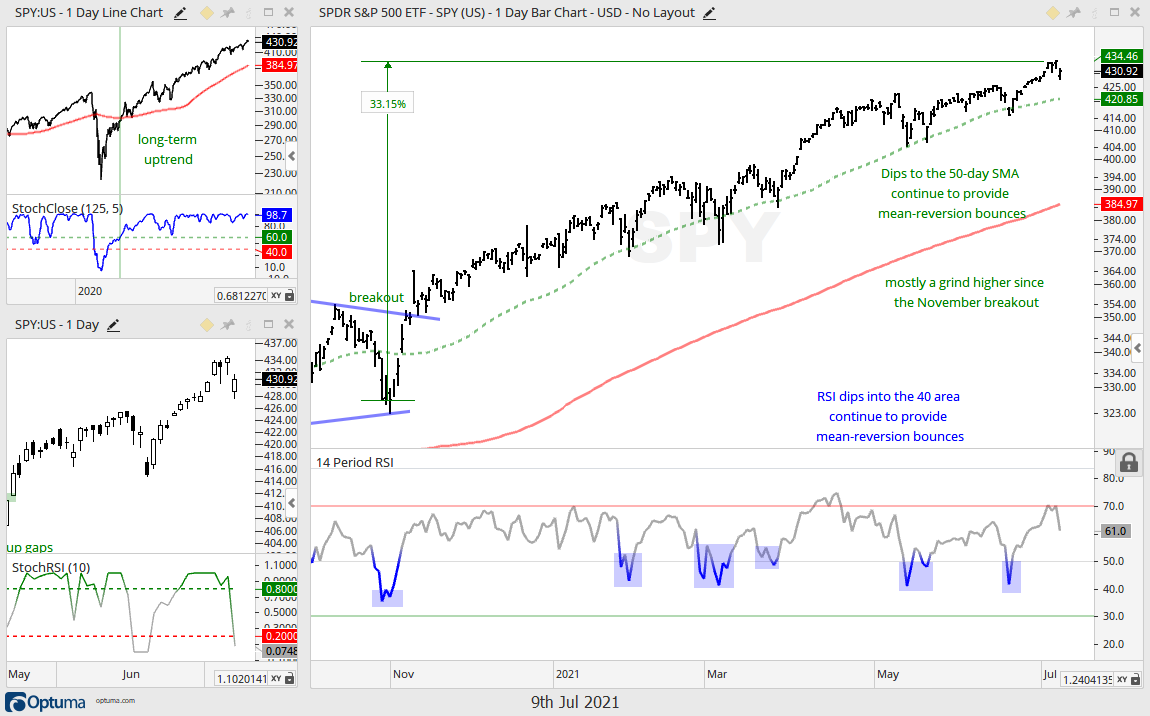 Big techs are powering SPY since mid May because the Nasdaq 100 ETF (QQQ) surged some 14% from mid May to early July. The stocks in QQQ account for around 40% of SPY. Among the sectors, the Technology SPDR (XLK) accounts for 27.7% and the Communication Services SPDR (XLC) accounts for 11.1%. The chart below shows QQQ in a clear uptrend with a string of new highs since mid June, but the ETF is short-term overbought and ripe for a rest. RSI hit 77 on Wednesday and the eight week gain was around 14.3%. 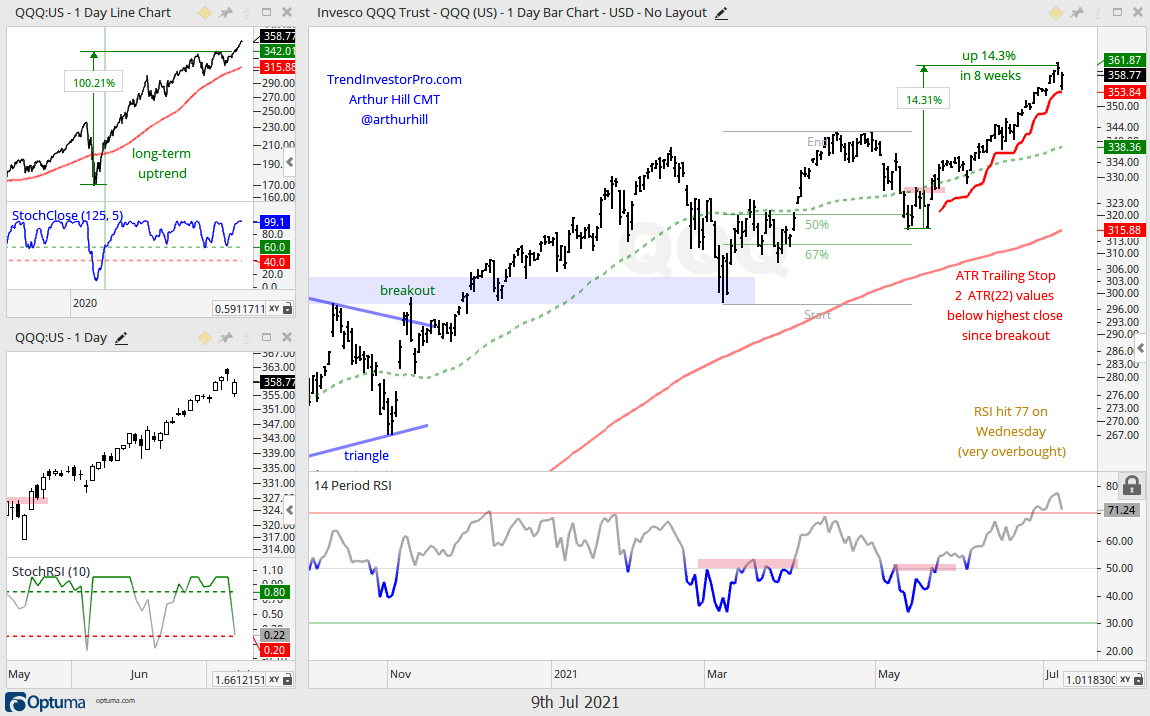 The performance differential is immediately clear when we look at the S&P 500 EW ETF (RSP), which does not favor large-caps and limits the weighting of the tech sector. While SPY hits a new high, RSP remains range bound with a triangle forming. Even though this is a bullish continuation pattern, note that RSI was in a bull range (40 to 80) from early November to mid June and broke its bull range in the second half of June. A triangle breakout and RSI break above 60 are needed to signal an end to the corrective period. 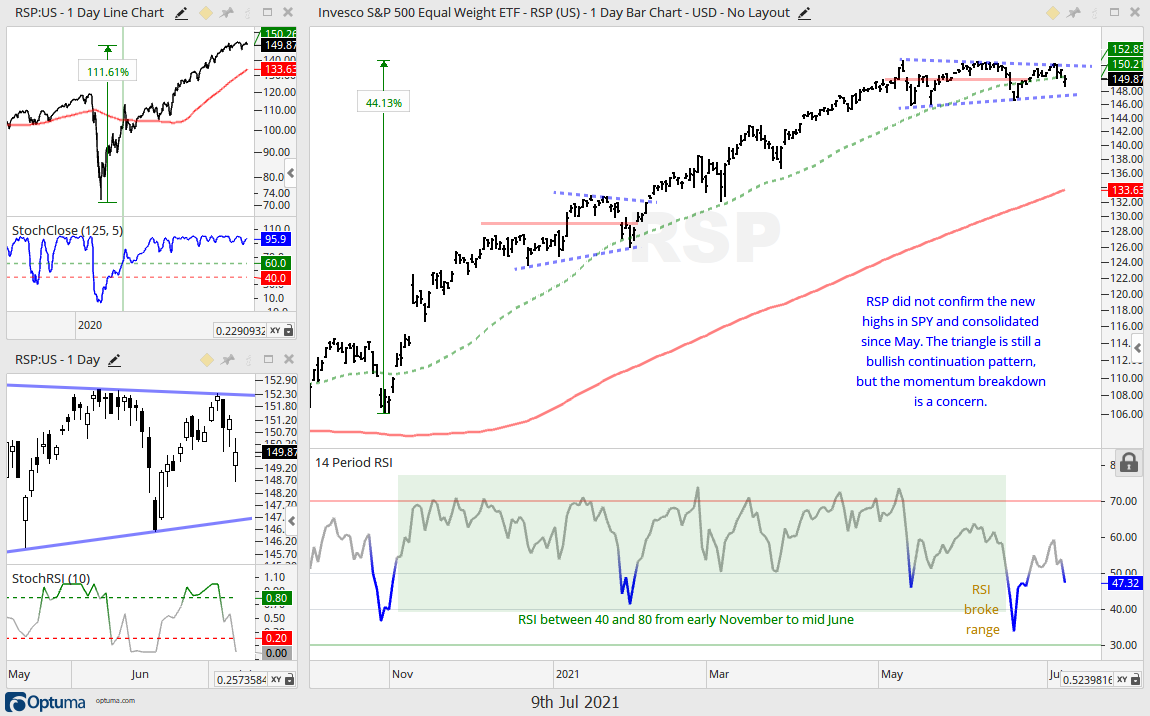 The performance differential is immediately clear when we look at the S&P 500 EW ETF (RSP), which does not favor large-caps and limits the weighting of the tech sector. While SPY hits a new high, RSP remains range bound with a triangle forming. Even though this is a bullish continuation pattern, note that RSI was in a bull range (40 to 80) from early November to mid June and broke its bull range in the second half of June. A triangle breakout and RSI break above 60 are needed to signal an end to the corrective period.

The S&P SmallCap 600 SPDR (IJR) and Russell 2000 ETF (not shown) are just one big mess with a choppy range since mid March. IJR broke out to a new high on June 8th and RSI got back above 60 (green shading), but this did not last long as IJR fell back below the 50-day SMA and RSI broke below 40 again. 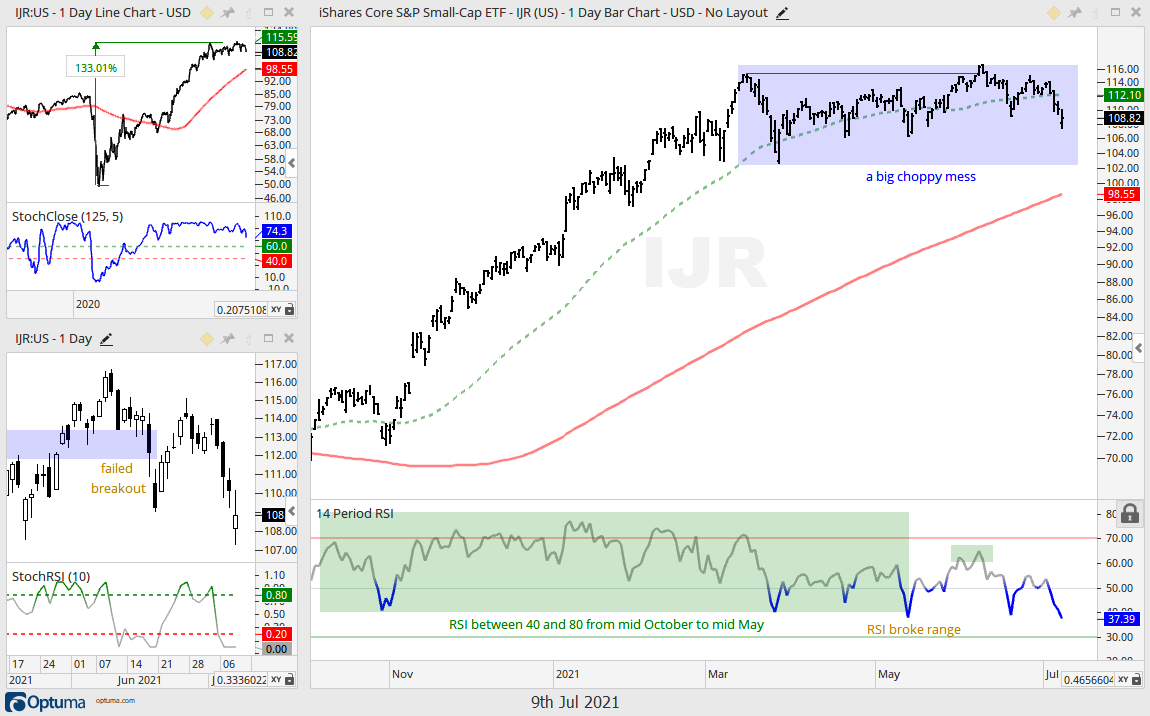 TLT is Outperforming SPY and QQQ

The inter-market performance chart shows a big disparity within commodities and stocks. This next chart shows the percentage change for 14 intermarket ETFs since May. The DB Energy ETF (DBE) is up big since May, but the DB Base Metals ETF (DBB) and DB Agriculture ETF (DBA) are down. The Nasdaq 100 ETF (QQQ) is up big, but the Russell 2000 ETF (IWM) is down over this period. 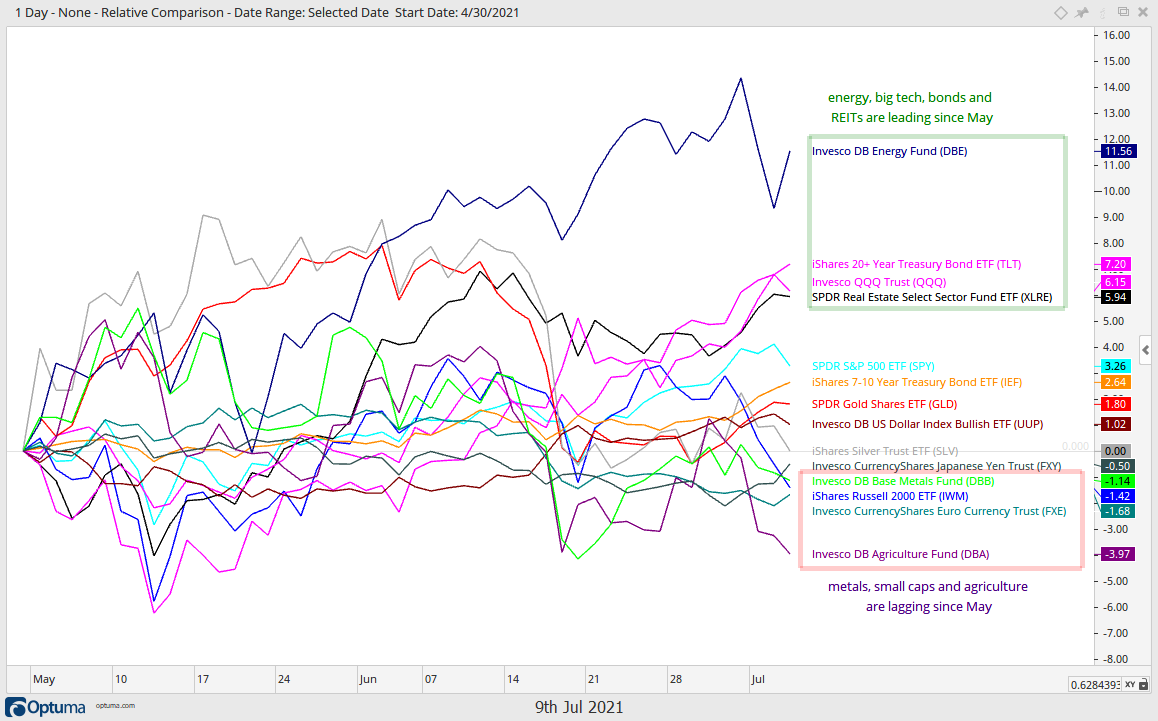 Elsewhere, the 20+ Yr Treasury Bond ETF (TLT) is outperforming QQQ over this period with a whopping 7.2% gain. Perhaps QQQ is liking the recent decline in interest rates. Even so, TLT is outperforming both QQQ and SPY, and money is moving into safe-haven Treasuries for some reason. Continued strength in Treasuries is a concern because the bond market is often smarter than the stock market. Treasuries rise and rates fall when inflationary expectations subside and/or when the economic outlook dims.

Sell Industrials, Finance and Consumer Discretionary in May

The going within the stock market has been quite tough since May with six of the ten equal-weight sectors down, and five up. The EW Healthcare ETF (RYH), EW REIT ETF (EWRE), EW Technology ETF (RYT), EW Energy ETF (RYE) and EW Communication Services ETF (EWCO) are up and lifting the S&P 500 EW ETF (RSP) to a slight gain. Basically, tech and healthcare related stocks are powering the market right now. Energy and REITs are helping, but they are relatively small sectors. 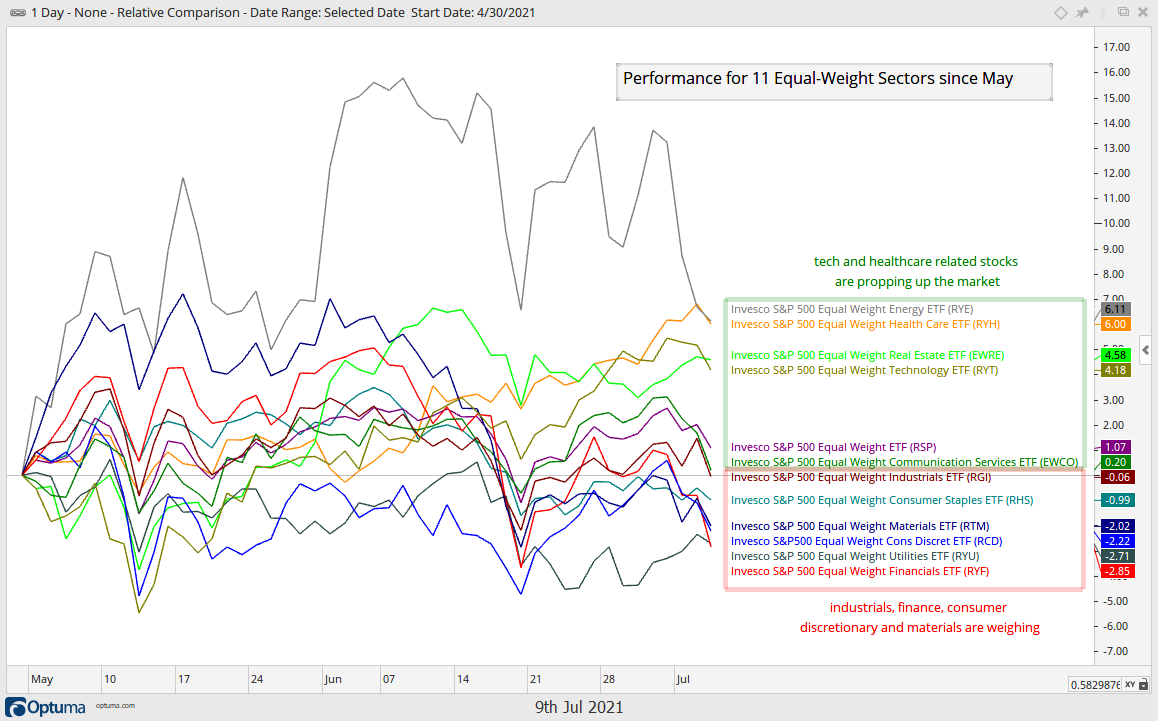 Weakness in some of the key offensive sectors is a concern. The EW Industrials ETF (RGI), EW Consumer Discretionary ETF (RCD) and EW Finance ETF (RYF) are down with finance leading the way. These are three big sectors tied to the economy and they are dragging their feet. The EW Materials ETF (RTM) is down the most and also tied to the economy, but it is a relatively small sector.

Unsurprisingly, we continue to see deterioration in medium-term breadth. The percentage of stocks above the 50-day SMA continues to weaken for the S&P 500, S&P MidCap 400 and S&P SmallCap 600. In addition, the 13-week High-Low Line turned down for the S&P SmallCap 600 and S&P MidCap 400. Before looking at these two indicators, let’s first review the 13-week High-Low Line. 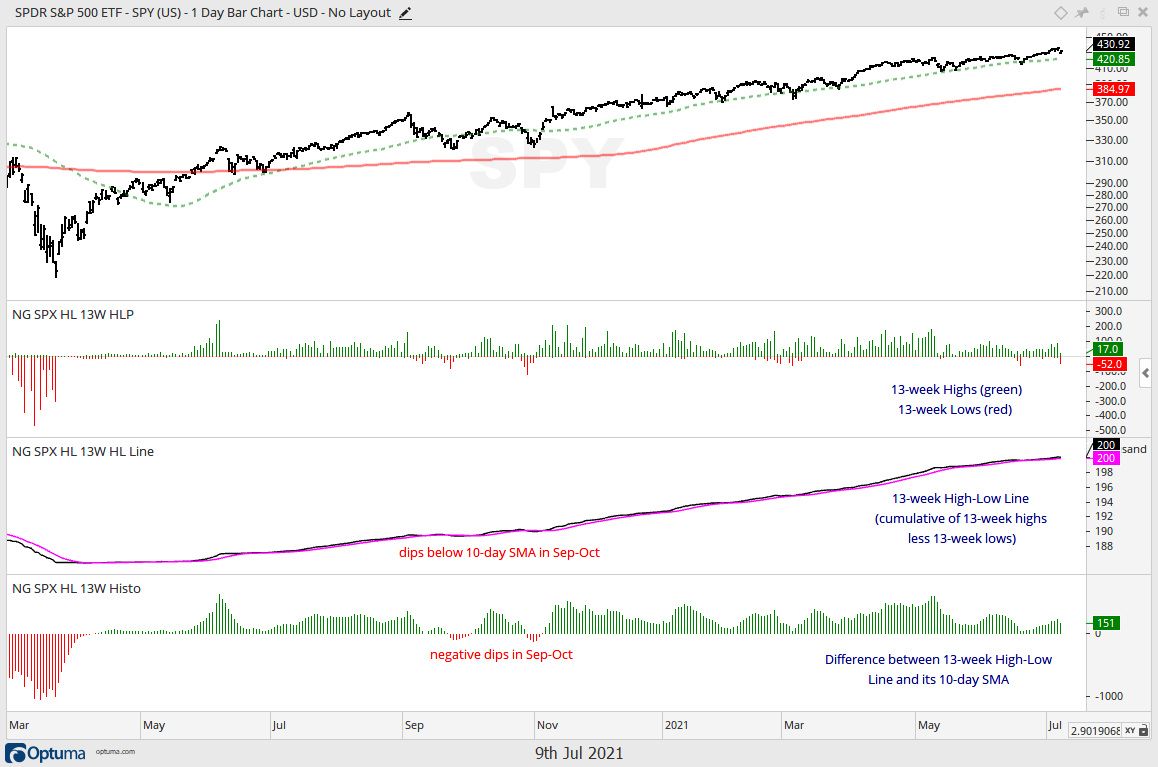 The first chart shows these two breadth indicators for the S&P 500, which is the strongest of the three indexes right now. The %Above 50-day SMA was above 85% in April and then started to deteriorate in May. The indicator dipped to 31% on June 18th and this was the lowest reading since late October. The horizontal gray line is at 30 for reference. Notice that the indicator dipped below 30% in September and October. The first dip in September signaled the start of a corrective period. Also note that SPY hit a new high on Wednesday and only 49% of its component stocks were above their 50-day SMAs. 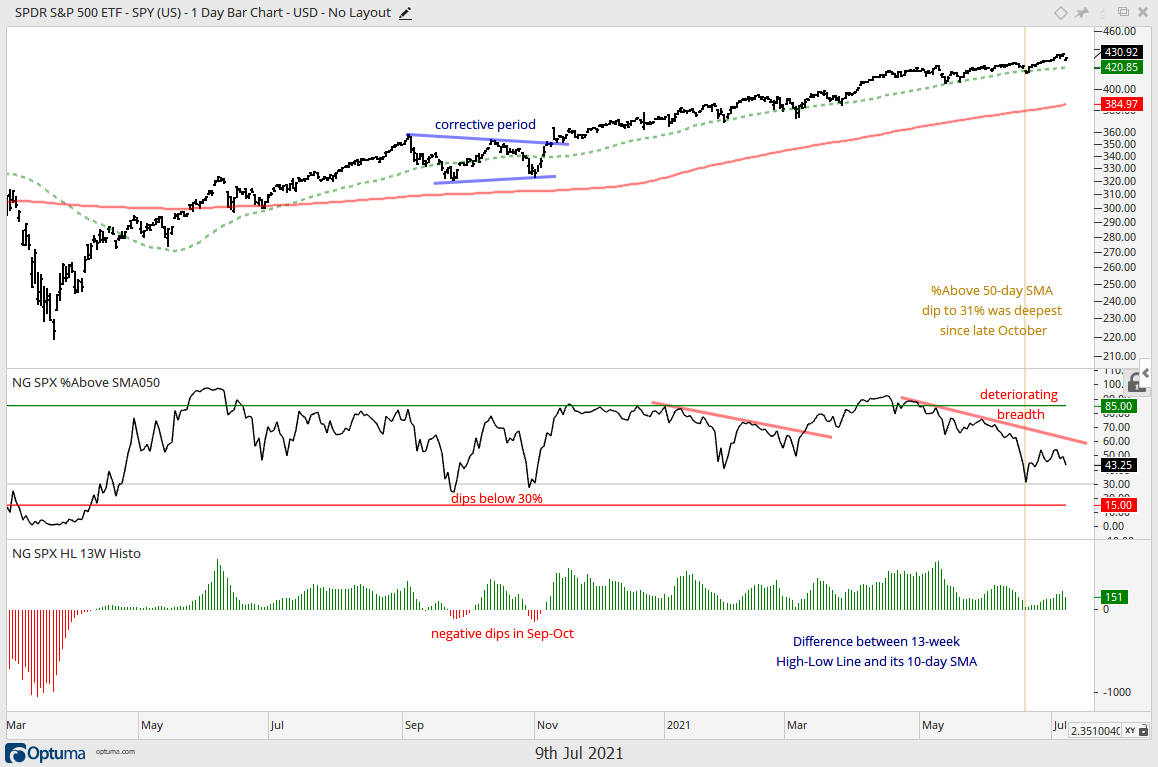 The lower window shows the difference between the 13-week High-Low Line and its 10-day SMA as a histogram. There were negative dips in September and October (red bars) and this coincided with the corrective period in SPY (blue triangle). Currently, the 13-week High-Low Line remains above its 10-day SMA because the histogram is positive. A dip into negative territory would suggest a downturn and argue for a corrective period for SPY.

The deterioration in breadth becomes more prevalent as we move down in market cap. The next chart shows the same indicator for the S&P MidCap 400. %Above 50-day SMA was above 85% in late April and then steadily deteriorated the last two months. The dip below 30% on June 18 was the lowest reading since late September. The lower window shows the 13-week High-Low Line turning down as the histogram turned negative (red box). The index has been correcting since late April with a falling channel (blue lines). A channel breakout and surge back above 50% in %Above 50-day SMA is needed to end this corrective period. 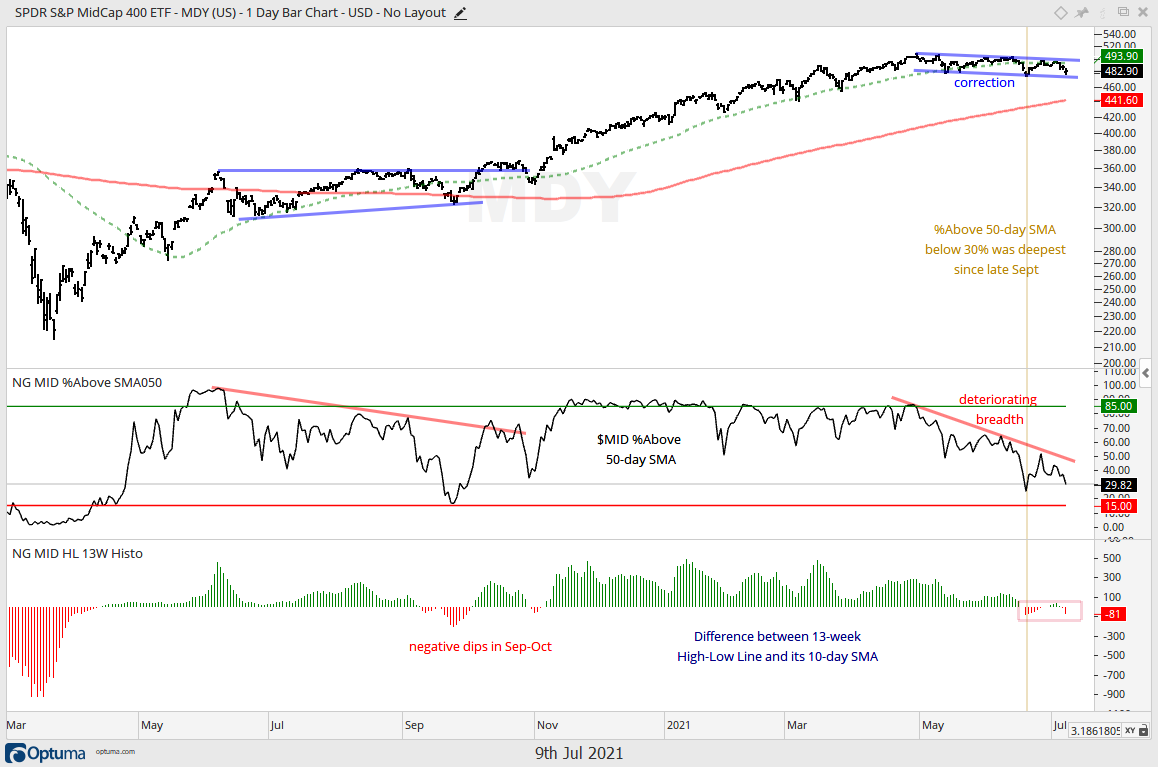 The next chart shows the same indicator for the S&P SmallCap 600. %Above 50-day SMA was above 85% in March and then started to deteriorate. The indicator dipped below 30% this week and this is the lowest reading since late September. The lower window shows the difference between the 13-week High-Low Line and its 10-day SMA. This indicator turned negative in late June and early July. This week’s negative dip is the deepest since late September. 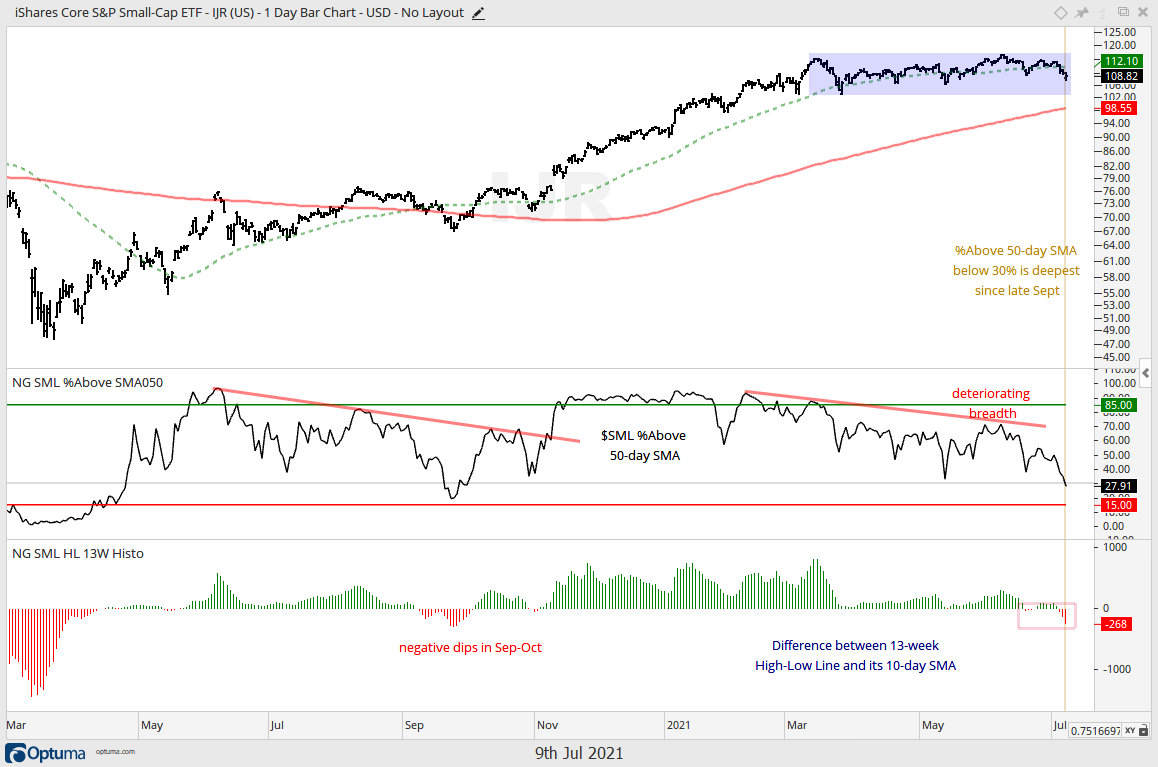