The market regime remains bullish, but we are seeing corrective price action over the last few months. The Nasdaq 100 ETF started it all off with a sharp decline from mid February to early March. IWM got involved this week with its biggest fourth decline greater than 9% since March 2020. SPY has largely avoided the correction fray and remains the strongest of the big three. 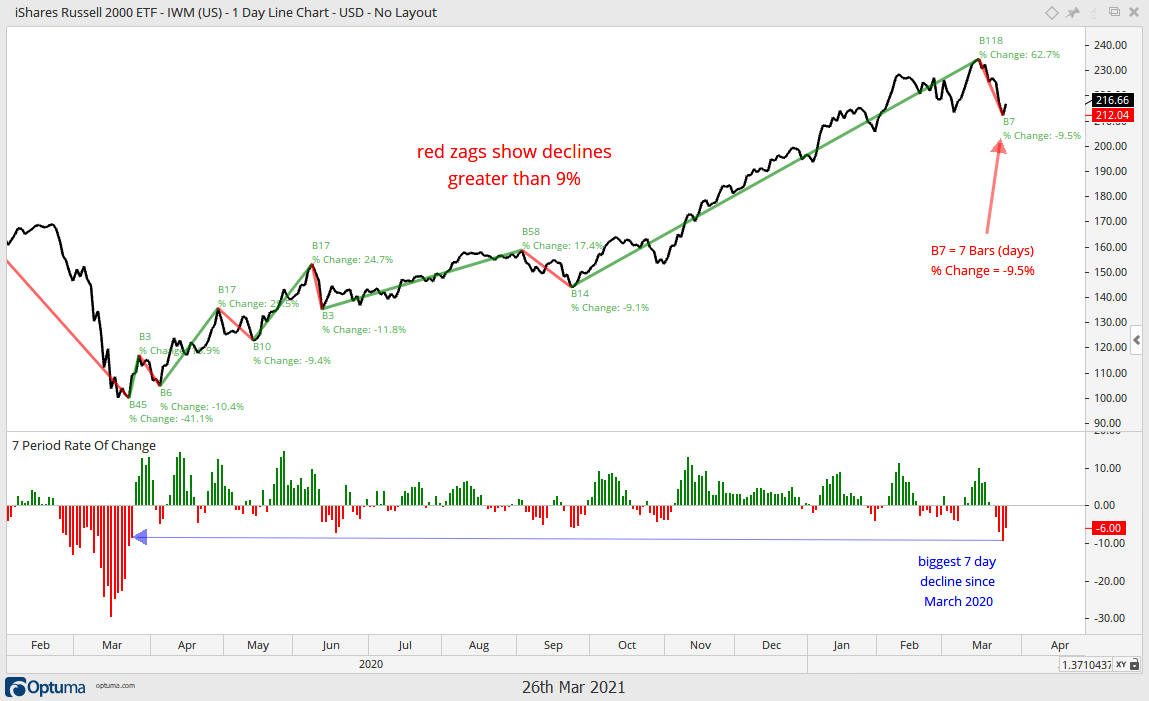 Today’s report will focus on the short-term situation with the big three: SPY, QQQ, IWM. This is because I am seeing some short-term relative strength in QQQ and short-term relative weakness in IWM. In addition, QQQ could be setting up bullish. We then turn to two bullish seasonal patterns, review the Composite Breadth Model and finish with the yield spreads.

There are some bullish seasonal patterns coming into play over the next few weeks. First, the bullish turn-of-the-month seasonal pattern kicked in with Thursday’s close. There is an eight day bullish period that extends from the last four days of one month to the first four days of the next month. The next eight trading days extend from March 26th to April 8th. There is an extra day because the stock market is closed on Good Friday, April 2nd.

Testing this eight day period over the last twenty years, SPY advanced 68% of the time and declined 32% of the time. The average gain was 2.2% and the average loss was 2.24%. Trading this as a strategy resulted in an 8.24% Compound Annual Return (CAR), just for being invested 8 days per month (35% of the time). Note that these numbers are based on the 8-day Rate-of-Change from the close the day before the eight day period starts to the close on the eighth day. 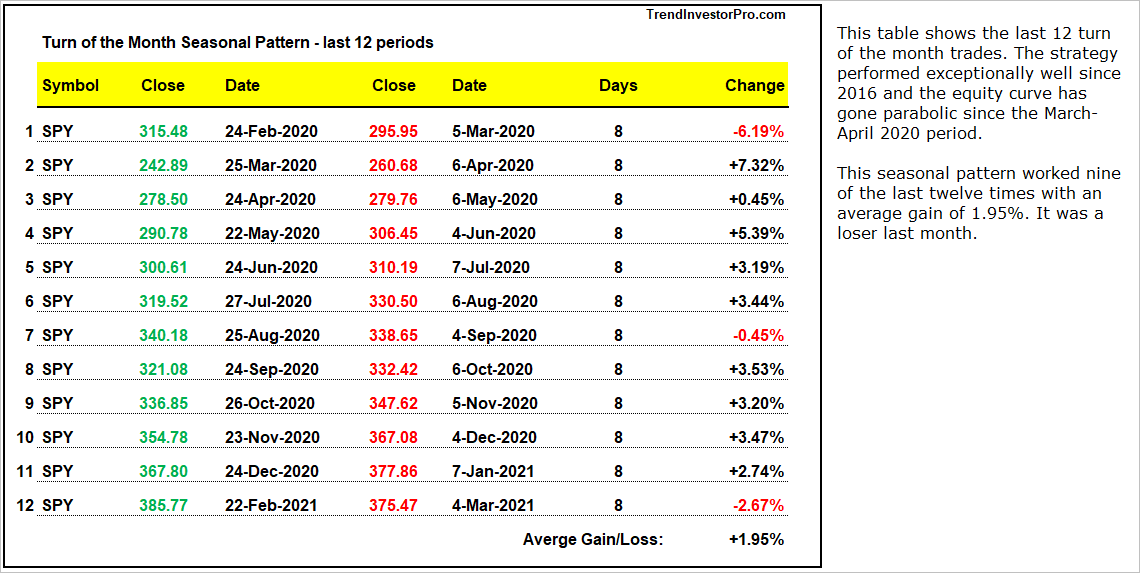 Details on the Turn of the Month seasonal pattern can be found in this article.

We never know how long a seasonal pattern will bear fruit or when it will stop working. The equity curve for this strategy is in a clear uptrend and there are no signs that it has stopped working. Also keep in mind that the 8-day Rate-of-Change is negative around 1/3 of the time. Thus, it works 2/3 of the time on average.

Note that I also tested this by buying and selling the next open. The results are also quite positive: 66% win rate, average gain 2.2% and average loss 2.32%. The Compound Annual Return (CAR) was 7.14%.

I am sure there is a good narrative for why this works more often than it doesn’t. These include end-of-month window dressing, new money going to work at the beginning of the month and traders acting on these tendencies. Personally, I think narratives do more harm than good because they can bias our analysis. Sure, we all like a good story and we all want to make sense of the markets. However, there is a lot of nonsense in the financial press and we are usually better off sticking with the data and the charts. As Joe Friday would say: just the facts.

The second bullish seasonal pattern indicates that April has been the strongest month of the year over the last twenty years. The chart below shows that the S&P 500 closed higher 79% of the time in April and the average gains was 2.3%. May also has a pretty positive bias because it closed higher 68% of the time. Thus, we are heading into a seasonal period that is quite bullish. 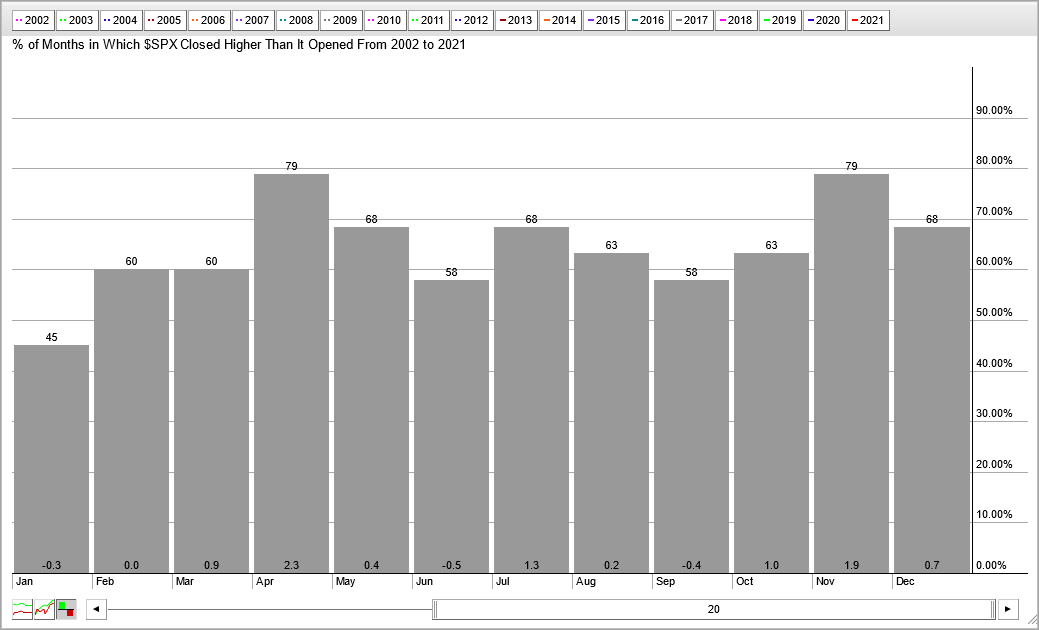 Details on monthly and weekly seasonal patterns can be found in this article.

The long-term trends are up for SPY, QQQ and IWM. Recent pullbacks (QQQ) and choppy trading (IWM) are viewed as corrections within bigger uptrends. With the big trends still up and bullish seasonal patterns coming into play, the short-term flag breakouts could get a boost. The short-term trends are up for SPY and QQQ as both broke out of falling flag patterns and these breakouts are holding. SPY is just above the breakout zone with the line in the sand at 384. QQQ is at its moment of truth with the line in the sand at 310. Closes below these levels would negate the breakouts and call for a re-evaluation. 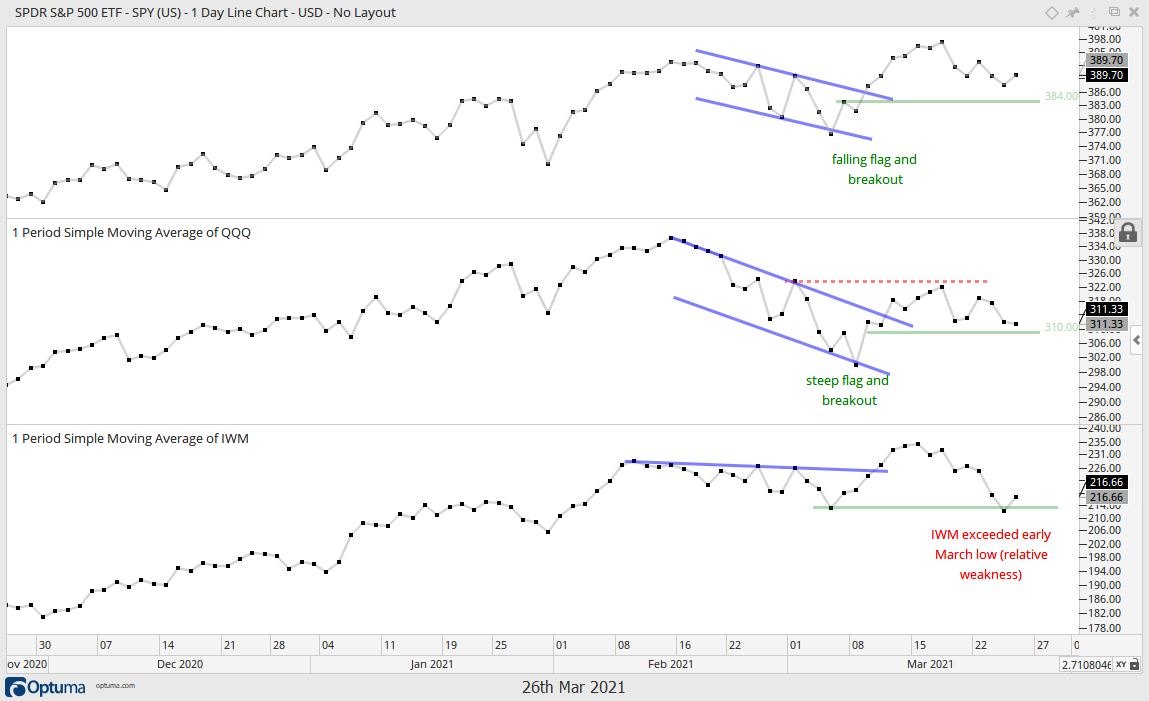 The chart below shows three timeframes for QQQ. QQQ is important to watch because it sets the tone for the rest of the tech sector and growth stocks, which have been lagging lately. QQQ broke the early and late January lows on the way down and did not exceed the early March high on the rebound. This showed relative weakness overall. However, we are now seeing a little relative strength during the recent pullback (6-7 days) because QQQ did not come close to the 8-March low (noted above). 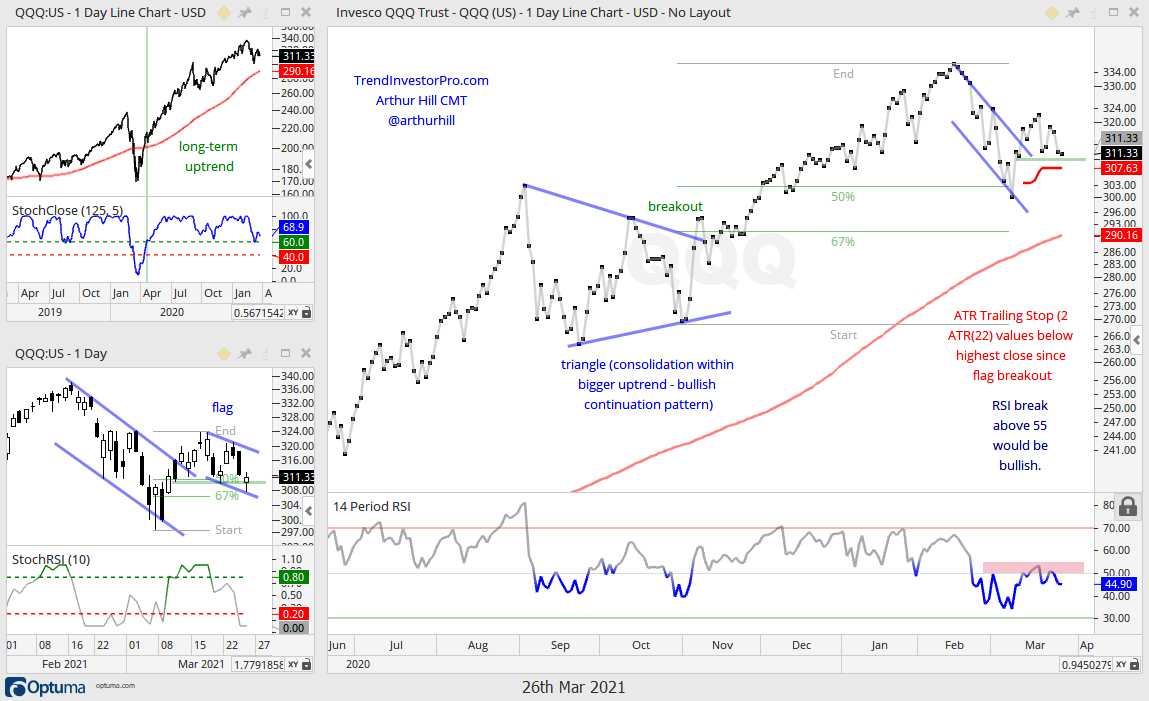 The candlestick chart in the lower left gets even more granular by focusing on the pullback since mid March, which could be a bull flag. QQQ broke out of the bigger flag and then fell back to the breakout zone by retracing 50-67% of the breakout advance. The breakout zone and key retracement mark a potential reversal zone and a breakout at 320 would be bullish. For bottom pickers, the reward-risk ratio is quite good here. My line is the sane is a close below 310 and the ATR Trailing Stop is at 307.63

The Composite Breadth Model defines the market regime and remains in bull market mode with all five inputs bullish.

Declines and consolidations are considered corrections within the bigger uptrend as long as the Composite Breadth Model is net bullish. Note that this model is designed to absorb corrections and not turn bearish until the weight of the evidence is bearish.

You can learn more about the methodology and
historical performance for these breadth models in this article. 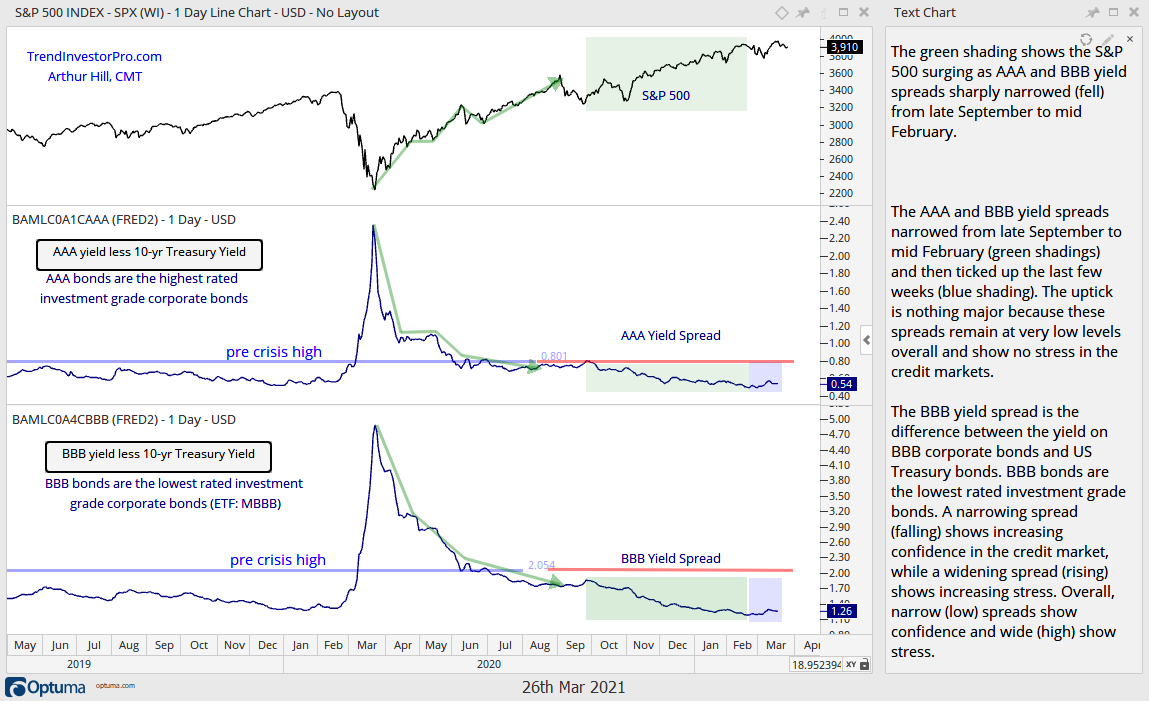 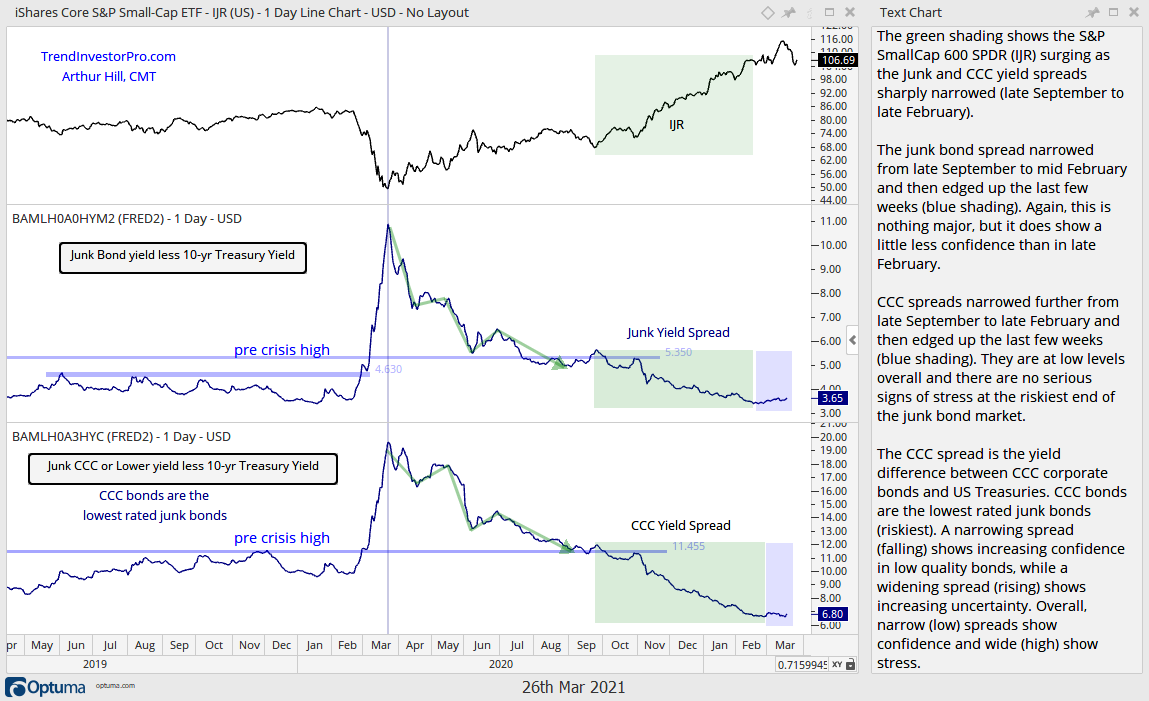 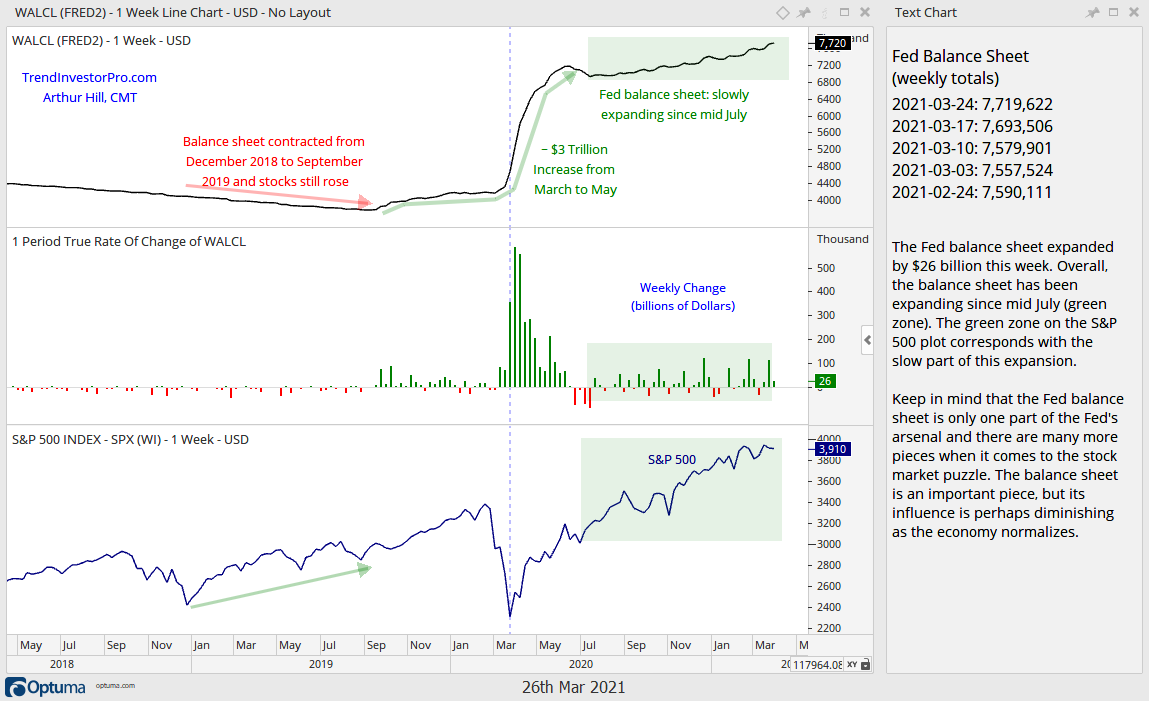