Studying Past Shocks for Clues on the Future 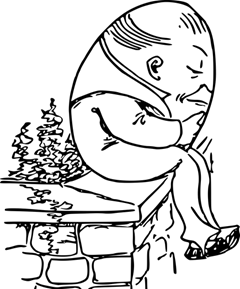 As technical analysts and chartists, we study historical prices and patterns to get an idea of what to expect going forward. No two patterns are exactly the same, but they often rhyme with a few common characteristics. Today will look at this week’s two-day decline and compare it to prior declines of this magnitude. This decline did not derail the bull market, but we can expect a choppy trading environment for at least a month.

Note that I am not going to weigh in on the coronavirus, the elections or any other probable causes. According to the chart evidence, the market was poised for a correction before this week’s decline. Humpty Dumpty was already sitting on the wall. Perhaps the news flow exasperated the decline, but the evidence continued to build and this week’s decline signals that the correction has finally started in the S&P 500. Nobody knows how far it will extend, how long it will last or what shape it will take. The best we can do is take it one day or week at a time. Plan your trading/investment and trade/invest according to that plan.

The S&P 500 moved over five percent in two days and this was the thirteenth such occurrence in the last ten years. As the chart below shows, there were ten two-day declines greater than 5% and three advances. Even though there were 10 such declines, note that five were clustered around August-October 2011. The other five were spread out from summer 2015 until now. The red vertical lines mark the initial two-day decline in excess of 5% and the blue zones mark periods of choppy trading, which we will explore further. 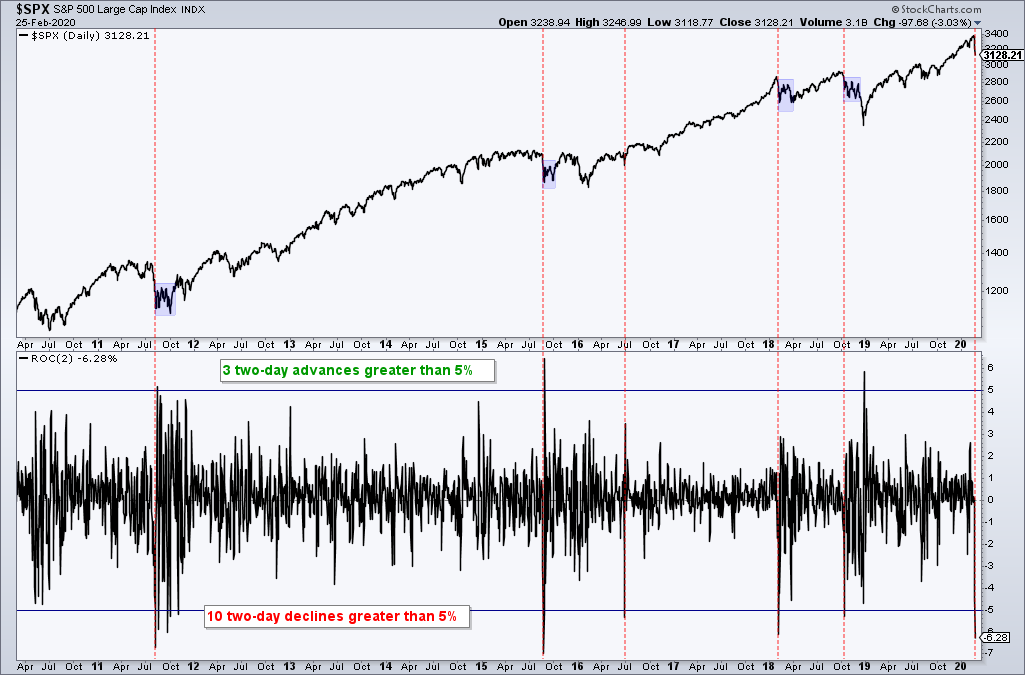 While the average number of outsized moves may seem high over the last twenty years, keep in mind that most occurred in 2002 and 2008. Thanks to Charlie Bilello (@charliebilello) for this insight. The last third of the 2001-2002 bear market witnessed some serious volatility, but the 2008 bear market took volatility to a new level. There were big moves up and big moves down because bear market rallies will take your head off (if you are short). 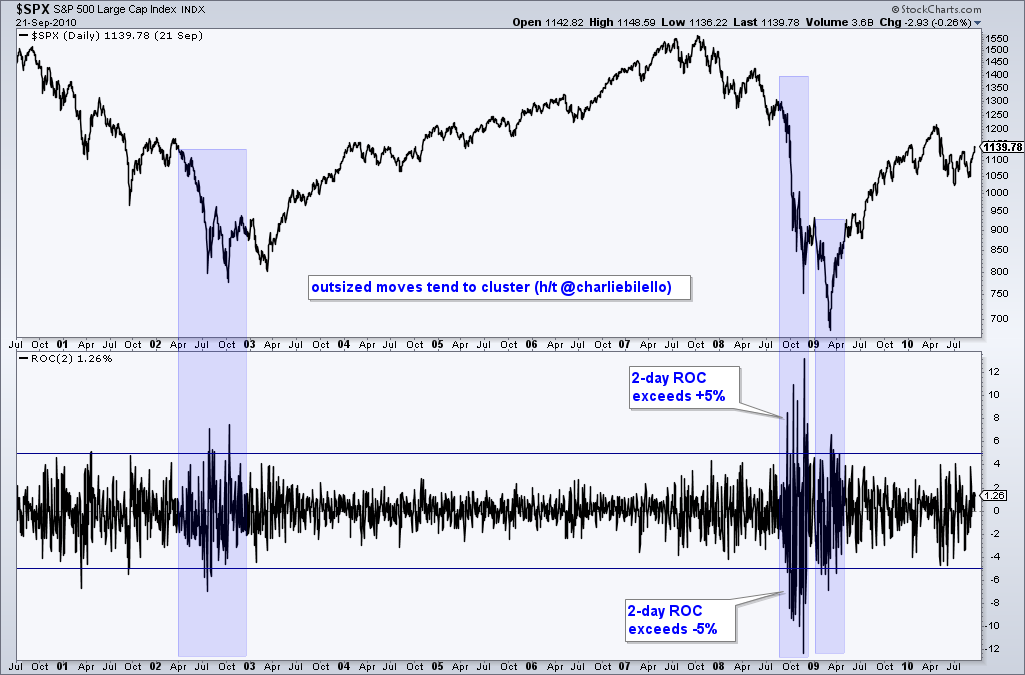 2011 and the Golden Pullback

Let’s now look at the five initial instances when the S&P 500 fell over 5% in two days (over the last ten years). The first occurred in August 2011 when the S&P 500 fell over 10% in two weeks from late July to early August. After this double-digit decline, the index then fell over 6% in one day, and over 5% in two days, which goes without saying. The index then proceeded to trade in a choppy and volatile manner for over 40 days (and nights). First takeaway: it takes time to recover after sudden and sharp declines. 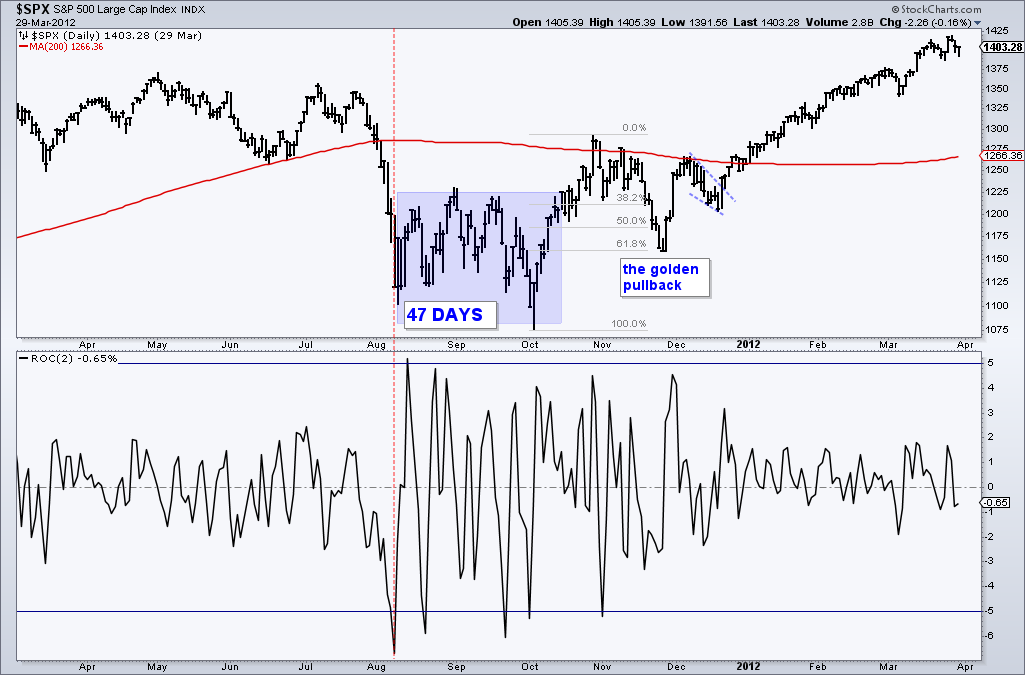 There is one more takeaway here. Notice how the index broke above the prior highs with a surge in October, and even exceeded the 200-day SMA. This was bullish price action, but one still needed to allow leeway for a correction or pullback. Chartists with patience would have been rewarded with a text-book 61.8% retracement and surge in late November. Even if you missed the late November breakout because of a Thanksgiving food coma, there was another setup in December with a falling flag/pennant. The breakout occurred on December 20th, just before the next food coma.

The next outsized two-day decline occurred in August 2015, some four years later. The S&P 500 fell over 5% in two days and then fell another 4% the next day. This is when several dozen ETFs spiked lower intraday and were down over 20% at one point on August 24th (#tradingglitch). Overall, the S&P 500 fell over 10% in six days, and it then took another 34 trading days to stabilize. 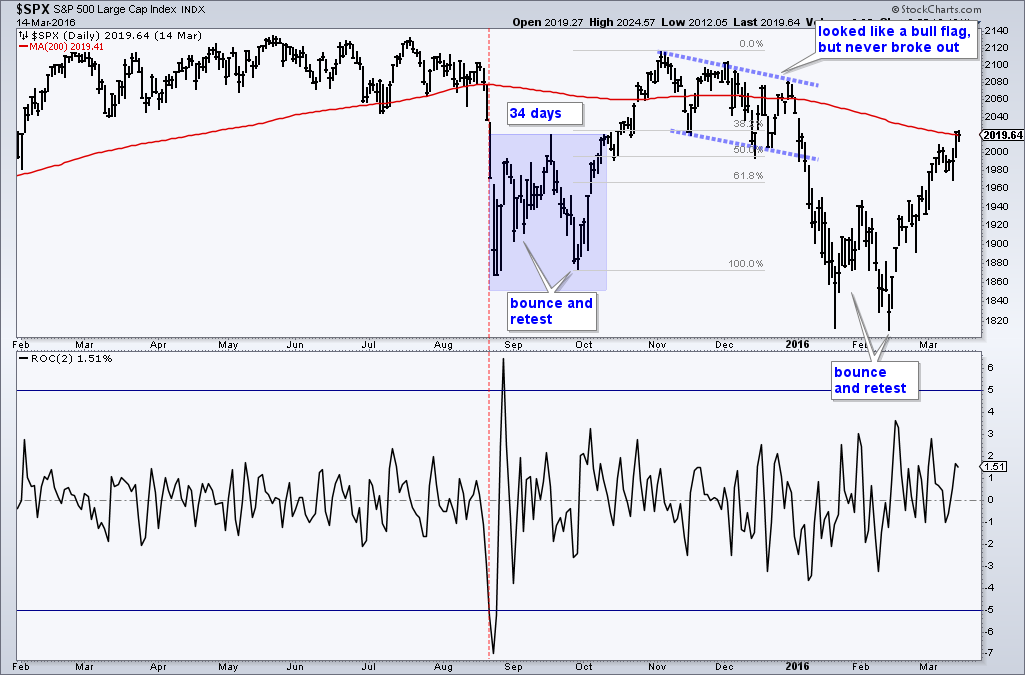 2016 and the Golden Pullback

The S&P 500 fell over 5% in two days in late June 2016, after the surprise results of the Brexit vote. Yeah, remember that vote. The index broke its 200-day SMA, but immediately rebounded and surged to new highs in July. Chartists who missed this bear trap and breakout got another chance as the index retraced around 61.8% with a pullback to the rising 200-day SMA. A 50-61.8% retracement after a breakout is my preferred setup, especially when the S&P 500 is above or near its 200-day SMA. 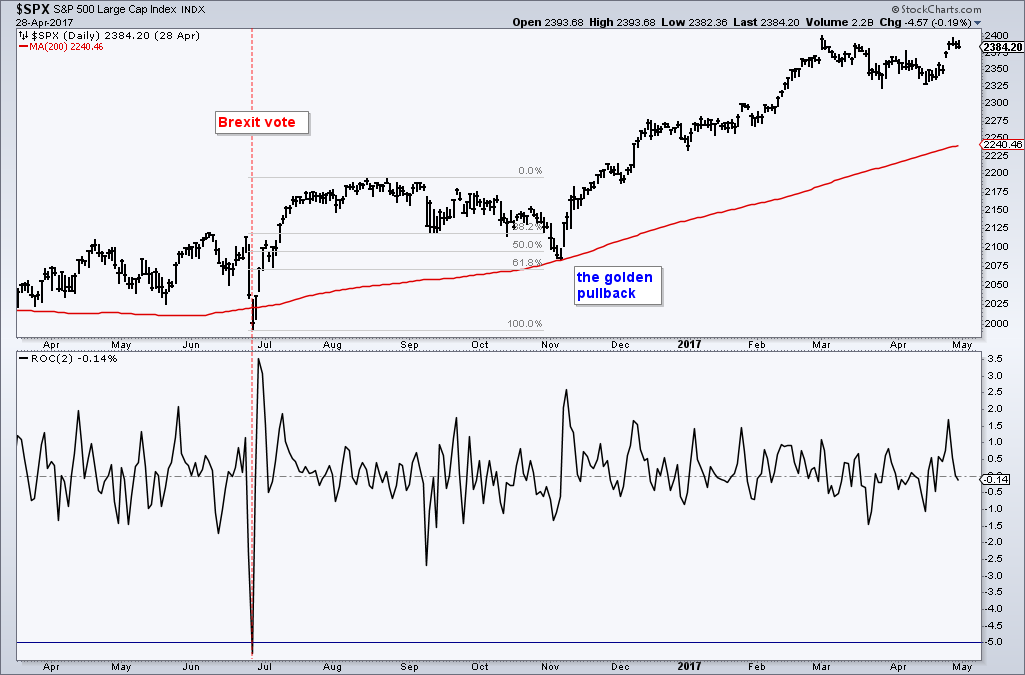 Working off the Excess in 2018

The next outsized decline occurred in January 2018 and this marked the beginning of a volatile correction into April. With the January 26th close, the S&P 500 was up over 7% for the month and some 14% above its rising 200-day SMA. The index was also up some 18% since mid August and ripe for a corrective period. The two-day decline in excess of 6% signaled the start of this corrective period, which lasted at least forty days.  Notice that there was a serious bounce back above 2800, but the index again tested the February low and 200-day SMA in late March/early April. 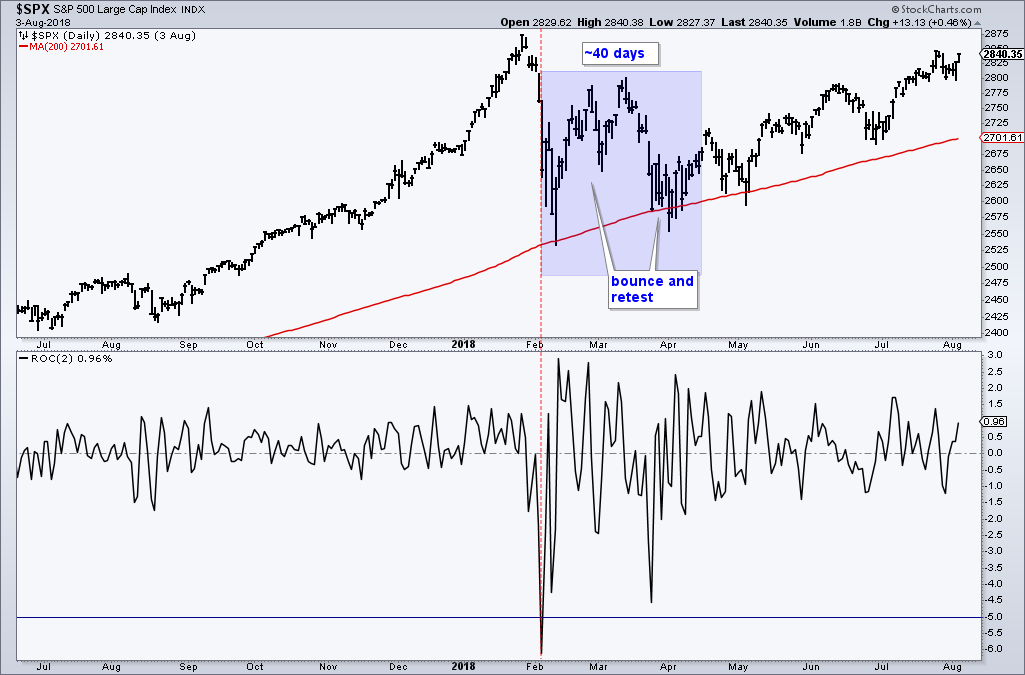 The sharp decline in early February 2018 also shows us that the market can move even without a significant news event. A check through the news suggest that an “inflation” scare prompted the February 2018 decline. I’ll call BS on this one because I doubt if anyone can even remember the events of February 2018. In any case, file the news and focus on the chart (h/t Ed Seykota and the Whipsaw song).

There were two 5+ percent declines in 2018 with the second occurring in October. After hitting a new high, the index fell sharply with a move below the 200-day SMA. There as a small bounce in mid October and then another sharp move lower in the second half of the month. The index did get a decent oversold bounce and this bounce failed near the 61.8% retracement in mid November (another golden bounce). Overall, a triangle took shape and this was a bearish continuation pattern. The mid December break signaled a continuation lower and the index plunged to new lows. 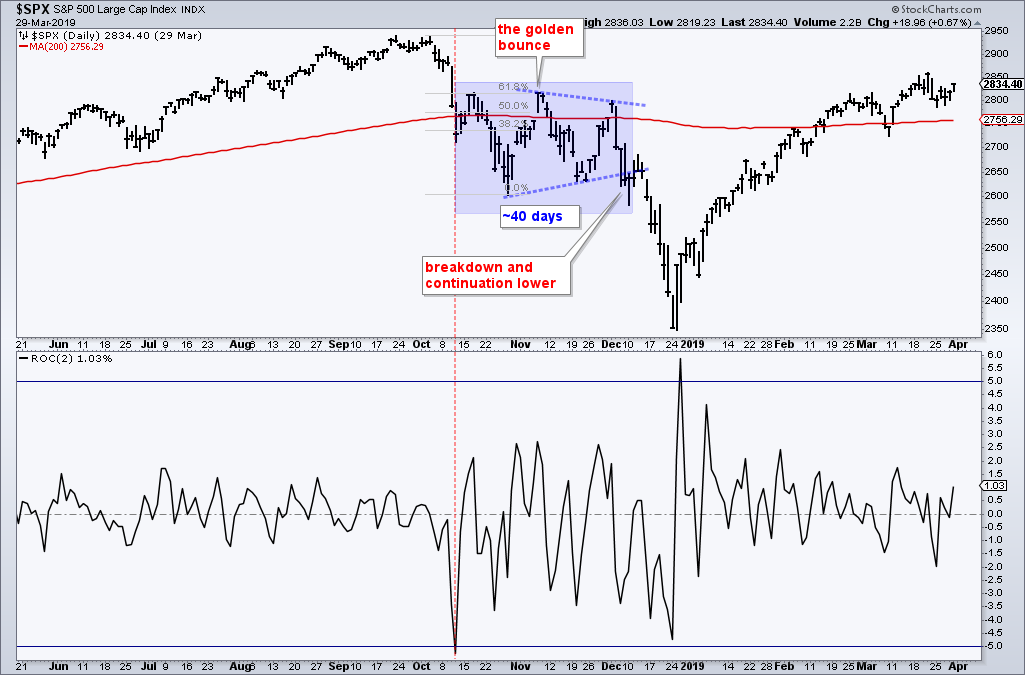 Now let’s look at the daily chart for SPY. The ETF fell over 7% in four days and 14-day RSI moved below 30. The combination created the most oversold condition since early August, and prepares the way for a bounce. A 50-61.8% retracement of the prior decline would carry SPY back to the 325-328 area. This area coincides with Monday’s gap. 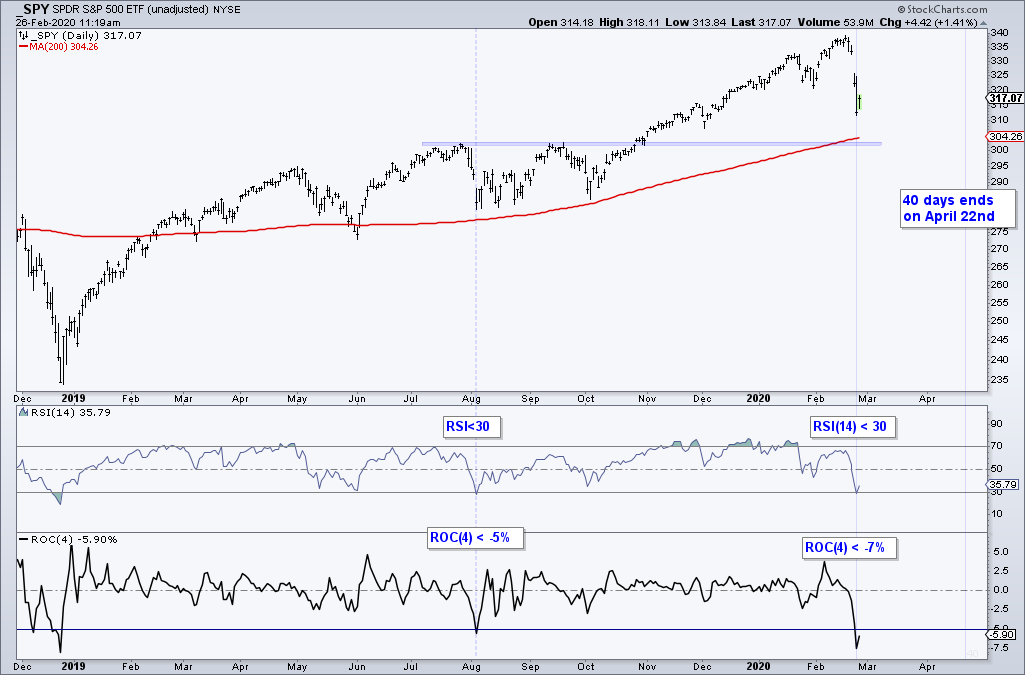 Even though a mean-reversion bounce looks likely at this stage, I do not think this correction has run its course.  Corrections take time and this correction is just five days old, at least for SPY. Keep in mind that the Russell 2000 ETF and S&P MidCap 400 SPDR peaked in mid January and have been correcting for at least five weeks already.

Thanks for tuning in