It’s just the second trading day of 2020 and already the markets are setting up for a test. Stock futures are sharply lower as the S&P 500 looks set to open down around 1%. Gold, the Dollar and Treasury bonds are sharply higher as money looks for alternatives. A sharp decline in the S&P 500 could reverse the short-term uptrend and herald the much awaited correction. A sharp advance in gold would not change anything because gold broke out on December 24th. A big gain in the 20+ Yr Treasury Bond ETF (TLT) could foreshadow a bigger wedge breakout as the bond ETF managed to reverse above its November low and rising 200-day SMA.

The market’s reaction to geopolitical events is noise. Tariffs, Fed statements, inverted yield curves and such make headlines, but we cannot quantify these and use them for investing decisions. The underlying trends, patterns and setups are far more important. Do you want 2020 vision in 2020? Tune out the noise and tune in the charts. Price is the only thing that matters.

Let’s start with the S&P 500 and recap the comparison with January 2018. I am using the 1-day Rate-of-Change to measure outsized moves, 2-day Average True Range to measure short-term volatility and the %Above 20-day EMA to measure participation. An outsized decline (greater than 1%) and uptick in volatility (>30) could signal the start of a correction. On the chart below, we can see how the advance in January 2018 ended with the biggest one-day gain in over three months (blow off top) and a subsequent 1% decline two days later (outsized decline). ATR(2) moved above 30 (volatility uptick) and %Above 20-day EMA moved below 50% (breadth signal) four days later. 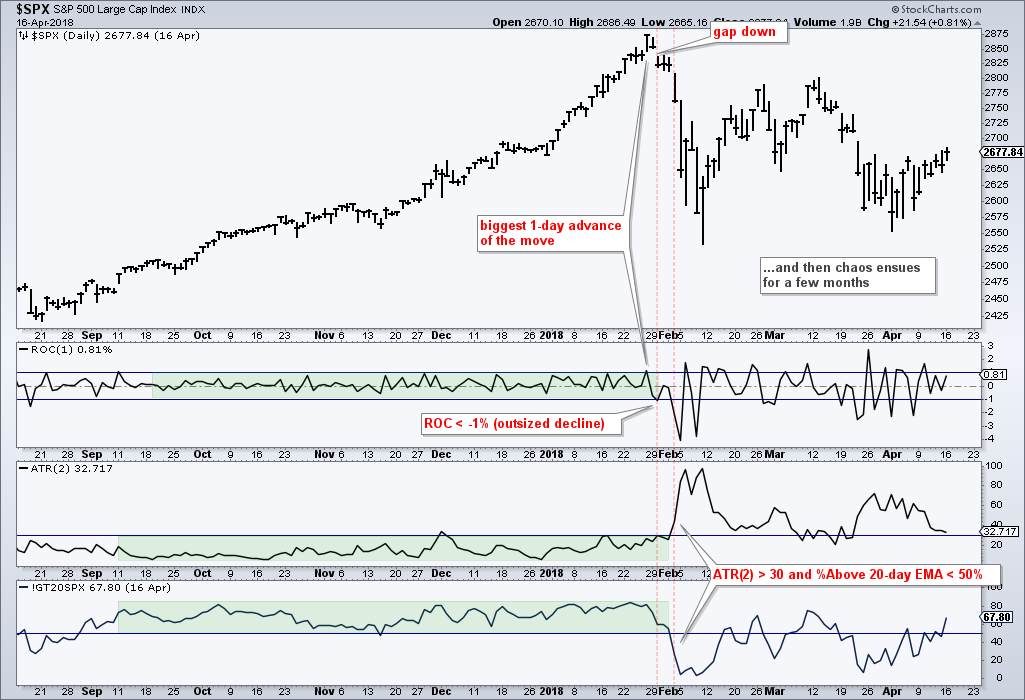 On the current chart, ROC(1) has been between -1% and +1% since mid October. This shows a relative tame advance without any outsized move. ATR(2) moved above 30 and %Above 20-day EMA moved below 50% on December 3rd, but both reversed and moved back into bull mode the very next day. The indicators are currently bullish and we have yet to get a short-term bearish signal. This could change today, but let’s cross that bridge when/if it gets here. 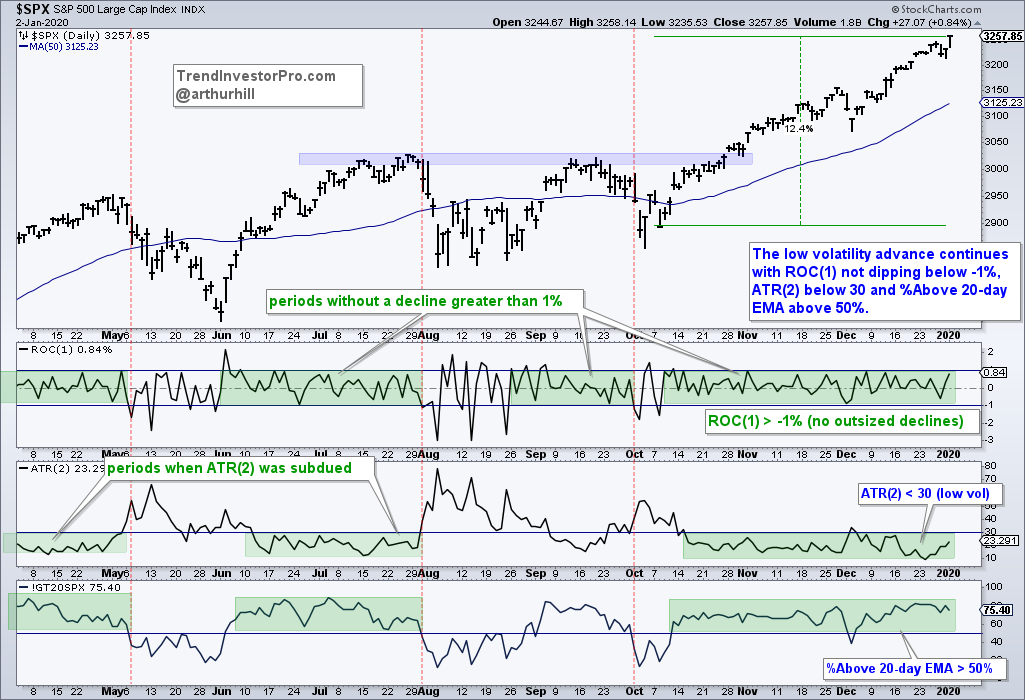 The next chart shows weekly bars for the unadjusted 20+ Yr Treasury Bond ETF (_TLT). After a 30+ percent surge and some extremely overbought conditions in late August, the ETF fell back to its rising 40-week SMA the last four months. TLT has been the second worst performing ETF in the core list over the last 18 weeks (-6.82%). MJ is the biggest loser with a 29% decline. The advance in stocks (risk assets) over the last four months came at the expense of bonds (safe haven assets).

Even though TLT is lagging the last four months, the chart looks constructive and the ETF could be poised to put in an important low. Notice how TLT is finding support near broken resistance and the November low (green zone). In addition, the falling wedge decline retraced 50% of the prior surge. This 31.9% surge is two steps forward and the 50% decline is one step backward. TLT firmed the last two weeks and a sharp bounce from here could lead to a significant breakout.

I am not going to start marking support levels to watch going forward because there are no signs that a pullback is starting or a reversal is in the making. I could mark broken resistance as the first support level in the 302 area or use the rising 40-week SMA to mark, but these levels are still quite far away so it does not make sense right now.

Going back again, notice how it took the index some 15 weeks to stabilize after the parabolic move. In addition, the rising 40-week SMA held in early 2018 when SPY corrected. Yes, the index pierced this SMA at least seven times and even closed below it twice (on a weekly basis). This SMA and support levels are not exact and should be treated more as zones to watch on pullbacks, should we get one in the coming weeks or months.

Gold and bonds have been on the same page since October 2018 (positive correlation). Both surged some 30% from October 2018 to September 2019 and then fell the last four months. The Gold SPDR (GLD) broke out ahead of TLT and sports a stronger price chart. Notice that GLD retraced less than TLT  on the pullback (38% vs 50%) and held well above the 40-week SMA.  Furthermore, GLD broke out and the PPO moved above its signal line last week. This breakout signals an end to the correction and a resumption of the bigger uptrend. 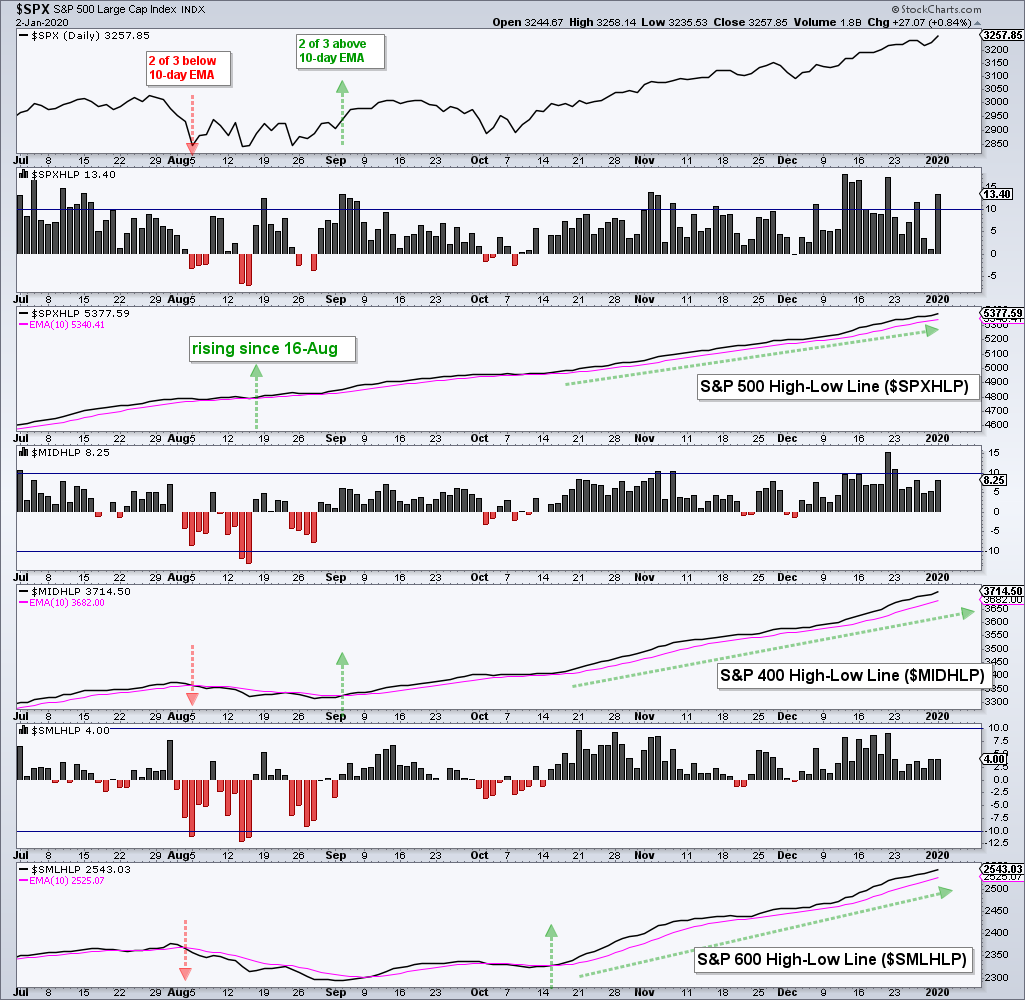 The Sector Breadth Model captures the breadth signals for the 11 sectors in the S&P 500, which makes it specific to that index. I use it because the S&P 500 is the single most important benchmark for the stock market. Nothing is safe when the S&P 500 breaks down. Currently, all eleven sectors are net bullish and 32 of the 33 indicators are on active bullish signals. XLE High-Low% ($XLEHLP) is the only indicator that remains with an active bearish signal.

I mostly focus on the top six sectors because they account for 79.57% of the S&P 500 (Technology, Healthcare, Finance, Consumer Discretionary, Communication Services and Industrials). The trouble starts when breadth indicators for these sectors start triggering bearish. Technology and Healthcare have been net bullish since February 1st. Finance, Consumer Discretionary and Industrials have been net bullish since September 6th. Thus, the Sector Breadth Model has been firmly bullish since early September and caught a big advance the last four months. This model will not turn bearish until we see the majority of indicators in the top six sectors trigger bearish signals. 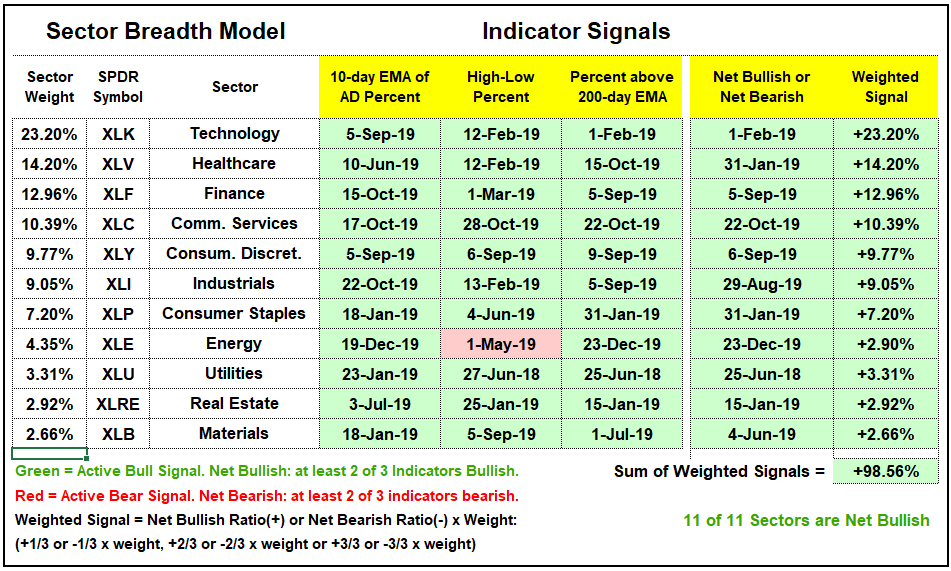 The next chart shows the High-Low Lines for the six biggest sectors. Note that I use a 20-day EMA instead of a 10-day EMA because the sectors have fewer stocks than an index and are much less diversified. Technology remains king because its High-Low Line has been rising since late January. The Industrials and Finance High-Low Lines are not far behind because they have been rising since February. Consumer Discretionary turned up in early September and this meant four of the big six High-Lows Line have been rising for four months now.. 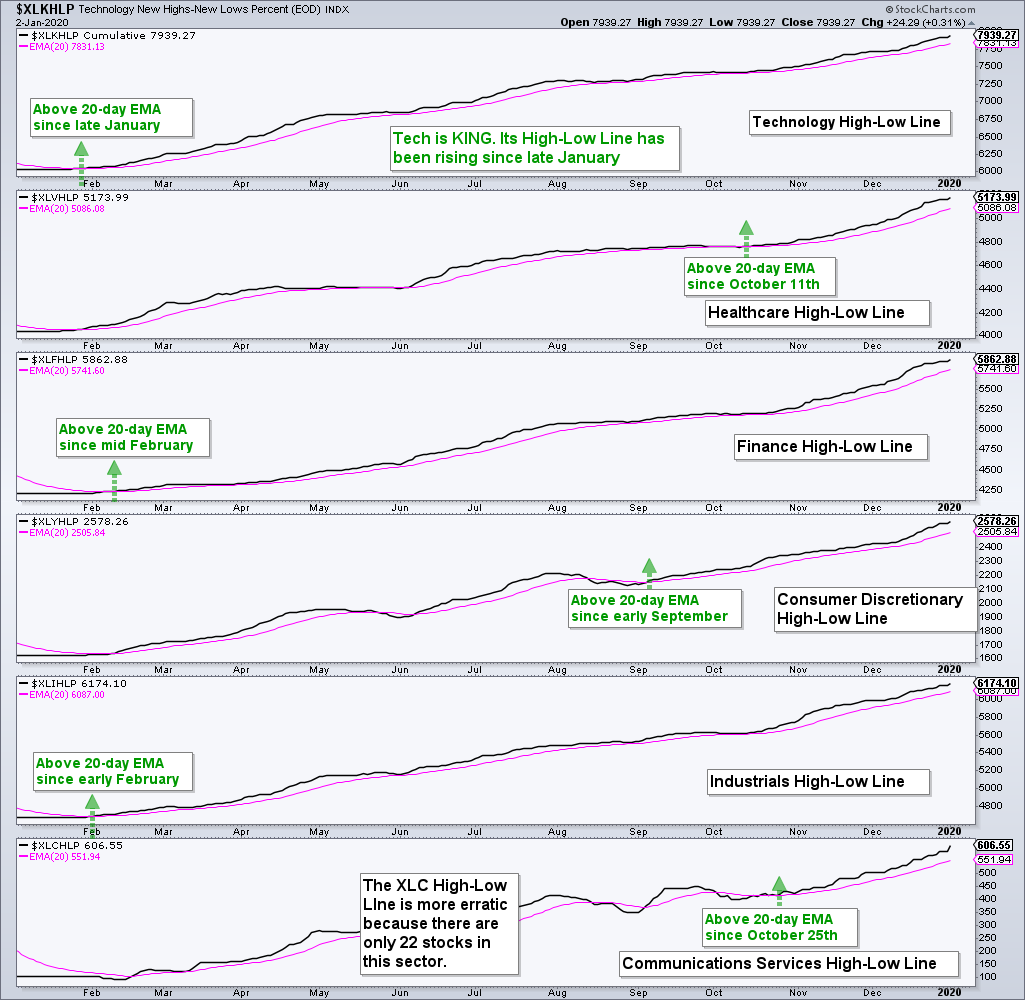 There was an interesting discrepancy with the Fed balance sheet last week. The System Open Market Account (SOMA) decreased, while Total Assets on the Fed’s Balance sheet increased slightly. I am not going to dive into the specifics of the Fed balance sheet for two reasons. First, and foremost, I am not a specialist on the Fed. Second, I am looking at the big picture and one week is not enough to change the bigger picture. Further decreases in SOMA and a downturn in Total Assets would turn this “Fed” indicator negative. 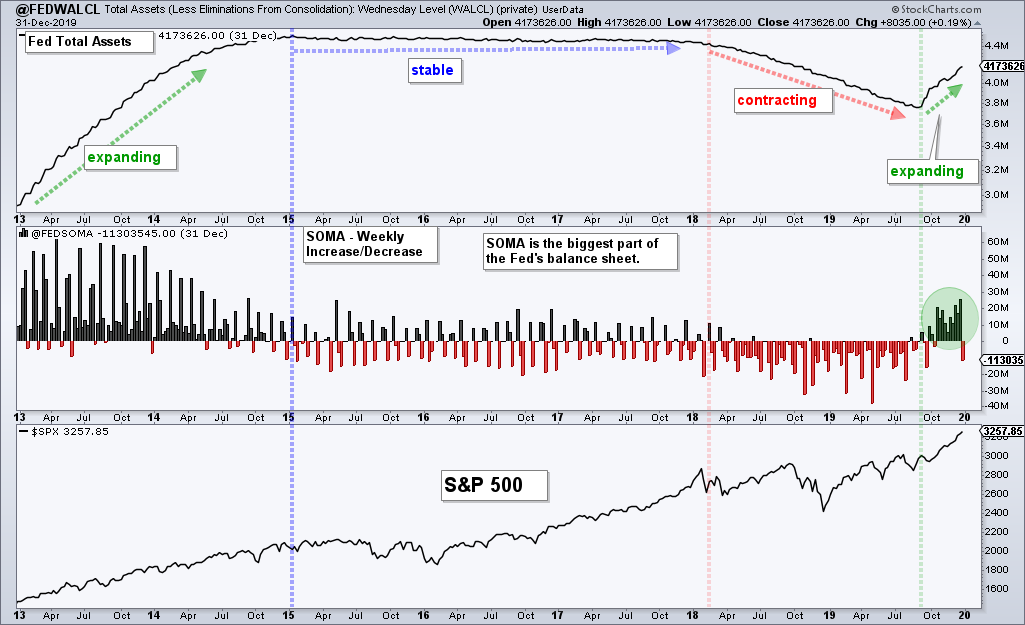 Stocks are setting up for a short-term test, but even an outsized decline in the S&P 500 today would not be enough to affect the medium-term or long-term indicators. Medium-term, I will be watching the High-Low Lines. Long-term, I will cue off the breadth models. The key High-Low Lines are rising and the breadth models remain unequivocally bullish. In addition, the 20-day SMA for the S&P 500 is above the 200-day SMA. Let’s not get caught up in the short-term noise until we see some medium-term signals.

The inverse relationship between stocks and bonds/gold has been in play since October 2018 and remains in play. I do not want to read too much into the breakout in gold. It is bullish for gold, but I do not want to suggest it is bearish for stocks. Note that stocks, gold, bonds, oil, the Dollar and REITs were all up in 2019. Nevertheless, I think a breakout in TLT and uptrend in GLD would signal some risk-aversion in the markets and this could be negative for stocks. So, I will be watching TLT closely in the coming weeks.