The major index ETFs extended their breakouts as the bullish forces, which were highlighted last week, dominate heading into year end. Three of three technical forces remain bullish. Two of the three “other” forces turned from rumor to news this week. Boris Johnson and the conservatives won handily in the UK elections, while China and the US reached a deal just before the December 15th deadline. I do not view this news as bullish or bearish for stocks. The move from rumor to news simply lifts an uncertainty that was hanging over the market. Ratification of USMCA is the third force that remains in play.

Even though I mentioned these fundamental forces last week, the technical forces are what really drive my market stance. The tape and trend are clearly bullish with new highs in several key index ETFs, sectors and industry group ETFs. The Index and Sector Breadth models also remain bullish. Seasonally, we are in a bullish period of the year and a bullish half of the month (December and the second half of December). Although not exactly technical, the Fed balance sheet continues to expand and this is positive.

Today we will look at the new highs in several key sectors. I am not talking about just the sector SPDRs, but rather the equal-weight and small-cap sectors. We will also look at the expansion in new highs in the S&P 500 and highlight the sectors with the most new highs. I will rank the sectors by the percentage of stocks above the 200-day EMA. And, as usual, we will close with an update on the Fed’s balance sheet.

Last week we focused on the big weekly chart breakouts in the Russell 2000 ETF and S&P MidCap 400 SPDR. These breakouts followed the Ascending Triangle breakout in the S&P 500 SPDR and the Triangle breakout in the Nasdaq 100 ETF. The chart below updates the breakouts in SPY, MDY and IWM with a simple line chart. All three recorded 52-week highs this week and all three are in clear uptrends. We can debate short-term overbought conditions, but there is no debate on the underlying trend. Overall, we have ETFs related to large-caps, large-techs, equal-weights, mid-caps and small-caps hitting new highs. This shows broad strength in the stock market and supports the bull market thesis. 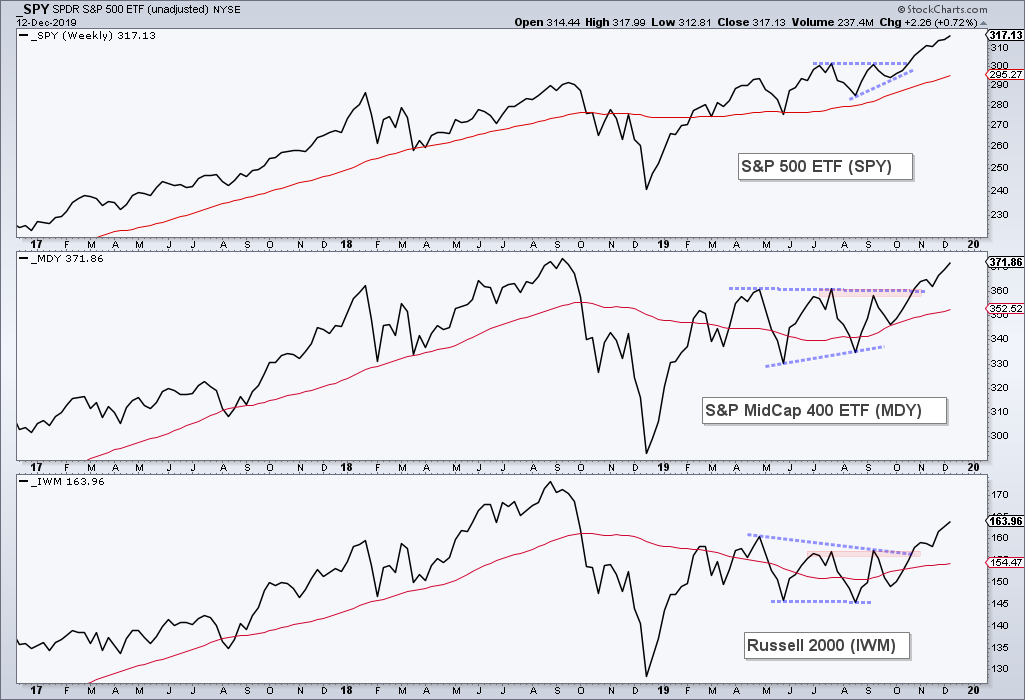 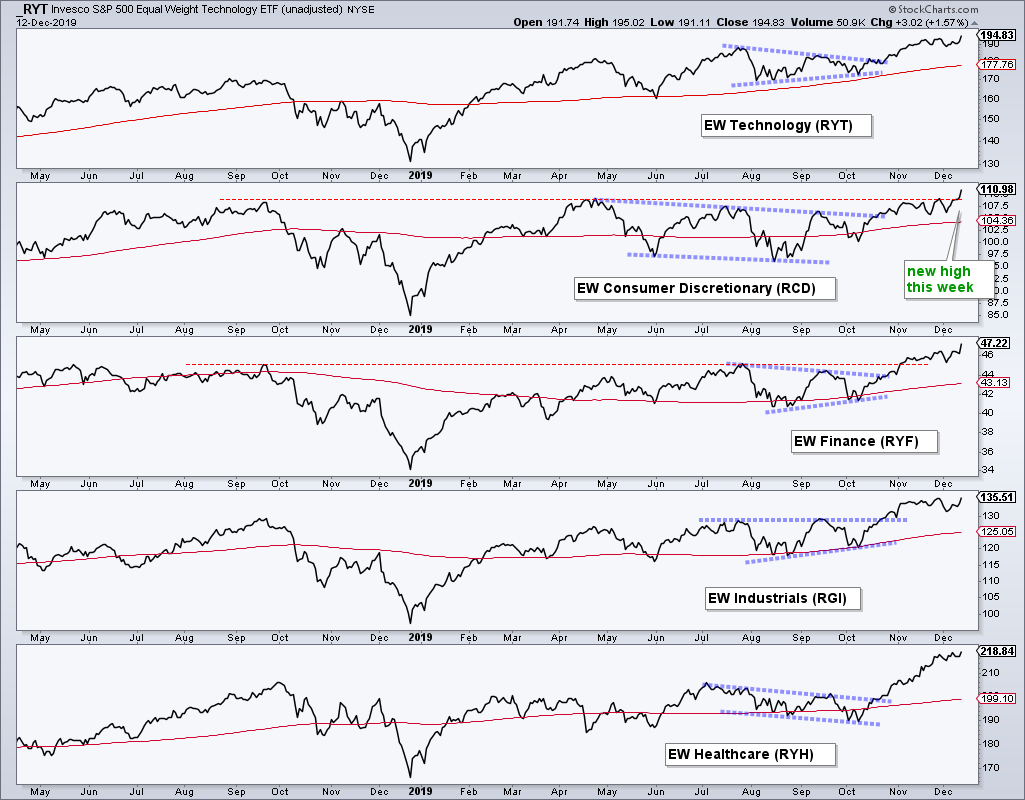 We are also seeing new highs in several key small-cap sectors. The Small-cap Tech ETF (PSCT) recorded a new all time high, while the other four recorded 52-week highs here in December. As with the S&P SmallCap 600 SPDR, the other four sectors are still below their August 2018 highs and this is where the bears will focus. Personally, one year is plenty long-term enough for me and the price charts show clear uptrends (green lines). Note that the Small-cap Tech ETF (PSCT) and Small-cap Healthcare ETF (PSCH) were the first to bottom in early June. 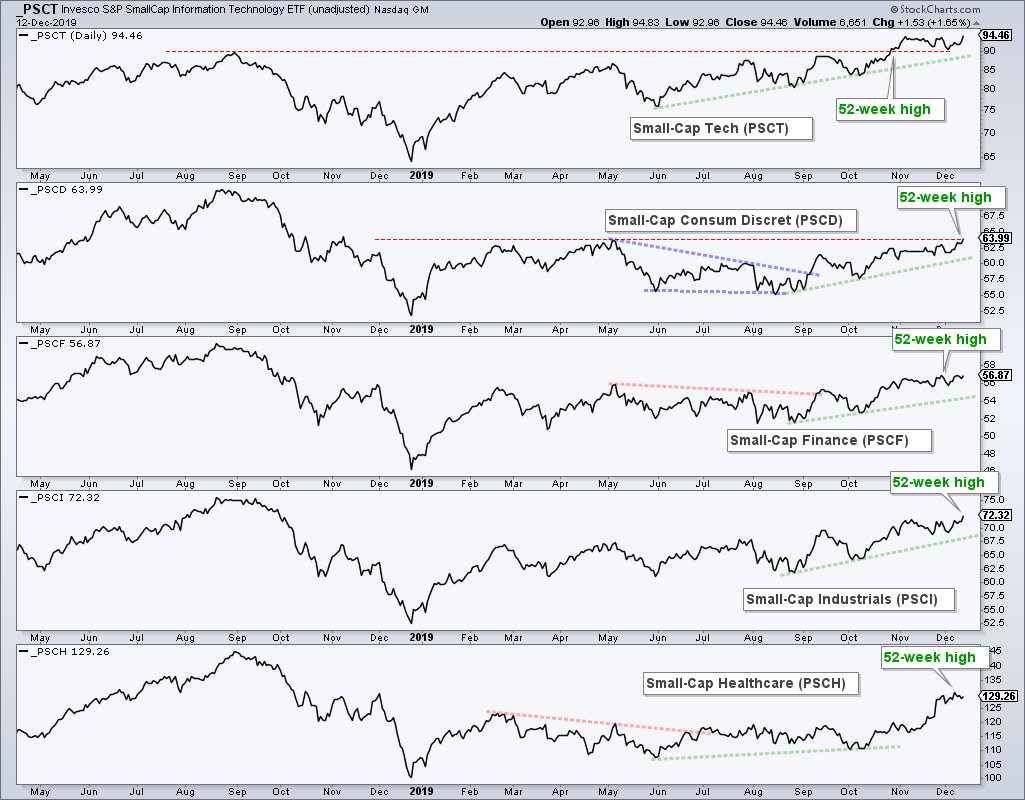 Strength is clearly broadening with new highs expanding in the equal-weight and small-cap sectors. This reinforces the bull market thesis.

Unsurprisingly, there is no change in the Index Breadth Model, which remains bullish with eight of nine indicators on active bullish signals. The S&P SmallCap 600 High-Low% ($SMLHLP) is the only bearish signal and it could be poised to trigger bullish as the bull market broadens.

This week I posted an article and video explaining the indicators and signals in the Index Breadth Model. Click here for details.

There were 90 new highs in the S&P 500 and this is the highest number since June. Stocks hitting new highs are in strong uptrends and leading. Pure and simple. A six month high in new highs confirms that the bull market is broadening with more stocks leading. New highs in the S&P SmallCap 600 and S&P MidCap 400 hit their highest levels since November. I suspect that new highs will expand in mid-caps and small-caps because the Regional Bank ETF (KRE) is up over 6% the last seven days and hit a new high. The financials sector is the largest in MDY (16.5%) and the second largest in IWM (17.6%) and IJR (16.9%). 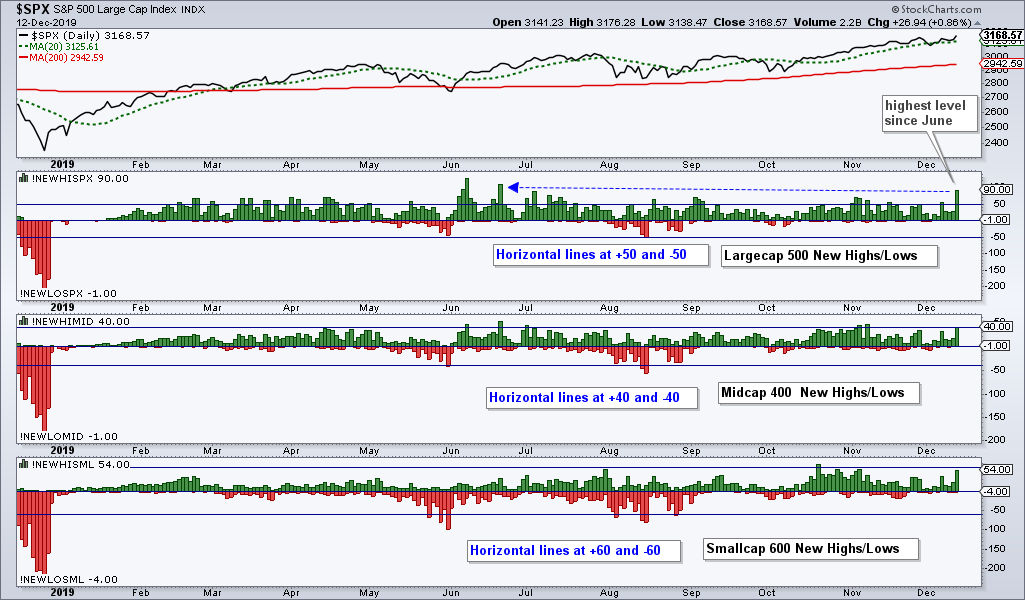 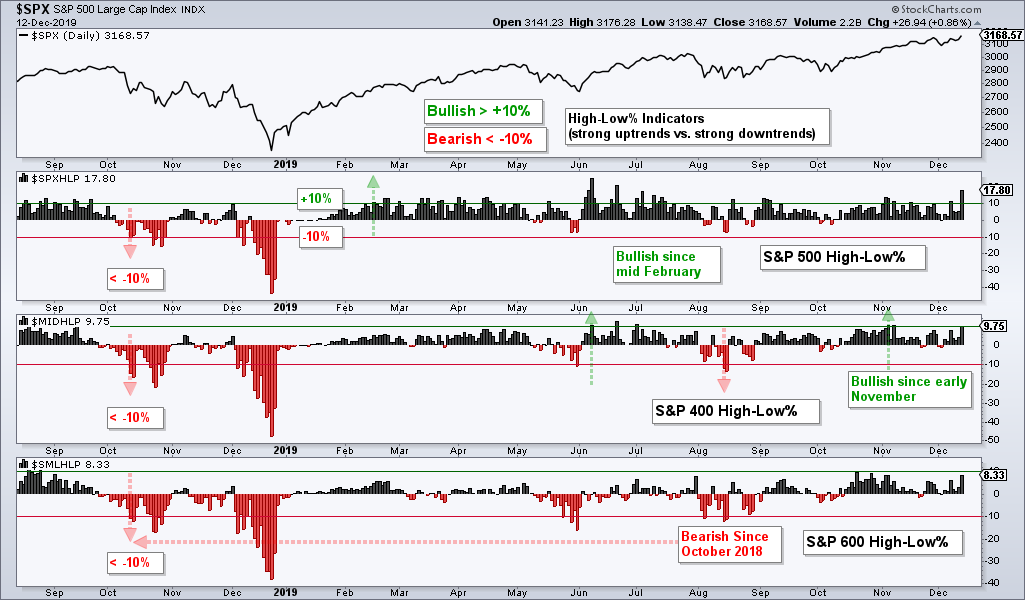 The Sector Breadth Model is also unchanged with ten of eleven sectors on active bullish signals. Energy is the only sector with bearish signals (all three), but even the lowly Energy SPDR is strengthening. Unadjusted XLE (_XLE) is above its 50-day SMA and less than 2% below its 200-day SMA. Even though Real Estate remains net bullish, the ETF is weakening and unadjusted XLRE (_XLRE) closed below its 200-day SMA on Thursday. 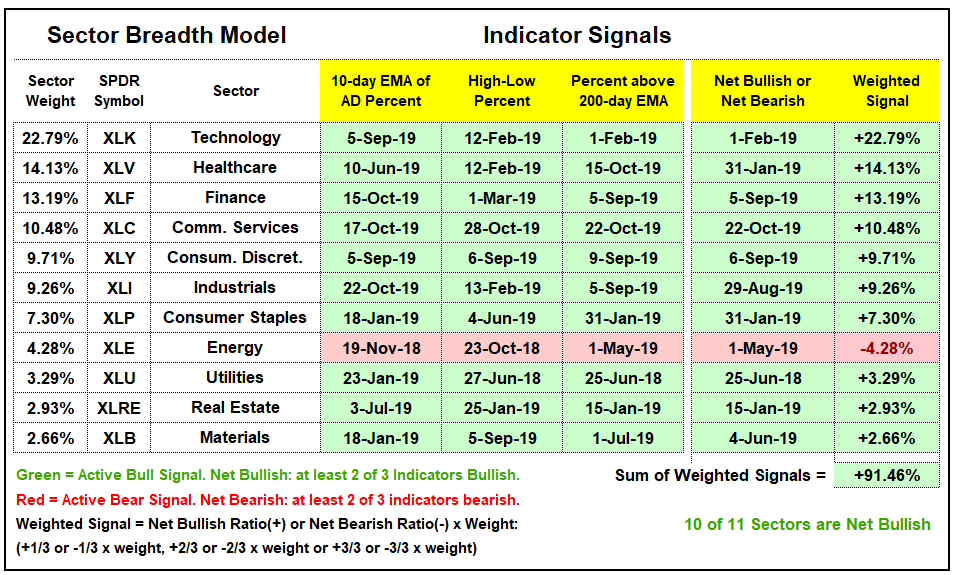 Where are all the new highs coming from? The table below shows High-Low Percent for the eleven sectors and three major indexes. It is sorted by High-Low Percent with the highest values at the top. The “CHG” column shows the absolute change (1 day) in the indicator. For example, Finance High-Low% ($XLFHLP) surged from +12.12% to +44.78% (up 32.65). The reading above 44% is the highest since January 2018 and shows broad strength in the Finance sector. Keep in mind that Finance is the third biggest sector in the S&P 500 and broad strength here is bullish for the stock market. Also note that unadjusted XLF (_XLF) finally exceeded its January 2018 high in December. 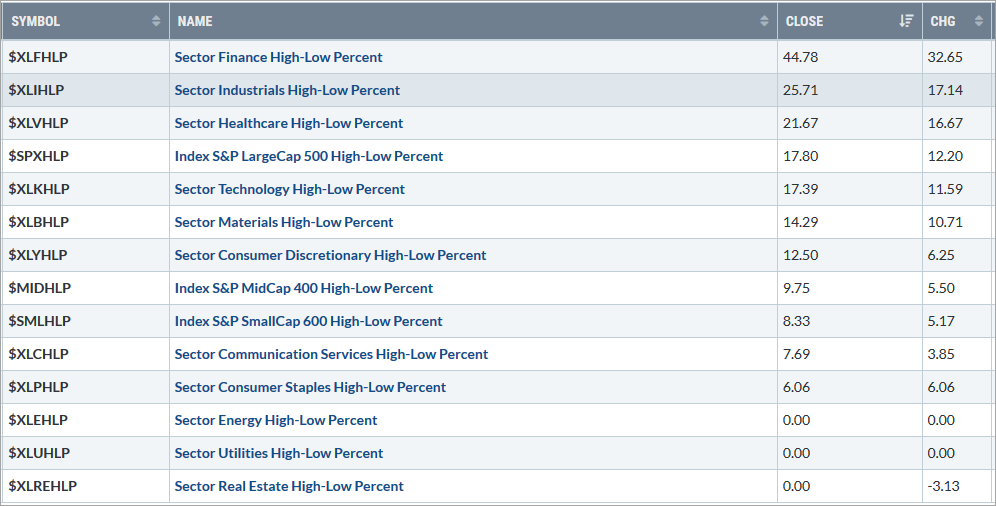 Ranking by Percent Above 200-day EMA 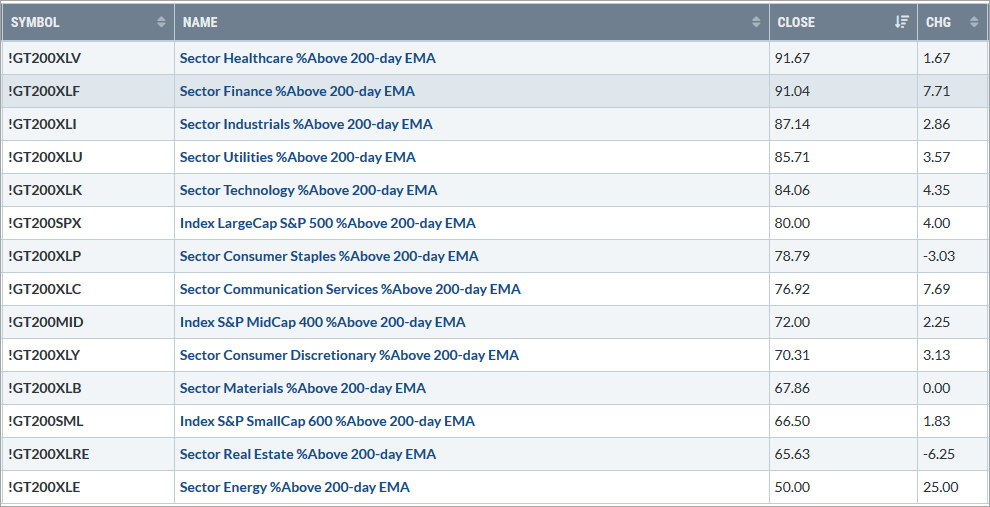 I have no idea what the Fed is thinking or why it does what it does, but assets on the  Fed balance sheet surged again this week and the System Open Market Account (SOMA) increased the most since May 2015. Maybe this is why banks are leading. SOMA increased eight weeks straight and ten of the last eleven weeks. Note that I do not even want to speculate on why the Fed does what it does. The only inference here is that the Fed is providing liquidity to the system and this is net positive for stocks. Don’t fight the Fed. 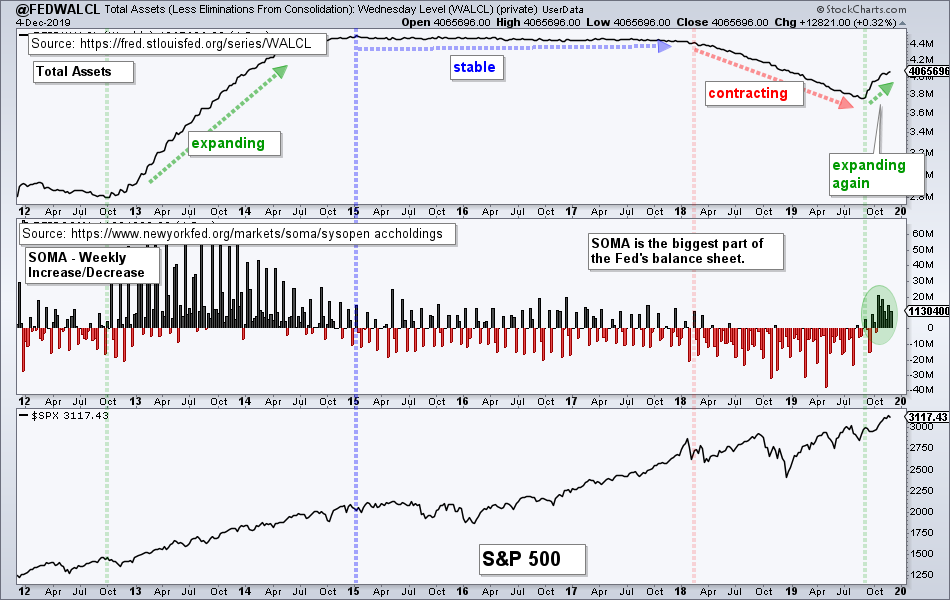 The evidence remains stacked in favor of the bulls as we head into year-end. The tape is clearly bullish with strength in large-caps, mid-caps and small-caps. The bull market is also continuing its broadening process with new highs in several equal-weight and small-cap sectors. In addition, new highs expanded with in the S&P 500.

Seasonal patterns are bullish and we can also add an accommodative Fed to the mix. Thus, we have broad market strength, an expanding Fed balance sheet and bullish seasonal patterns working for the bulls. At the very least, this bullish mix means the dips could be very short as under-invested PM’s step in at the first opportunity.

PrevPreviousGrouping and Ranking Core ETFs – Some Rotation Surfaces as Leaders Pull Back and Laggards Bounce
NextAre you Following the Trend or Waiting for Perfection?Next
Menu
Subscribe
Twitter Youtube Linkedin