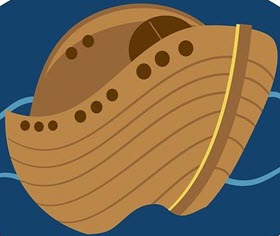 Today’s commentary will focus on three ARK ETFs. Overall, there are eight ARK ETFs that capture cutting-edge technology or innovation in several areas. Six of the eight have been trading for more than three years. The ARK Fintech Innovation ETF (ARKF) started trading in February 2019 and the ARK Space Exploration ETF (ARKX) started trading this week. Check out the Procure Space ETF (UFO) for a chart that extends back to April 2019. Here is a list and a link to the ARK website for more information.

You can learn more about my chart strategy in this article covering the different timeframes, chart settings, StochClose, RSI and StochRSI.

The Bigger they Rise, the Harder they…

The first relative comparison chart shows performance since mid March 2020. Everything at least doubled from March 2020 to February 2021 with the ARK Genomic Revolution, ARK Next Gen Internet and ARK Innovation up 300% or more at one point this year. All seven ETFs accelerated higher from early November to January-February. There was also a second acceleration from early January to mid February and this parabolic move marked a blow-off top. 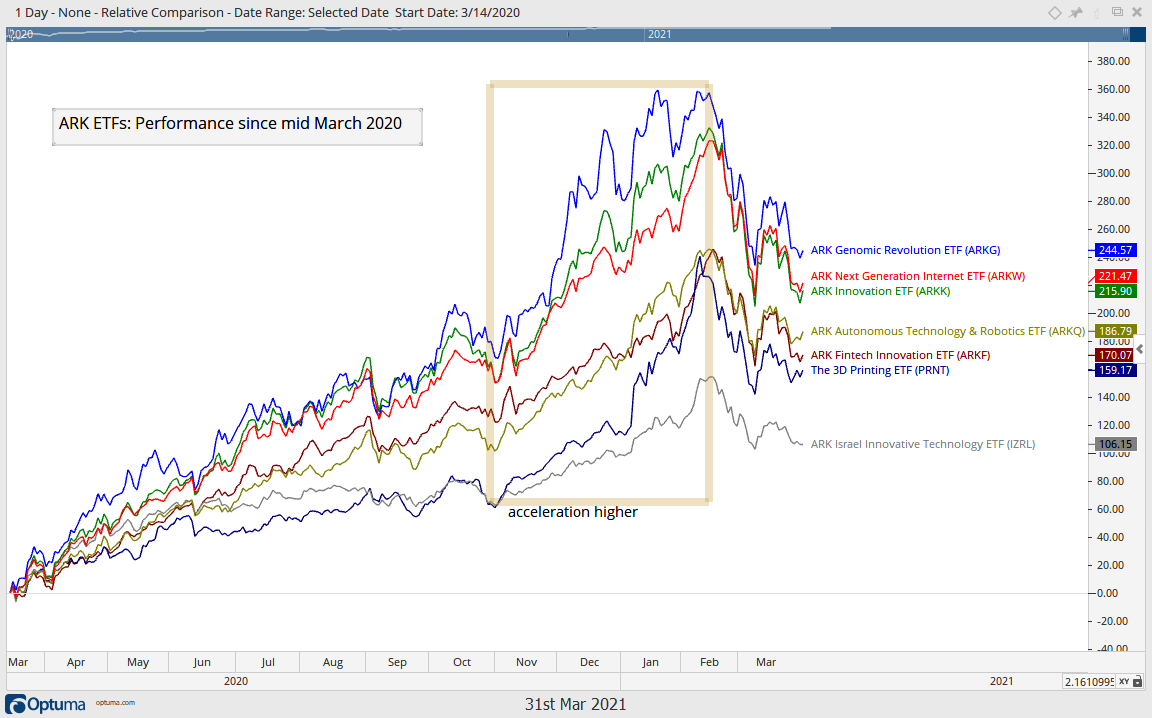 The second relative comparison chart shows year-to-date performance with the red zone marking the peak in mid February. Four of the seven are still up year-to-date with 3D Printing, Autonomous Technology and Innovative Technology holding up the best. 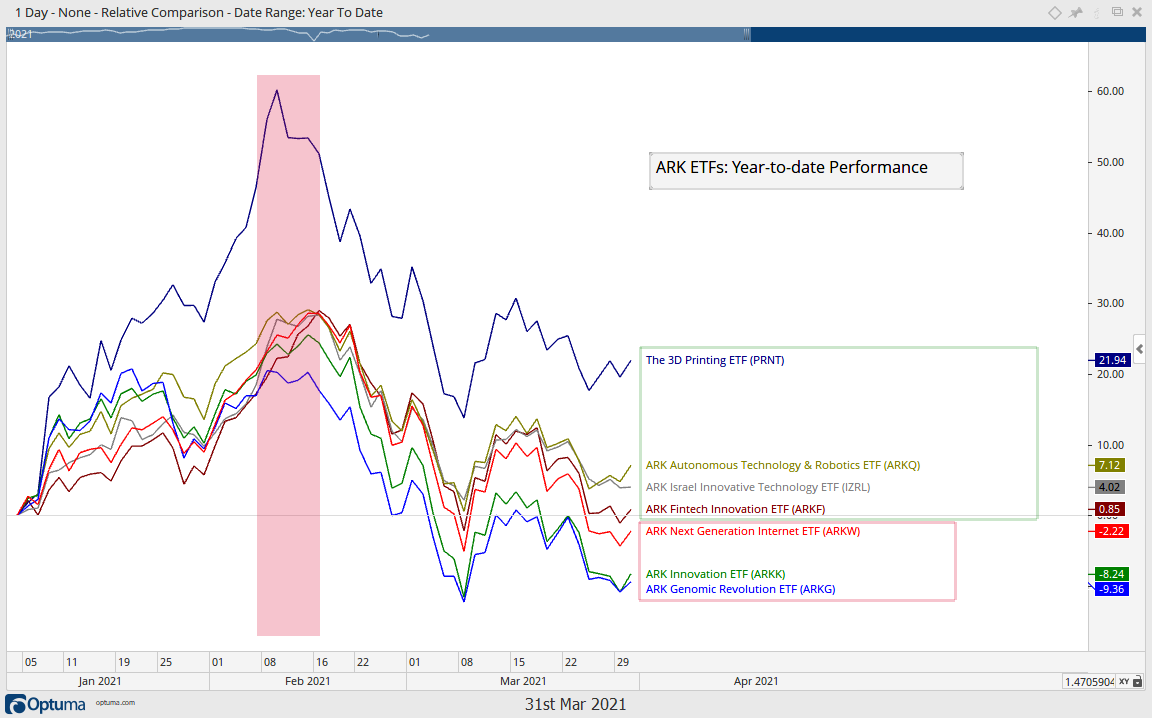 Note that these ETFs are some of the most volatile un-leveraged ETFs out there. Volatility translates into big potential and big risk.

The price charts look pretty much the same since November. All feature huge advances into February and big declines from this high. The declines, while big, are still considered corrections within a bigger uptrend. The percentage move is not what matters here. Instead, we should put the decline into perspective and compare it to the prior advance. A huge advance deserves a proportionate correction. Here is what we need to ask: is there a two steps forward and one step backward sequence at work? We can also throw in indicators, such as StochClose and the 200-day SMA for a little back up. Note that all seven ETFs are above their rising 200-day SMAs.

The first chart shows the ARK Fintech Innovation ETF (ARKF). The upper left chart shows the ETF moving straight up from the March 2020 low to the February 2021 high. The dot-line chart in the big window shows a steady zigzag advance from July to January and then a 20+ percent surge featuring 11 straight up days (yellow zone). This is what a blow-off top or parabolic move looks like. ARKF fell sharply after this surge, bounced in mid March and is testing the 8-March low with a decline in late March. 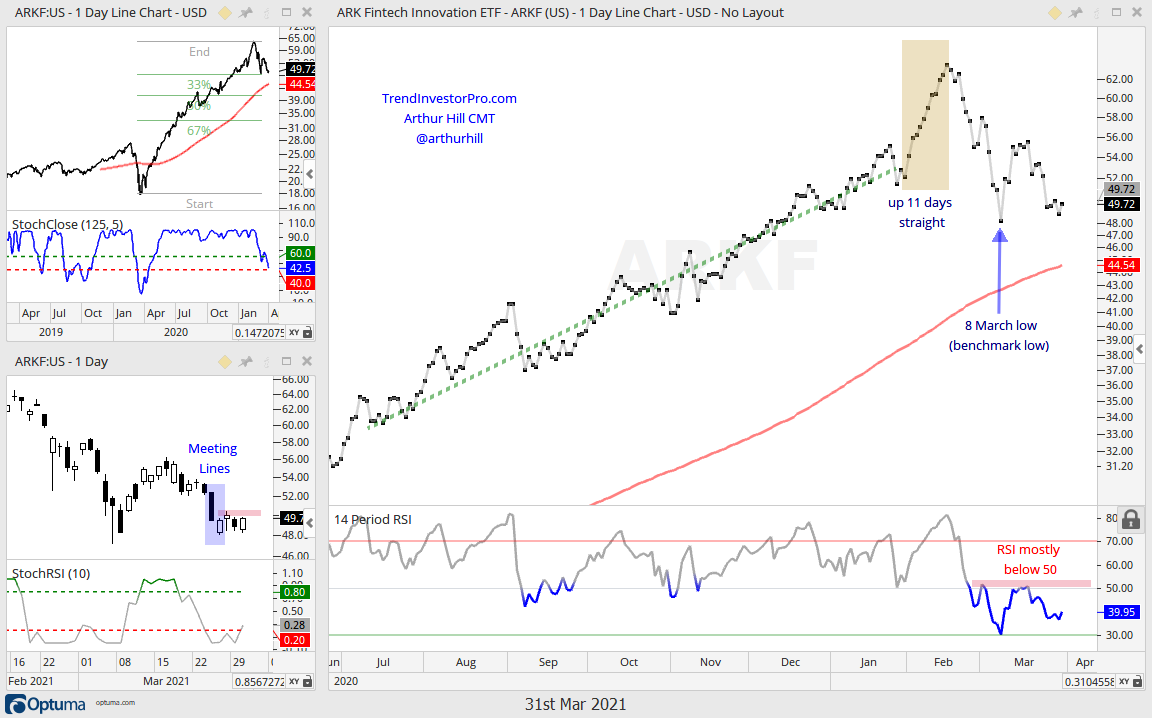 The March 8th low is a bench mark low. ETFs that held well above this low on the late March decline show relative strength (QQQ, XLK, IGN). ARKF tested this low and does not stand out or show clear relative strength. The indicator window shows RSI spending most of its time below 50 since late February. A break above 55 is needed to turn momentum bullish again.

ARKQ and PRNT Stand Out

The ARK Autonomous Tech Robotics ETF (ARKQ) and ARK 3D Printing ETF (PRNT) stand out somewhat because they held up a little better short-term and they are the furthest above their 200-day SMAs. They are the best performing ARK ETFs year-to-date. The next chart shows the ARK Autonomous Tech Robotics ETF (ARKQ) with a slightly higher low from March 8th to March 24th. The bottom indicator window shows price 21.28% above the 200-day SMA. An RSI move above 55 would be bullish for momentum. Short-term, a Meeting Lines candlestick pattern formed, which is a bullish reversal pattern. ARKQ followed through with a modest gain the last few days. 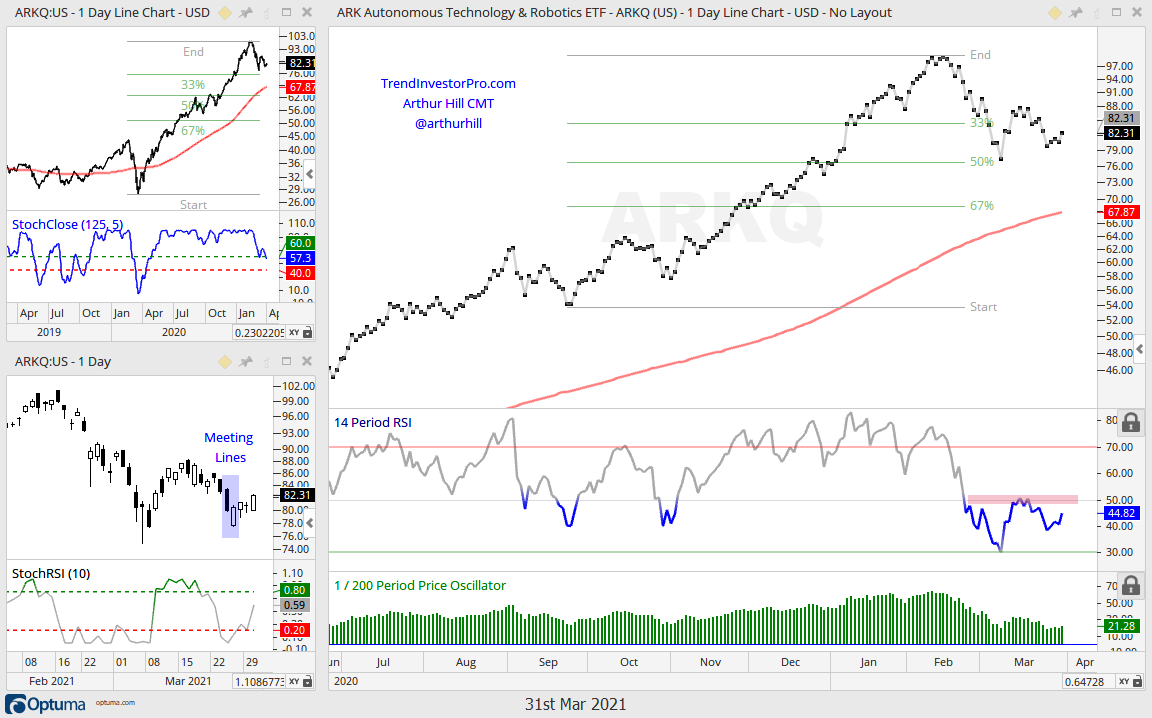 The next chart shows the ARK 3D Printing ETF (PRNT) with similar characteristics. Note that price is 28.3% above the rising 200-day SMA. 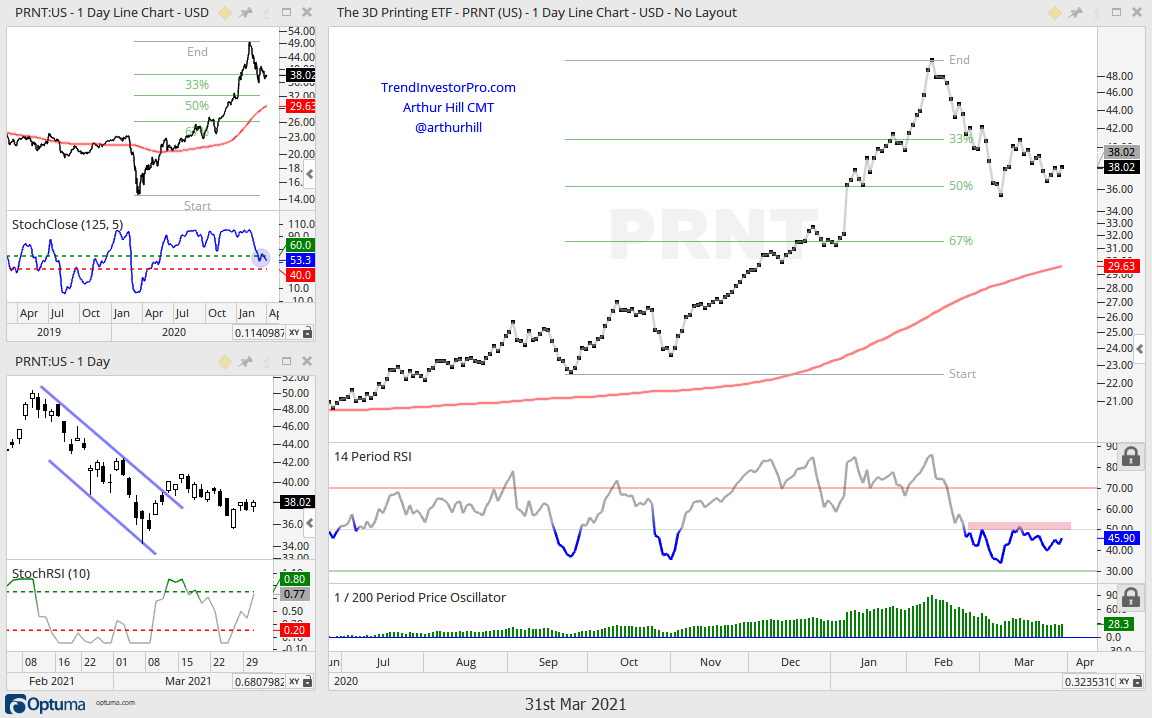 I should also note that the Global Auto ETF (CARZ) held up quite well over the last two months and simply consolidated with a triangle on the line-dot chart. A consolidation within an uptrend is a bullish continuation pattern and a breakout would signal an end to the correction. The candlestick window shows a reversal last week and bounce this week.  Note that several stocks in this ETF trade outside of the US and price is reacting to overseas trading when the US markets open. 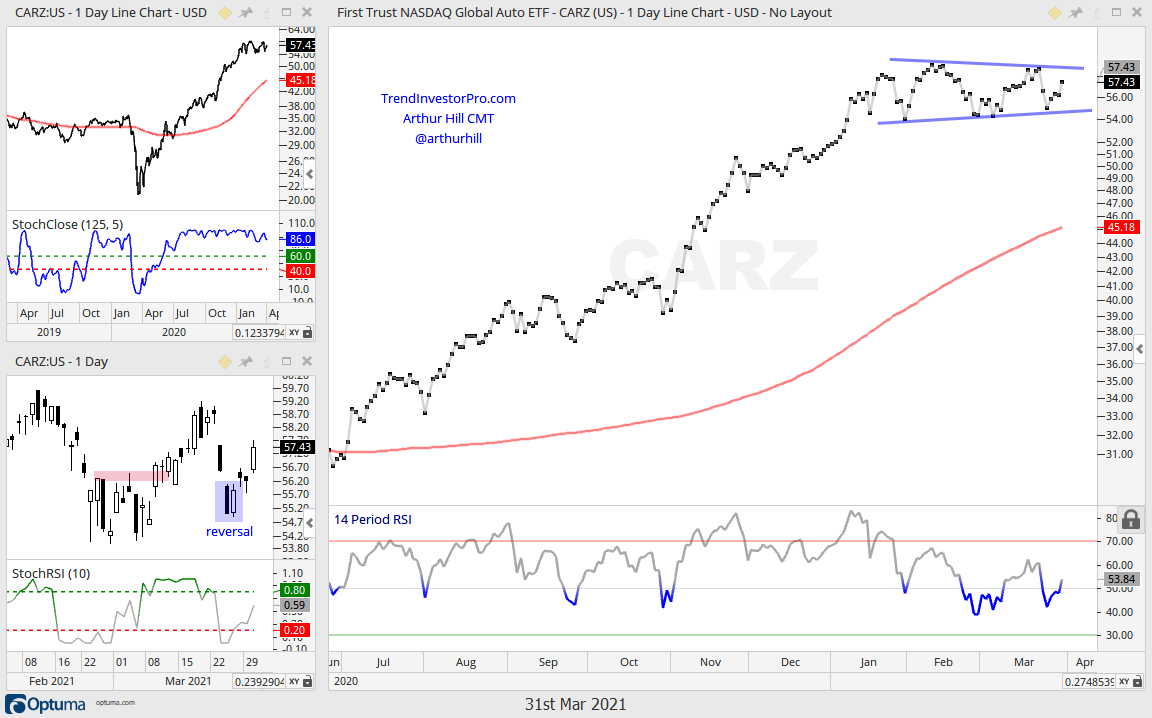 Please check out the chart poll (here) and vote for your preferred layout.