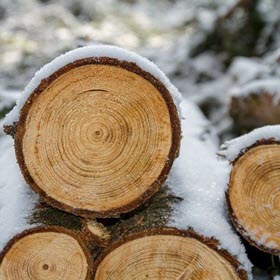 Today we start with an up and coming industry group ETF (cannabis) and then turn to some commodity-related ETFs. Gold and silver were clobbered in June, but both are firming in potential reversals zones and warrant a watch going forward. The timber and copper ETFs were hit hard, but they are quite oversold within bigger uptrends. And finally, the water ETF broke out and the telecom ETF has a similar pattern at work.

Cannabis Tries to Turn the Corner

Now to the charts. The first chart shows MJ with a 240% advance from September to February and then a 45% decline into early March. The ETF stabilized the last few months as a falling wedge of sorts took place. Also notice that MJ retraced 50-67 percent of the prior advance. Despite big moves up and down, both the pattern and retracement amount are typical for corrections within bigger uptrends. You know the drill. 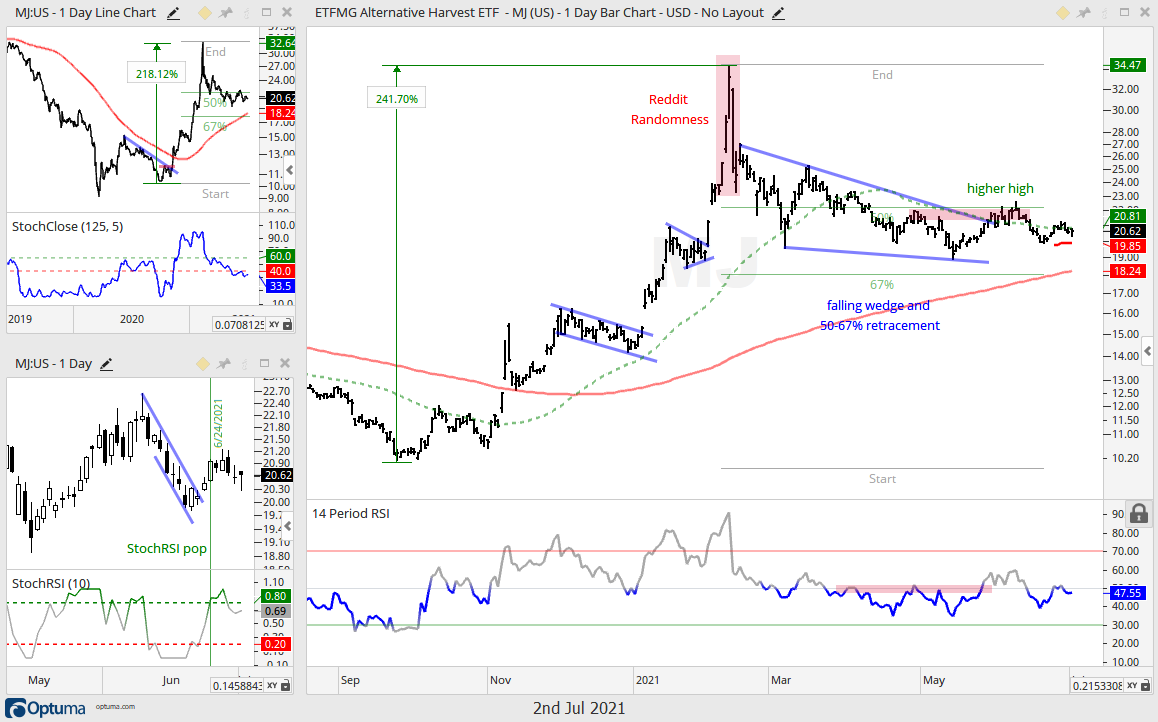 MJ bounced from mid May to mid June and forged a higher high that could start a new uptrend. The ETF then fell back and broke out of a steep falling flag on the candlestick chart (lower left). There was also a StochRSI pop on June 24th. The makings of a trend reversal are here. The red line on the bar chart shows the ATR Trailing Stop for reference. The second chart shows YOLO with a similar pattern at work. 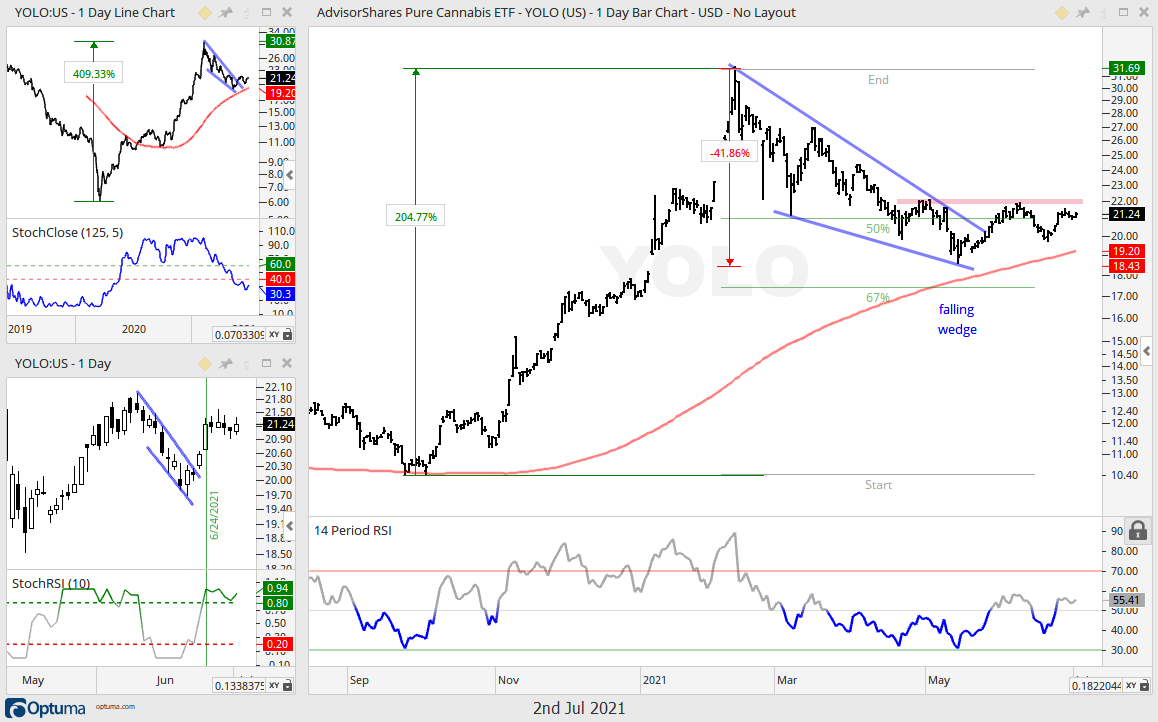 The Gold SPDR (GLD) is at an interesting juncture short-term, but the long-term picture remains negative. Long-term, GLD is below the falling 200-day SMA and the  price chart sports a series of lower highs since the August 2020 peak (chart upper left). The bar chart shows price at an “interesting juncture” because the recent decline retraced 67% of the prior advance and returned to the prior breakout. Normal pullbacks retrace one third to one half of the prior advance so this is a potential reversal zone. RSI also became oversold with a dip below 30. 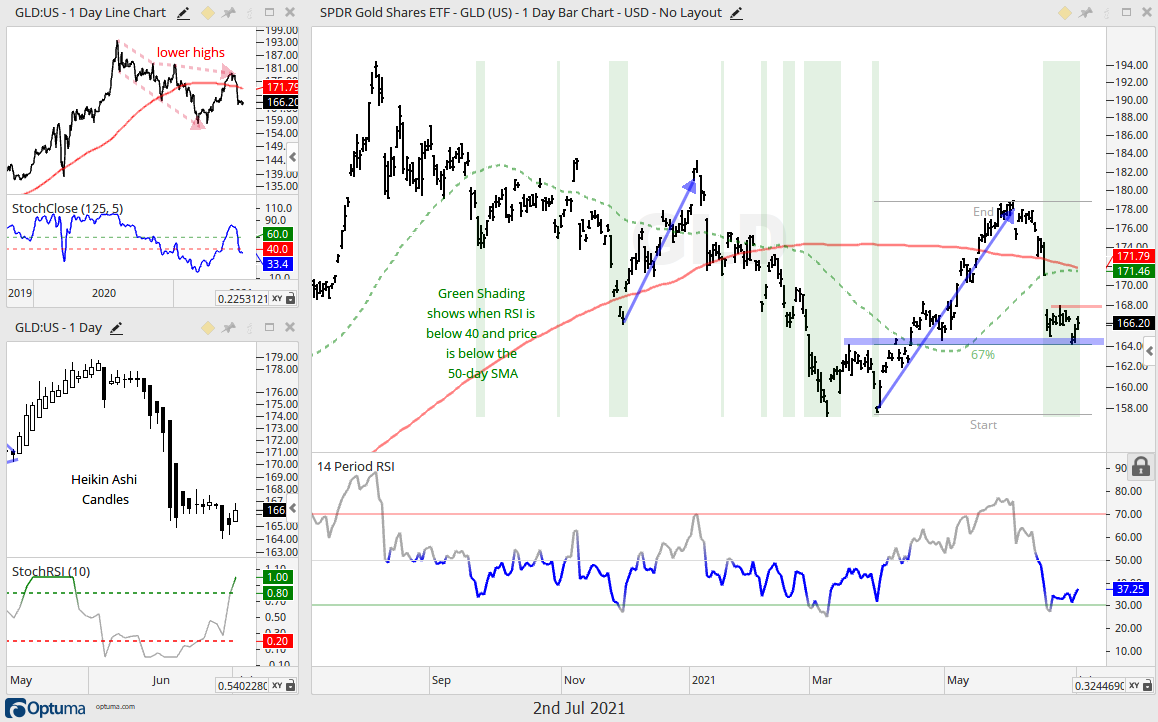 The green shading on the chart shows when RSI is below 40 (oversold) and price is below the 50-day SMA. Most of the bounces were short lived. The bounces in late November and late March extended (blue arrows). GLD is trying to firm in the 164-168 area. A breakout at 168 would be short-term bullish and argue for a bounce. Before considering such a setup, study the bounce failures in May-June 2018.

The next chart shows the Silver ETF (SLV) with a similar setup, except SLV is just above the 200-day SMA. Overall, SLV remains with a large triangle consolidation on the long-term chart and this is considered a bullish continuation pattern. The swing within the pattern is down after the gap down and break below the 50 day SMA, but SLV is also at that “interesting juncture”. The decline retraced 50-67 percent of the prior advance and returned to the 200-day. The red zone marks resistance at 24.50 and a breakout would be short-term bullish. Don’t forget that silver is just gold on red bull: they move in the same direction, but silver has twice the reward potential and twice the risk. 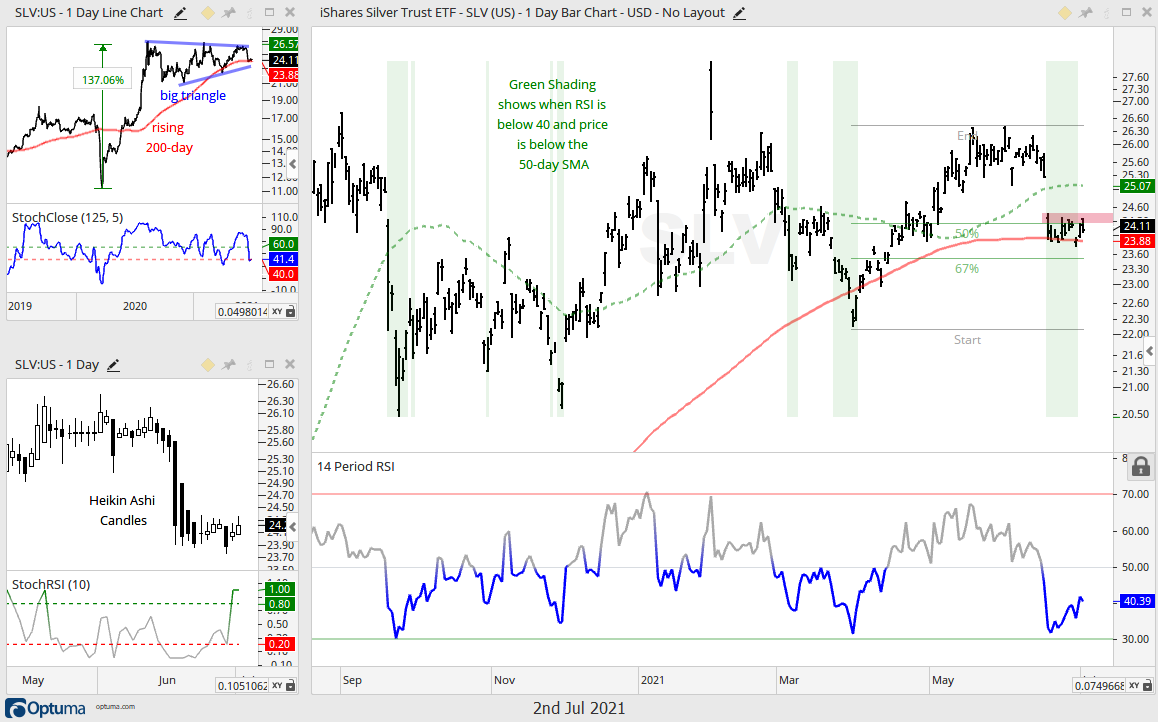 Timber and Copper with Deep Pullbacks

There were some deep pullbacks in the commodity related ETFs in June and RSI dipped below 30 for many. Normally, RSI(14) holds above 30 during pullbacks when the bigger trend is up. A dip below 30 shows strong downside momentum that is more associated with a long-term downtrend than an uptrend.

That being said, ETFs like the Global Timber Forestry ETF (WOOD) and Copper ETF (CPER) were up substantially from late October to mid May (over 50% in seven months). Big pullbacks sometimes follow big declines. The chart below shows WOOD retracing around a third of the prior advance with a steep falling wedge. The ETF broke the wedge line last week and there was also a StochRSI pop.  This is the first pop since the green shading started (RSI below 40 and price below 50-day). The 28-May pop was just before the green shading started. 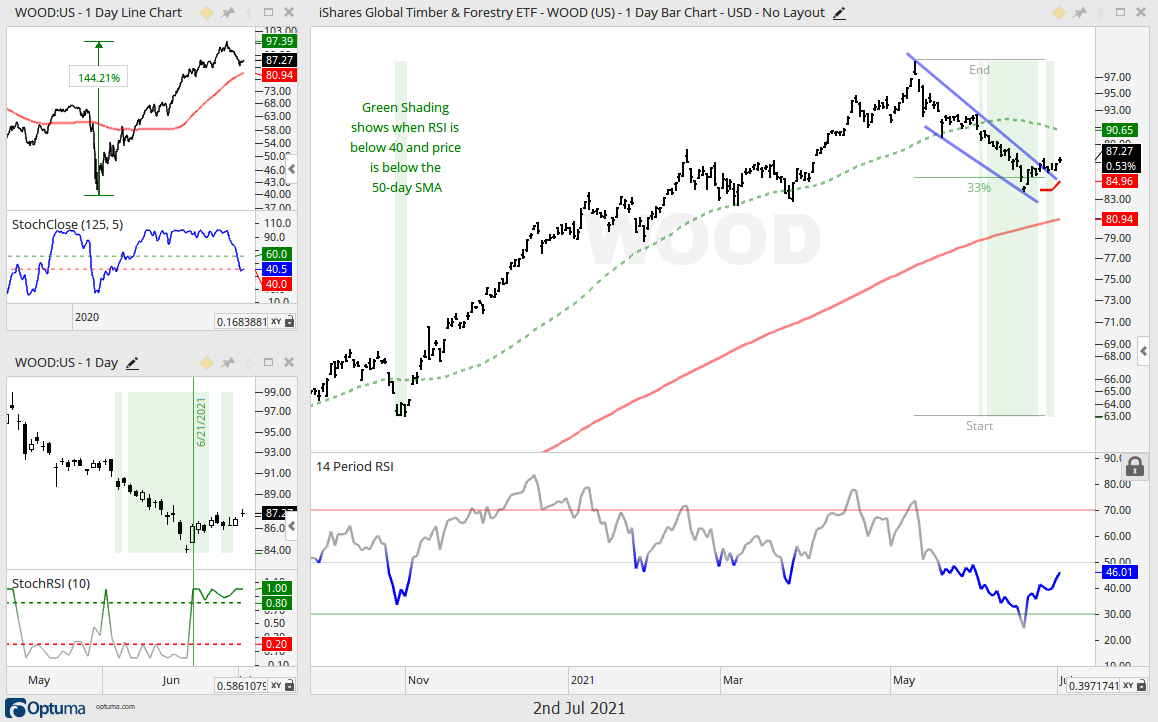 The next chart shows the Copper ETF (CPER). I cannot draw a nice falling wedge from the May high to the June low, but there is clearly a pullback after a new high (thick blue line). RSI dipped into the oversold zone (<40) and price dipped well below the 50-day SMA (green shading). A setup is in the making for a mean-reversion bounce (bounce within bigger uptrend). CPER bounced last week and then stalled to establish short-term resistance. A move above 26.8 would break this level and argue for a bounce. 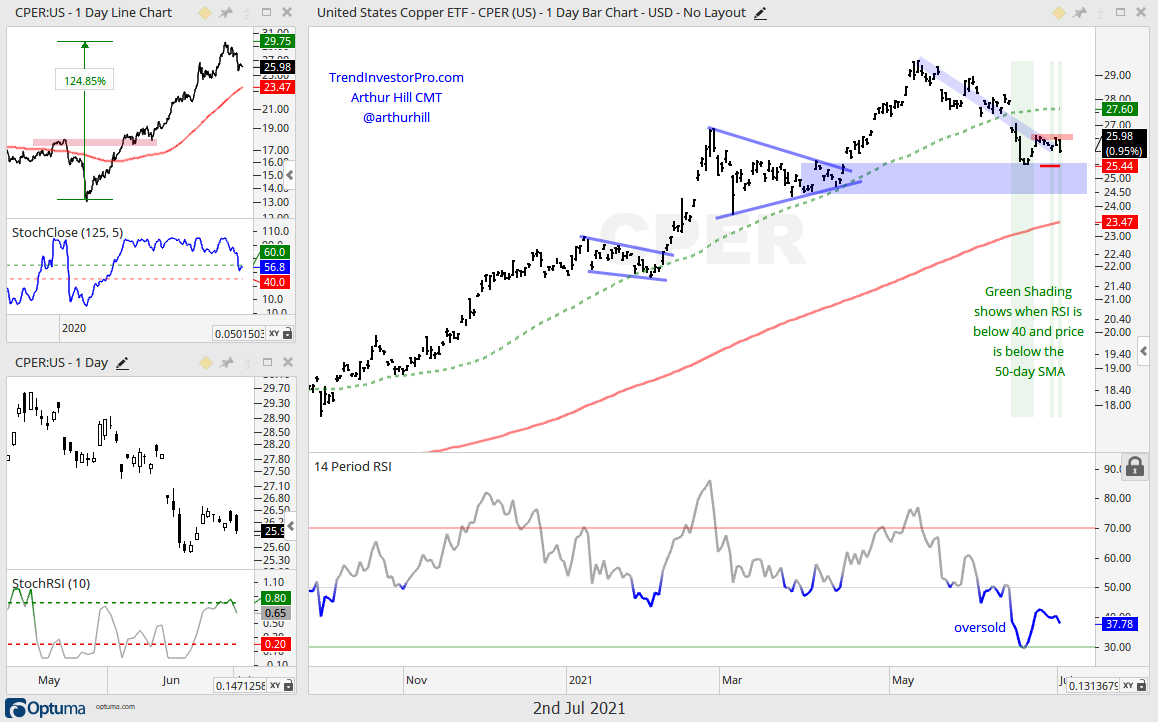 PHO Breaks Out - Is IYZ Next?

I highlighted the Water Resources ETF (PHO) last Friday and the ETF broke out this week. PHO is not the most exciting name out there, but the triangle within the uptrend was a bullish continuation pattern and the breakout signals an end to this consolidation – and a resumption of the bigger uptrend. The green shading shows when RSI is below 40 and price is below 50. These oversold signals marked the last two lows quite well. Note that this setup does not always work so well. 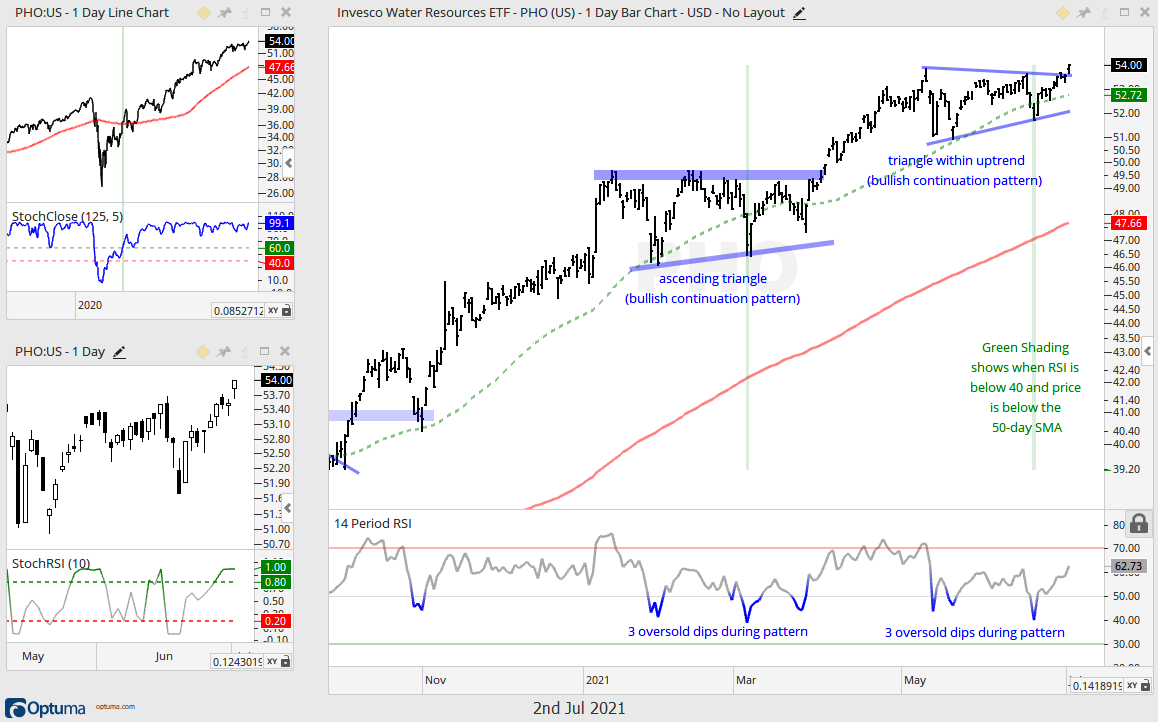 The next chart shows the Telecom ETF (IYZ), which is also not the most exciting name out there, with a similar setup. The trend is up and a triangle consolidation formed. This is a bullish continuation pattern and the ETF is already getting an oversold bounce. 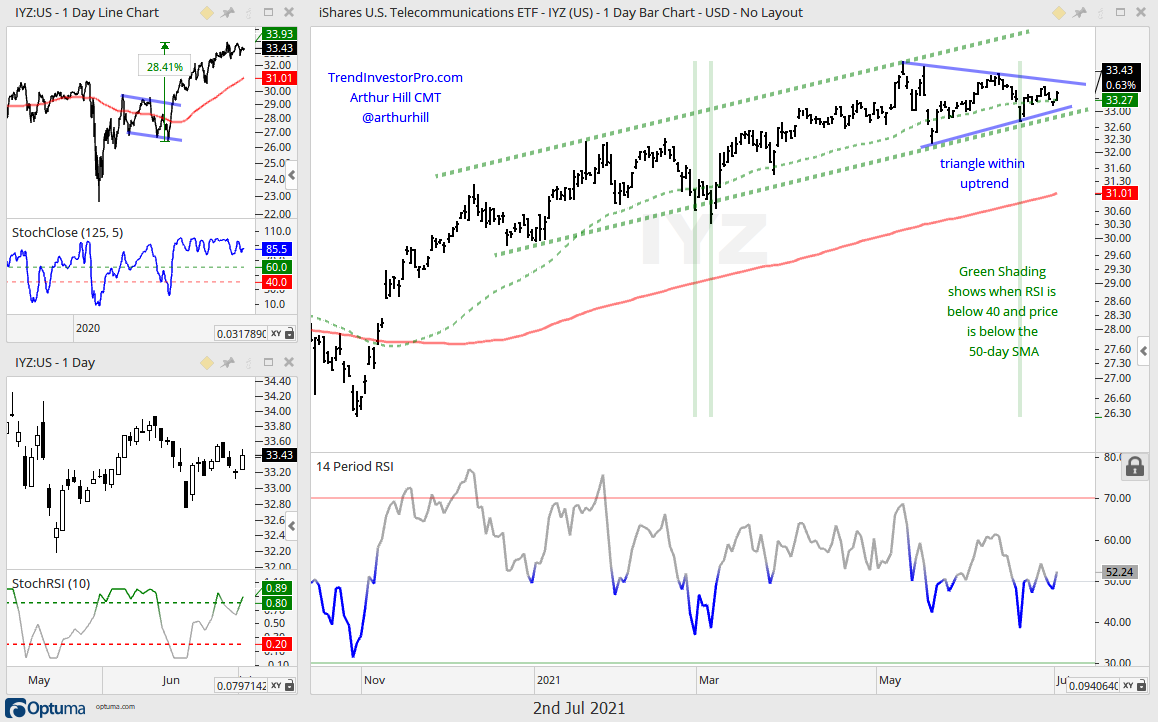