A Boring Stock with a Bullish Theme for 2020 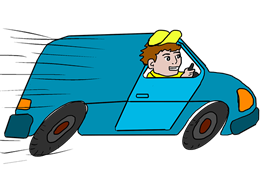 A theme is a fundamental trend that could influence a stock’s price in the coming months, or even years. As powerful as themes seem, they are still secondary to price action. There are many forces driving price movements and we cannot be expected to know them all. In addition, the fundamentals often become clear after price has moved. Yes, price movements often precede fundamental developments. This is why price charts are so important.

Amazon has some long-term bullish themes at work, but price action has been rather boring of late. The stock is dominating in retail and crushing it in the cloud with AWS. Furthermore, Amazon’s delivery network is also growing fast and is expected to deliver more packages than UPS or FDX by 2022. These are some bullish themes that could affect the stock price. But when?

Study the price chart for clues on the next move. Amazon caught my eye because it has turned rather dull the last few months. The S&P 500 is up over 10% from August to December and Amazon is flat. This shows relative weakness, but not absolute weakness. Even though AMZN is underperforming $SPX by a wide margin, selling pressure is clearly muted because the stock is flat, as opposed to down. 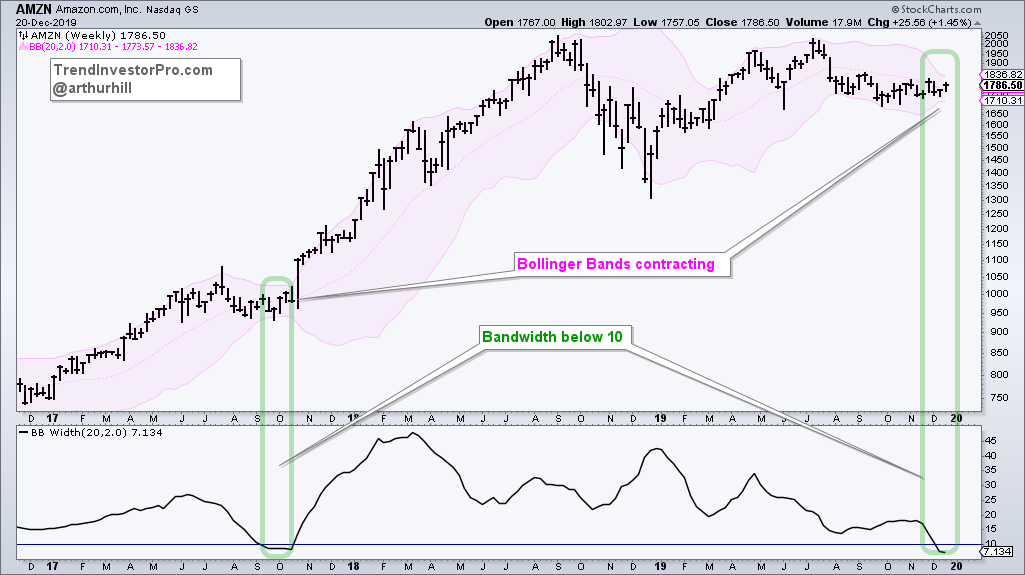 Bollinger Bands and BandWidth do not provide any insight on price direction. They just tell us when volatility is expanding or contracting. In theory, a volatility contraction, such as now, should give way to a volatility expansion and a sizable move. But which way?

The next chart shows Amazon with a bullish configuration. The stock almost tripled from November 2016 to September 2018 with a move from the 750 area to the 2050 area. A move like this deserves a rest and price moved sideways to digest these gains over the last 18 months. Within this sideways movement, I see a falling channel breakout in January 2019 and a break above resistance in April. 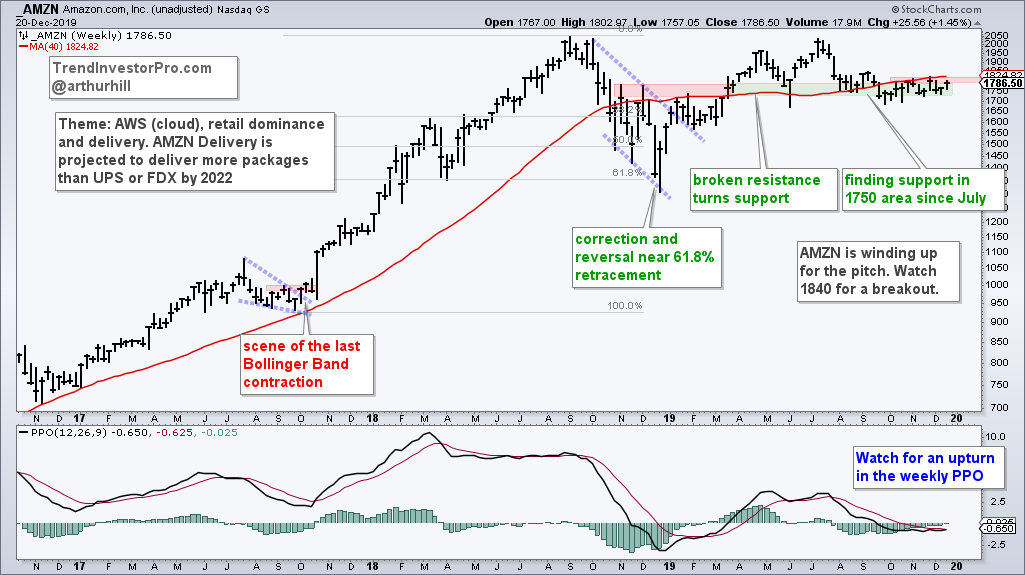 After a big advance in the first half of 2019, the stock peaked in early July and fell back to the prior resistance zone, which turns into support (technical analysis 101). AMZN held support as it traded within a very narrow range since October. I am now watching 1840 for an upside breakout. This would also put the stock back above its 40-week SMA, which is still rising. I would view such a development as bullish and then expect the stock to hit new highs in 2020.

Join myself, John Murphy and seven other top analysts from StockCharts for MarketVision 2020. Pre-registration is free and entitles you to a discount as well as access to the weekly webinars leading up to the main event, which is January 4th. Click here to register!

At trendinvestorpro.com this weekend, I featured seven other stocks with long-term uptrends and bullish themes as we head into 2020. In addition, I also covered the current uptrend in the S&P 500. It is strong, but has yet to get parabolic. I then showed three indicators to watch as we head into January. Subscribe today and get immediate access to these reports and the weekend video.