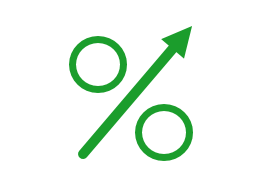 The surge in the 10-yr Treasury Yield is the talk of the town last week. The week prior it was the breakout in the Russell 2000 ETF and relative strength in small-caps. Is there a correlation between small-cap relative performance and Treasury yields? Today’s commentary will look at the relationship between the 10-yr Treasury Yield and the IWM:SPY ratio because these two have a pretty strong positive correlation.

The current evidence is bullish for small-caps as the Russell 2000 ETF (IWM) broke out of a big range last week and is starting to outperform SPY. The rise in the 10-yr Treasury Yield also creates a bullish tailwind for relative performance. Ratio charts are interesting, but they tell us nothing about absolute performance so keep your eye on the actual price chart for trading decisions.

This week at TrendInvestorPro, I also look at the relationship between the 10-yr Treasury Yield and the Regional Bank ETF (KRE) as well as the Nasdaq 100 Next Gen ETF (QQQJ). Do rising yields influence stocks with high valuations? This week’s reports also cover the recent breakouts in copper-related ETFs, long-term breakouts in old economy ETFs and the recent breakout in gold. Get all this an more with immediate access. Also check out our Trend Composite signals for S&P 500 stocks.